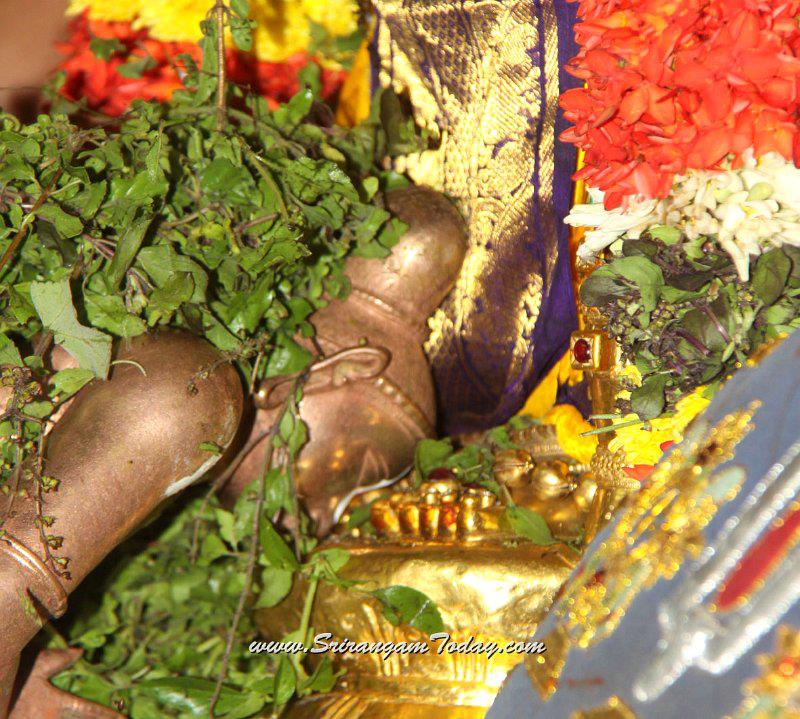 In the end – emperumAn who is opposite to all defects, abode of all auspicious qualities, identified by gyAnam and Anandham, having the best of qualities, wearing innumerable divine ornaments, having all weapons, the divine lord of lakshmi, bhUmi dhEvi and nILA dhEvi, having the divine feet which are always served by anantha, vainathEya et al who are fearing unnecessarily for him, residing in SrIvaikuNtam, lord of all, antharAthmA (in-dwelling soul) of brahmA and rudhra who are his properties, having the nature to unite with those who crave to see him and eliminate their cravings – AzhwAr cried out for such emperumAn and attained him and became free from sorrow and free from all hurdles; among the thousand pAsurams which came into existence due to AzhwAr’s forceful devotion, this decad is born in the form of anthAdhi (ending word in one pAsuram relating to beginning word of next pAsuram) due to AzhwAr‘s paramabhakthi which makes him unsustainable in separation from emperumAn; such AzhwAr says “those who are well-versed in this decad, being born in this samsAra, are at par with ayarvaRum amarargaL (nithyasUris)”.

avA – deep affection (of devotees)
aRa – to be satisfied
sUzh – due to engaging in endless union
ariyai – having the nature to destroy (the sorrow of separation)
ayanai – being antharAthmA (for hiraNyagarbha (brahmA), as per the understanding in “kAryam jaimini:” [identify the root cause for the result], as expounded by pUrva pakshi (one with opposing view) and to be attained by mukthAthmAs)
aranai – being the ultimate goal and antharAthmA of rudhra who is the goal for followers of pASupatha school of thought
alaRRi – crying out (due to the urge in attaining him)

(due to attaining the goal)
avA aRRu vIdu peRRa kurugUrch chatakOpan – nammAzhwAr of AzhwArthriunagari whose desire was fulfilled and who got liberated
sonna avAvil andhAdhigaLAl ivai Ayiramum – these thousand pAsurams which are mercifully spoken in anthAdhi form
mudindha – ended (in the form of great parabhakthi (stage of full visualisation))
avAvil – in the desire
andhAdhi – anthAdhi poems
ippaththu – this decad too
aRindhAr – those who meditated  [some portion missing here in the original text]
piRandhAr uyarndhE – born great [some portion missing here in the original text].

nammAzhwAr of AzhwArthriunagari cried out with deep affection and became satisfied by the endless union of hari who is having the nature to destroy, antharAthmA for brahmA and the ultimate goal and antharAthmA of rudhra who is the goal for followers of pASupatha school of thought; his desire was fulfilled and he got liberated; he mercifully spoke these thousand pAsurams in anthAdhi form; those who meditated upon this decad of anthAdhi poems, in the state of having his desire fulfilled, among those thousand pAsurams, are born great. “avAvaRach chUzh ari” is also explained as “one who fulfills the [devotees’] desire which captivates him by surrounding [the devotee] with his qualities, and accepts [the devotee]”.

In this manner, AzhwAr mercifully explains the mahA vAkyam (the great prophecy) of the prabandham – “Sriya:pathiyAna nArAyaNanukku prakAra bhUthanAna chEthananukku upAyathvEna pravruththanAykkoNdu anishta nivruththiyaiyum ishta prApthiyaiyum paNNum” (For the chEthana (sentient being) who is a prakAra bhUtha (attribute) of nArAyaNa who is Sriya:pathi, emperumAn will remain the means and will perform anishta nivruththi (elimination of unfavourable aspects) and ishta prApthi (fulfilment of favourable aspects) along with the principle inside this mahA vAkyam, that is artha panchakam (five principles) such as brahmam which is to be attained etc) and completes the prabandham showing everything to be bhagavAn’s prakAram (form).

In this, in the first and second centums, bhagavAn’s SEshithvam (lordship) along with rakshakathva (saviourship) and bhOgyathva (enjoyability) are explained; in the third and fourth centums, SEshathva (servitude) in the form of being enjoyed by him only and being dear to him only are explained; following these four aspects, as the exclusive nature of this lordship and servitude is explained, praNavam, where the first letter explains the lordship, the third letter explains the abode of servitude [that is, AthmA], ukAra which highlights exclusivity and which explains the service which connects the lord and the servitor, is explained.

In the ninth and tenth centums, the meanings of the last word (nArAyaNAya) are explained since these two centums explain bhagavAn’s sarvavidha bandhuthva (being all types of relationships), and attainment of the result where bhagavAn has kainkarya prathisambandhithva (being the recipient of service).

The meaning of mUla manthram (ashtAkshara manthram) which is the essence of all SAsthram, which was briefly explained in the first pAsuram, is explained elaborately in the rest of this prabandham.

Further, first explaining emperumAn’s Sriya:pathithva (being the lord of SrI mahAlakshmi), nArAyaNathva (being nArAyaNa the abode of all and the antharyAmi of all), explaining the many auspicious qualities of nArAyaNa such as Seela (simplicity), saulabhya (easy approachability) etc and gyAna (knowledge) etc, explaining [(some portion missing in original text) surrender at the divine feet] by the verb, and due to explaining the attainment of bhagavath kainkaryam which is the purushArtham (goal) after being freed from hurdles, the nature of SaraNAgathi (dhvaya mahA manthram) which has two sentences, are also explained in detail.

Thus, as this prabandham reveals in detail, rahasya thrayam (the three secrets) which are to be known by the servitor of bhagavAn, who has no expectation other than kainkaryam and has no means other than bhagavAn, this prabandham should be recited and meditated upon every day by the best among the noble devotees.

With this, the English translation to most beautiful thiruvAimozhi of the most exalted nammAzhwAr, comes to an end.

My heart-felt gratitude to SrIman nArAyaNan, AzhwArs and AchAryas for using me as an instrument in this enormous task.

This translation effort would not have been possible without the knowledge acquired from gOmatam SrI u vE sampathkumArAchAryar’s bhagavath vishaya kAlakshEpam. It is also important to recollect vELukkudi SrI u vE krishNan swamy’s kAlakshEpam (CDs) which were very helpful in times of need for clarity.

Special gratitude to puththUr SrI u vE krishNaswAmy iyengAr’s publications with arumpadha urai (notes) which were very helpful during translation. The value of arumpadham is mostly underrated – but they greatly help in understanding complex aspects in the vyAkyAnams.

prapanna vidhvAn SrI u vE purushOththama nAidu’s eettin thamizhAkkam (thamizh translation of eedu) played a significant role in this translation effort. All the pramANams are well gathered and explained in thamizh, which makes it easier to translate them in to English.

Finally, I am very thankful to SrI T N krishNan swamy for his proof-reading which eliminated several typos and grammatical errors and his constant support in improving the translations.

Also, I am greatly elated that, by bhagavath sankalpam, this translation effort completed on panguni bharaNi, on the monthly thirunakshathram of asmadhAchAryan, SrImath paramahamsEthyAdhi pattarpirAn vAnamAmalai rAmAnuja jIyar, exactly one month before his annual thirunakshathram, chithrai bharaNi. Without his blessings, this would not have been possible.

Praying to emperumAn, AzhwArs and AchAryas for more such kainkaryams.

thAr Ar thada thOLgaL uL aLavum kai nItti – getting the divine huge shoulders, which are adorned with a garland, to go right down to the bottom of the pot
ArAdha veNNey vizhungi – eating butter, which does not satiate him (however much he eats)
arugu irundha – lying beside (the pot of butter)

thAr Ar thadam thOLgaL – due to the strong desire in butter, just as it is said in thiruvAimozhi 1-9-7 “thOLiNai mElum” ((thuLasi garland) on the two divine shoulders) he dropped his hands inside the pot of butter such that the garland on his shoulders were pressed against the pot. Didn’t nammAzhwAr too say in thiruvAimozhi 1-8-5 “vaigalum veNNey kaikalandhuNdAn” (he always ate butter by inserting his hand to the full extent that it would reach inside the vessel)!

uLLaLavum kai nItti – he extended his hand deep inside, since he thought childishly, that deeper that his hand goes, more will be the butter that he could grab and fuller would be his stomach. nanjIyar, disciple of parASara bhattar (son of kUraththAzhwAn), asked bhattar “How did yaSOdhA know that he dug deep into the pot such that his shoulders touched the pot?” bhattar responded saying “She saw the mark of the sandalwood paste which she had applied on his shoulders, on the rim of the pot”

ArAdha veNNey vizhungi – the butter was such that how much ever he ate of it, he wasn’t satiated. The butter which he ate initially, acted like a medicine which increased his appetite, thus making him to eat more and more of it.

vizhungi – swallowing the butter, without leaving anything.