In the end, AzhwAr says “Those who are experts in this decad will become enjoyable for the residents of thirunAdu (paramapadham)”.

andham il pugazh – being with endless qualities
ananthapura nagar – residing in thiruvananthapuram
Adhi thannai – the cause of all
kondhu – flower bunches
alar – blossoming
pozhil – surrounded by garden
kurugUr – controller of AzhwArthirunagari
mARan – nammAzhwAr
sol – mercifully spoke
AyiraththuL – among the thousand pAsurams
aindhinOdu – along with the five pAsurams (which are advice for others)
aindhum – the five pAsurams where he adviced others as well as self
vallAr – those who can practice
pOy – going (in archirAdhi mArgam (path leading to paramapadham))
amar ulagil – in the abode of paramapadham, which is the dwelling place of “ayarvaRum amarargaL” (nithyasUris, mukthAthmAs)
paindhodi – being decorated with ornaments in their arms
madandhaiyar tham – divine apsaras (celestial damsels), their
vEy maru – distinguished like bamboo
thOLiNai – the brahmAlankAram (ultimate decoration) which is done by their shoulders (hands)
aNivar – will get to accept.

nammAzhwAr, the controller of AzhwArthirunagari, which is surrounded by garden with blossoming flower bunches, mercifully spoke on emperumAn, the cause of all, who is residing in thiruvananthapuram with endless qualities, five pAsurams as advice for others and five pAsurams as advice for others and self, among the thousand pAsurams; those who can practice this decad will go and reach the abode of paramapadham , which is the dwelling place of “ayarvaRum amarargaL“, to accept the brahmAlankAram (ultimate decoration) which is done by the distinguished bamboo like shoulders of the divine apsaras who are decorated with ornaments in their arms. thodi – bangles.

Thence the divine deed of bhagavAn in his greatest incarnation as SrI rAma, which is capable of reviving a dying soul, is hailed. Although possessing all wealth, since his divine auspicious qualities are highly opulent, he is called ‘parardhdhi:’.

Although bhagavAn is the only supreme entity ruling over all others, he is compared to some lowly demigods for a miniscule of his original qualities in his incarnation as SrI rAma.

“He greatly resembles vishNu in valor. In his affable appearance, he resembles the moon”, etc.

“SrI rAma’s qualities cannot be described with mere words. his greatness never diminishes. He is perceptible only by the highest vEdhas, and resides in the hearts of all dhEvas and all other entities. He is indeed the one who destroys all our enemies”, et al.

The manthra varNas hailing SrI rAma address him as ‘bhagavAn’ – indicating opulence of all divine and auspicious qualities in him.

Etymology: Since SrI  rAma is ever filled with an abundance of superior and auspicious qualities, and shows his absolute supremacy at all times.

To elaborate further, the same point is reinforced with this divine name ‘paramaspashta:’. His absolute supremacy can be clearly seen in various occasions.

This is shown in SrImath rAmAyana by mandodari when her husband rAvana was killed by SrI rAma. While grieving her husband’s death, she praises rAma thus: “This rAma is clearly showing himself as verily the supreme and eternal godhead nArAyaNa”.

The same SrImath  rAmAyana also hails rAma thus: “He is verily the sun to even the sun god”, et al.

Etymology: The one whose absolute supremacy is very clearly seen even in his incarnation as SrI rAma is called ‘paramaspashta:’.

bhagavAn rejoices his attainment of the status of being daSaratha’s son much more than his absolute supremacy itself. Thus, he is called ‘thushta:’.

Etymology: The one who is highly contented with his attainment of the status of being daSaratha’s son, ruling over the kingdom of ayOdhyA and acting like an ordinary human being (more than his absolute supremacy itself) is called ‘thushta:’.

Since SrI rAma is resplendent with an abundance of such great qualities, he is called ‘pushta:’. The SrImath rAmAyana says “…that SrI rAma, who is full of auspicious qualities”.

Etymology: The one who is replete with great qualities such as benevolence and the like is called ‘pushta:’.

This is as said in Srimath rAmAyanam thus:

Alternately, SrI rAma is hailed as ‘SubhEkshaNa:’ since his eyes are looked by each and every soul, and he looks at each and every soul. Again, SrImath rAmAyana supports this view thus: “He – who does not see rAma and whom rAma doesn’t see – shall be the most ill fated soul in this world, to the extent that he is disliked by himself the most”.

Etymology: The one who possesses pacific, long and wide lotus-like reddish eyes that show his excellence in disposition is called ‘SubhEkshaNa:’.

The one who attracts every soul with his divine forms and auspicious qualities is called ‘rAma:’. SrImath rAmAyana says thus:

The manthra varNas hailing SrI rAma say thus: “…that SrI rAma, who is attractive with his dark complexioned body like a beautiful water-lily blooming in the autumn season”.

Etymology: Since bhagavAn delights the individual souls with his auspicious sight, divine form and great qualities, he is called ‘rAma:’.

The grantor of boon – the four faced brahmA, the boon itself – the boon of immortality, and the seeker of such boon – the ten headed rAvana – all finally rest in SrI rAma’s actions. Hence, he is called ‘virAma:’ – the resting abode.

hanuman praises rAma’s valor thus in front of rAvana: “Even if the four faced brahmA, three eyed Siva, the thousand eyed indhra, and others come together in opposition, SrI rAma still remains invincible by all of them”

Etymology: The one who is causes the various entities to rest, such as the grantor of boon – brahmA, the seekers of boon – rAvaNa and others, and the boon itself – the boon of immortality and invincibility – is called ‘virAma:’.

Since SrI rAma is unattached to material pleasures such as rule of kingdom and the like, he is called ‘viratha:’.

Further, he is called ‘mArga:’. Here, it means that he is sought after by all the sages such as bharadhvAja maharishi and others.

Thus, these two names can be seen separately.

Alternately, the two words can be seen together to refer to a single divine name ‘virajOmArga:’ as well. This means he is the one who shows the individual souls the faultless path of mOksha.

This is shown in SrImath rAmAyana thus:

Etymology: By nature, since rAma is unattached to the material pursuits such as kingdom rule and the like, he is called ‘viratha:’. Also, since he is constantly sought after by sage bharadhvAja and others, he is called ‘mArga:’. In another version, the two words are combined into a single divine name ‘virajOmArga:’, meaning he is the one who shows us the faultless path of mOksha.

SrI rAma subjects himself to the orders of pious men and obeys them. Hence, he is called ‘nEya:’.

In the Srimath rAmAyana, it is shown thus:

In the sabhA parva of SrI mahAbhAratha, bhagavAn declares thus:

“Oh yudhishtira, perform the yajna that you so desire. When I am here to do good to you, you can appoint me for any work; I shall do everything that you order me to do”

In the udhyOga parva, he says: “Oh mighty one! I am at your behest. Tell me what I can do for you, and I shall do all that you order”

In the Srimath rAmAyana, it is also said about lakshmana thus:

“With the friendly attitude and extreme devotion of hanuman, lakshmana allowed himself to be easily lifted by that monkey, who is not even shaken by others otherwise.”

Etymology: The one who subordinates to his dearest pious devotees is called ‘nEya:’.

Although bhagavAn subordinates himself at the behest of the pious sages, yet the sages remain to be protected by bhagavAn only. This is shown in this divine name ‘naya:’.

“Oh rAma, although we perform fierce penance, yet we are under your protection just like an infant under the protection of its mother in her womb”

Similarly the pANdavas declare thus, although krishna says he is at their behest: “Oh krishNa, you are our lord, and we are in your refuge”.

Etymology: Since all sages are lead and protected by rAma, he is called ‘naya:’.

Thus ends the fourth centum (chathurtha Sathakam) in SrI bhagavath-guNa-dharpaNa, which is an explanation of SrI vishNu sahasranAma, by the scion of SrI hAritha clan, the son of SrIvathsAnga mishra (kUraththAzhvAn) – SrIranganatha by name, also called SrI parASara bhatta, who wrote this glorious commentary at the behest of SrI rangarAja.

The fourth centum is completed. 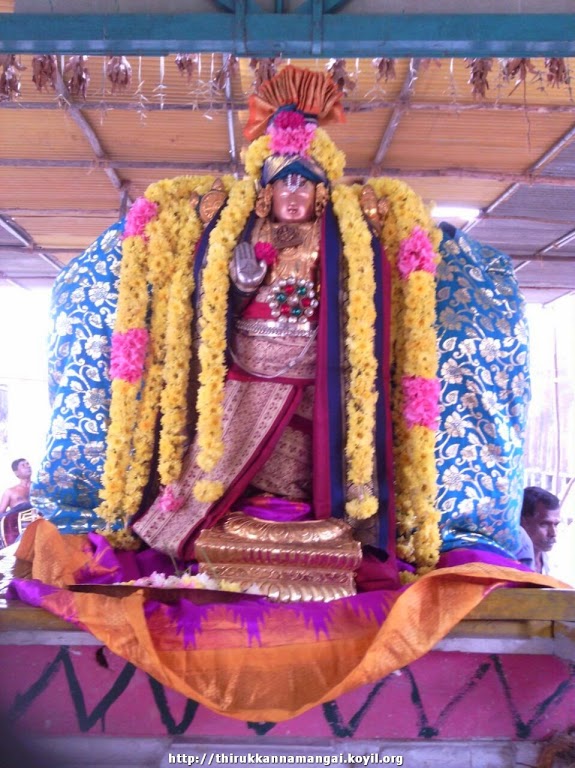 mAmalar mEl annam thuyilum – swans sleeping on distinguished lotus flowers
aNi nIr vayal Ali – thiruvAli, the divine abode, which has (agricultural) fields, full of water
ennudaiya innamudhai – the supreme enjoyer, who is giving me dharSan (for me to worship)
evvuL perumalaiyai – one who is reclining at thiruvevvuL (present day thiruvaLLUr) as if a huge mountain were reclining
kanni madhiL sUzh kaNamangai kaRpagaththai – one who is dwelling mercifully like a kalpaka vruksham (wish-fulfilling divine tree) at thirukkaNNamangai which is surrounded by newly built compound wall
minnai – one who has periya pirAtti (SrI mahAlakshmi) who is resplendent like lightning
iru sudarai – divine disc and divine conch which appear like sUrya (sun) and chandhra (moon)
veLLaRaiyuL – at thiruveLLaRai
kal aRai mEl – inside the sannidhi (sanctum sanctorum) made of stones

mA malar mEl annam thuyilum – the rAjahamsam (regal swan) and its female bird, desiring to engagein love-quarrel, choose a lotus flower and descend on it. The flower is also huge, capable of giving place for the love-quarrel. However, once they alight on the lotus, due to the softness of the bed (provided by the flower), they forget the quarrel and go to sleep. Since the flower provides comforts, which are given to regal members, such as softness, coolness, fragrance etc the swans sleep on the bed just like kings.

aNi nIr vayal Ali – at thiruvAli which has abundance of water bodies.

ennudaiya innamudhai – being the place of her (parakAla nAyaki’s) birth and the place that she entered after marriage, it became hers totally (when a land is cultivated on lease, the owner of the land gets a portion of the produce and the lessee gets the remaining portion; in this case, the entire benefit goes to one person, parakAla nAyaki).

evvuL perumalaiyai – one who is reclining in the divine abode of thiruevvuL like a mountain where no one can enjoy him, being satisfied fully.

madhiL sUzh – since he is a mangaLASAsanaparar (one who is engaged in praising emperumAn) he is feeling satisfied that even when he is engaging in madal, emperumAn is well protected.

How does emperumAn stand there?
minnai iru sudarai – he is like lightning and like sun and moon. This refers to emnperumAn standing there with pirAtti and with divine disc and divine conch.