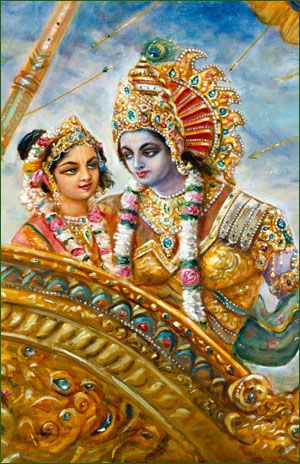 We have reached almost the mid-way of this pranbandham. It was felt that a recap of what we have covered till now would be apt now, before going ahead with the second half of the prabandham where parakAla nAyaki engages in carrying out madal on emperumAn.

thirumangai AzhwAr assumes a feminine mood, taking the name of parakAla nAyaki. She begins the prabandham by highlighting how emperumAn is reclining on the mattress of AdhiSeshan, thinking of ways to protect samsAris. She then describes his divine limbs and ornaments. She describes how brahmA, the deity ordained by emperumAn to continue with creation, gets to know the vEdhas (sacred texts) from emperumAn himself. She says that vEdhas enunciate that there are four purushArthams (ultimate benefits) namely aRam, poruL, inbam and vIdu (righteousness, wealth, pleasure and mOksham (liberation) respectively).

parakAla nAyaki’s ultimate aim is to reject the other three purushArthams and say that it is only kAmam (love towards emperumAn) which should be sought after by everyone.  In line with this, she takes up mOksham first, for rejection. She says that people say that there is a place called mOksham which can be attained only after giving up this body and taking up another body. For this, one has to carry out stringent penance, eating only dried leaves and fruits which fall on their own from the trees. Even when the ultimate benefit is attained, one has to go through the very hot sun, with a very narrow opening available for AthmA to pass through. vEdhas say that such and such person has attained mOksham, but there is no proof for it. The person who is said to have attained mOksham has not come back and said that he has attained mOksham or that it is like this.

Next AzhwAr, in the mood of parakAla nAyaki, takes up  aRam (righteousness), for which the benefit is swargam [heaven]. Here too, the jIvAthmA who desires to reach swargam, observes stringent measures in order to qualify for swargam. He has to carry out rituals such as jyOthishtOma yAgam. All these are similar to walking on a tightrope. Even if one makes a minute mistake in pronouncing the manthras while observing the ritual or misses a step, the punishment is severe. He could be born in the next birth as a brahmarakshas (a demon). However, on observing the rituals as ordained in the SAsthras, he goes to swargam where he is greeted by people enthusiastically. parakAla nAyaki describes how the land of swargam is, in all its details and how the AthmA who has reached that land enjoys the pleasures there. However, she cautions that this is not permanent. There is a countdown to the stay of the AthmA in swargam from the first day that he reaches there and one day, when his turn comes, he is pushed down back to samsAram. Hence, she says that aRam is also not dependable.

She then takes up the benefit of poruL and says that this too is similar to aRam in that it gives lowly benefit which is not permanent. Thus, parakAla nAyaki says that it is only kAmam which is the purushArtham to be coveted. She says that we should remain steadfast on the path of love towards bhagavAn which is well established and not on the path of lust which is the lowly benefit one accrues out of following bodily lust, just like the paths of righteousness and wealth.

Having now focussed on kAmam, parakAla nAyaki laments that she is now separated from emperumAn and wants to join with him. She says that women are allowed to engage in madal in order to attain their beloved. madal is an activity in which a person (male or female), having been separated from his or her partner, draws a sketch of the beloved on a palm leaf, sits on a horse made of palm leaves, pulled by children in the town and goes through the town telling everyone how his or her beloved is not bothered about him or her, talks ill of the beloved and pleads with the people to help him or her in being united with the beloved. parakAla nAyaki, desirous of engaging in madal, says that thamizh literature does not allow a woman to engage in madal while samskrutham language allows this. She thus rejects thamizh culture and literature and vows that she will engage in madal, following the samskrutham literature.

She cites incidents from SrI rAmAyaNam and mahAbhAratham to strengthen her case of engaging in madal. From SrI rAmAyaNam she says that sIthAppirAtti did not stay back in ayOdhyA when SrI rAma went to the forest but followed him. In mahAbhAratha, she cites the story of vEgavathi who opposed her brother and went to her beloved to unite with him. She also cites the story of nAgakanni ulUpi, from Adhiparvam of mahAbhAratha, and how she united with the great warrior, arjuna. She then narrates the story of ushai , the daughter of bANAsura, and how she took her friend, chithralEkai’s help in uniting with anirudhdha, the grandson of krishNa. Finally, she cites the story of umA, the daughter of himavAn, uniting with rudhra, who she desired. She then says that it is not possible for her [in her current state where she is in distress having been separated from her beloved] to go on narrating such incidents where women had engaged in madal in order to attain their respective beloved. It would need a great personality such as sage vyAsa to recount all those and he too cannot state these in a brief manner but would have to narrate them just has he had narrated mahAbhAratha with a lakh and twenty five thousand SlOkas.

She then decides that she will engage in madal in order to attain her beloved, the emperumAn residing in the divine abode of thirunaRaiyUr.

We will now go back to the vyAkyAnams of periyavAchchAn piLLai and azhagiya maNavALpperumAL nAyanAr to continue from where we had left.