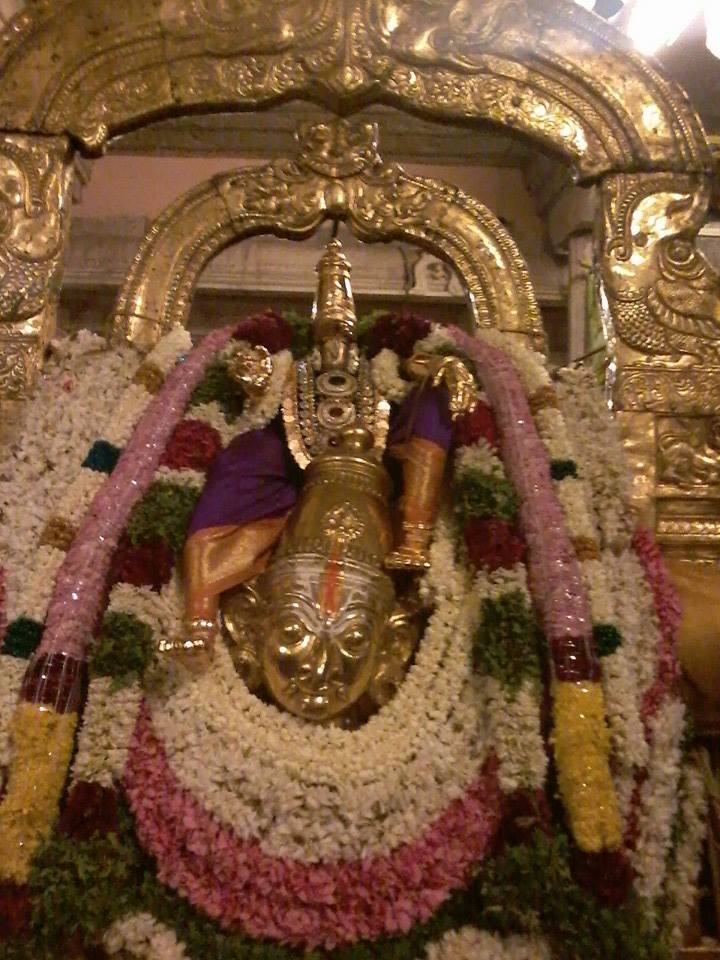 In the fourth pAsuram, parAnguSa nAyaki‘s friends say “While you are bold, you will lose everything” and as she could not have her desire to unite with him fulfilled, she says “What is there to lose? I have lost everything already”.

Subsequently, parAnguSa nAyaki says “Desiring to reach emperumAn who has the completeness in weapons for the elimination of hurdles of his devotees, I have lost everything; now what can I give him!”

(I)
kOl – beautiful
vaLai – bangles
nenjam – heart
thodakkam ellAm – etc
pAdu – in me
aRRu – without being subservient
ozhiya – to leave
izhandhu – lost
pal – many
vaLaiyAr – girls having bangles
mun – in front of
vaigal – for long time
parisu – my nature
azhindhEn – lost
ini – now
en – what
kodukkEn – shall I give?

emperumAn who is having amazing activities is standing in the beautiful thirukkuLandhai in the beautiful western side having mansions and forts with flags; he is atop periya thruvadi who is having beautiful movements; in his right hand, he is having the divine chakra which has been victorious in battles; with the desire to unite with him, I lost my ancient nature in front of the girls with bangles as my beautiful bangles, heart left me without being subservient; what shall I give now? Azhi valavan is also said as Azhi vallavan (one who is an expert in using the chakra); nenjath thodakkam is also recited as nenjath thuLakkam indicating the loss of relationship with the heart.