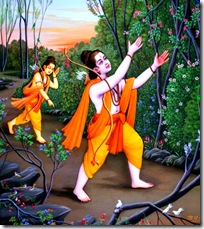 AzhwAr mentioned as to how he received the experience of enjoying emperumAn, without any distinction between day and night, in the previous pAsuram. He feels sorrowful in this pAsuram as to how he lost that enjoyment.

therindhu uNarvu – knowledge which can be qualified as knowing truly

onRu inmaiyAl – lacking in it totally

thIvinaiyEn – I, having cruel sins

pin thodarndha – one who followed

Azhi am kai ammAnai – emperumAn who had in his beautiful hand, the signet ring

kIzh nALgaLellAm – in the days gone by

vALA irundhozhindhEn – I had spent purposelessly

therindhu uNarvu onRu inmaiyAl – not having knowledge which can be truly called as knowing. The opinion is that AzhwAr feels that he did not have knowledge about matters relating to emperumAn but only had useless knowledge which enabled him to know “this is eight; this in ten”. SrI vishNu purANam 6-7-87 says “samgyAyathE yEna thathasdhOsham Sudhdham param nirmalamEkarUpam I sandhruSyathE vApyadhigam yathE vA thath gyAnam agyAnamathO’nya dhugtham II” (only that knowledge through which one is able to know, see or attain that entity which is without any fault, pure and shining is called as knowledge; anything other than that is ignorance). SrI vishNu purANam 1-9-41 says “thath karma yanna bandhAya sA vidhyA yA vimukthayE I AyAsAparam karma vidhyAnyA SilpanaipuNam  II ” (only that deed which is not a cause for bondage (in this materialistic realm) is called as deed; only that which is the reason for getting liberated is called as knowledge. The rest of the karmas are only for suffering; other knowledge is only apt for sculpting). Thus it was considered that only knowledge about emperumAn is to be considered as knowledge and that the rest of the knowledge is only equivalent to ignorance.

thIvinaiyEn – I, who had committed the sin of spending time purposelessly instead of experiencing enjoyment of emperumAn.

vALA irundhozhindhEn kIzh nALgal ellAm – I spent time purposelessly in earlier times instead of being a little bit favourable to emperumAn and receiving his mercy, just as one could pick up a few grains of paddy in a field which is fully matured with paddy cultivation.

karandhurivin ammAnai EththAdhu ayarththu – I should have praised and carried out service to emperumAn who was wearing the signet ring in his beautiful hand, during that time when he followed mAricha who came in the form of a deer, hiding his demonic form, at a time when iLaiyaperumAL (lakshmaNa) was also not around to help him. Instead of doing that, during the time of emperumAn’s vibhavAvathAra (incarnations) I spent my time purposelessly due to my ignorance. Since the reference is to chakravarththy thirumagan (divine son of emperor dhaSaratha), AzhwAr is mentioning about the signet ring that SrI rAmA was having in his beautiful hand. As per the boon sought by kaikEyi, SrI rAma had to remove all the regal paraphernalia (dress, ornaments etc); however, this signet ring alone escaped that boon and went with SrI rAma to the forest. Did it not get the fortune of being shown as the identification to sIthAp pirAtti through hanumAn! Considering that greatness, AzhwAr is referring to it as Azhiyangai ammAn.

EththAdhu ayarththu – the term Eththudhal here refers to praising emperumAn and as a consequence, carrying out service to him. It is pertinent here to recall that just as AzhwAr had desired to carry out service to emperumAn when he went in exile to forest, emperumAnAr (SrI rAmAnuja) too desired to carry out service to SrI rAma, as could be known from the following incident in his lifetime: A poet was composing poem to describe the action of SrI rAma who, while returning after killing the deceitful deer, kept his feet on tender leaves which he plucked from plants nearly and strew them on the path since his feet were hurting due to the scorching heat of the noon. On hearing this, emperumAnAr mercifully said “I was not fortunate to keep my head repeatedly in his path so that he could have walked over my head”

We will move on to the 83rd pAsuram.