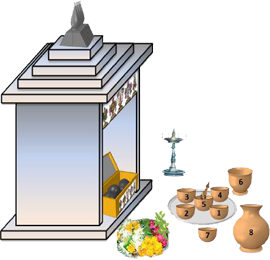 In the previous pAsuram, looking at the lowly state of others, AzhwAr felt very sad. In this pAsuram, AzhwAr redeems his heart and is overjoyed at the benefit that he had obtained, just as nammAzhwAr had mentioned mercifully in periya thiruvandhAdhi pAsuram 25 “ArAnum AdhAnum seyya agalidaththai ArAyndhu adhu thiruththal AvadhE” (let others do whatever they want. Is it possible for me to analyse what everyone is doing on this expansive earth and try to correct them?)

thAragaNappOr virithu uraiththa vem nAgaththu unnai – you thiruvananthAzhwAn (AdhiSEshan) who explained elaborately on the movement of groups of starts with the help of astrology. Here the term unnai (you) refers to emperumAn who is the indwelling soul of AdhiSEshan.

theriththu – knowing; understanding; meditating. Here, meditating  is the most apt meaning since it gels with the words which follow.

theriththu – initially meditating with the mind

ezhudhi – writing what has been meditated upon, through books

vAsiththum – reading what has been written by self as well as by others.

kEttum – hearing what has been told by great personalities such as mudhal AzhwArgaL (who had preceded this AzhwAr); also instructing disciples and making them to hear.

vaNangi – without having any pride thinking “I am so knowledgeable”, thinking that this is also due to his grace, bowing down to his divine feet, without any possessiveness.

vazhipattum pUsiththum – worshipping him through the three faculties of mind, speech and body. Since AzhwAr has used two words with similar meanings, AzhwAr hints that worshipping emperumAn is his prime method of spending time.

pOkkinEn pOdhu – there is nothing further to be done for uplifting the AthmA (soul). Others have been corrected to the extent possible. Now all that remains to be done for the time to be spent here is to engage in useful way. I did that by following the above, says AzhwAr.

AgavE thariththirundhEn – Thus, despite living in this cruel samsAram, I was able to exist. Alternatively, if asked as to the purpose for which he did this, AzhwAr would say, for the purpose of existing.