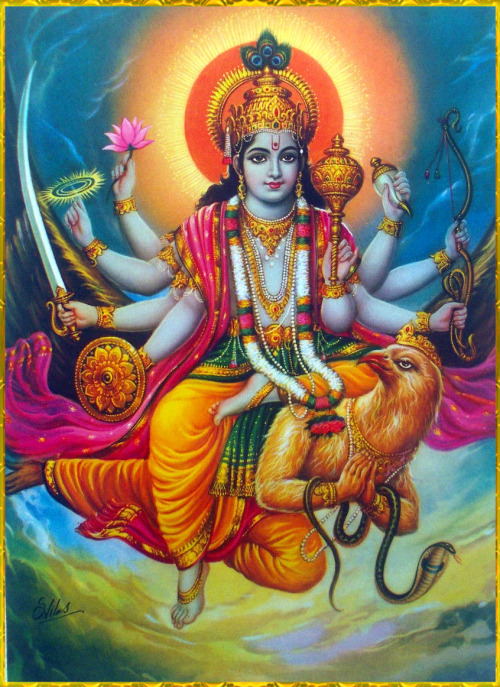 AzhwAr says that it is only the divine feet of emperumAn, who removes the enemies of followers, which are to be attained for us.

thotta padai ettum thOlAdha venRiyAn – once he holds the divine weapons in his hand, he has the ability to win at every place, without losing anywhere. AzhwAr says that he is the real great warrior who, holding his eight weapons (arrows, bow, mace, conch, sword, disc, shield and knob) is always victorious. AzhwAr says that if we have to get rid of our fears, should we not attain him?

attabuyakaraththAn – one who resides in the divine abode attabuyakaram, in kAnchIpuram. He holds the eight divine weapons on his eight divine shoulders and has taken residence there.

kuttaththuk kOL mudhalai thunja kuRiththeRindha – one who demonstrated by his action that he will get rid of our enemies and protect us.

kOL mudhalai – the powerful crocodile which pulled gajEndhran such that only its [elephant’s] mouth was above the level of water.

kuRiththeRindha – the disc was thrown (by emperumAn) at the target such that it would tear apart the crocodile without hurting the divine feet of gajENdhran inside the crocodile’s mouth. Instead of getting bewildered in the anxiety to protect gajEndhran, thrown at the target correctly.

chakkaraththAn – one who has the divine disc.

thAL mudhalE nangatkuch chArvu – his divine feet alone are our refuge. Just as ALavandhAr had mercifully mentioned in sthOthra rathnam 22 “thvath pAdha mUlam SaraNam prapadhyE” (I surrender at your divine feet), only the divine feet of one who helped SrI gajEndhrAzhwAn are auspicious and fit to be attained.

mudhalE – our assistance is not needed for us. Our assistance is something which will not only be of no benefit to us, they will also become inimical to us. If we are able to extricate ourselves from the role of protecting ourselves, that alone will become the reason for emperumAn to shower his grace on us. The destruction of one (our activity) will become the reason for another (emperumAn’s grace) to be born. Independence and subservience cannot coexist in the same person. Could one kingdom have two kings?

nangatku – for those who do not have strength on their own, emperumAn alone is the refuge.

We will move on to the last pAsuram of this thiruvandhAdhi, next.