The earlier pAsuram mentioned about emperumAn protecting his followers. In this pAsuram, it is mentioned that  even though emperumAn has attained everything, he still considers those materials which have been touched by his followers as the ones sustaining him. In each of his incarnations, he considers whatever materials sustain those who are born in that species as those which sustain him. As examples, when he incarnated as varAha (boar), the tuber kOraikkizhangu was his sustaining foodstuff and when he incarnated as krishNa (in the clan of cowherds), butter sustained him.

(thus, being the controller of universe)
thEn Agi – (for nithyars and mukthars, permanent dwellers of SrIvaikuNtam and those who have got liberated from samsAram and have reached SrIVaikuNtam respectively) being sweet, like honey
pAl Am – he will be enjoyable, similar to milk
thirumAlE – Oh the consort of mahAlakshmi!
An Aychchi – when born in the clan of cowherds who tend to cows
veNNey vizhunga – when swallowing butter
mun oru nAL – once upon a time
maNNai – all the worlds
umizhndha – spat out
vayiRu – the divine stomach
niRaiyumE – will it get filled-up?

vAn Agith thIyAy maRi kadalAy mArudhamAy – being the controller of all those who are living in the worlds, made of the five elements (sky, fire, water, wind and earth)

thEnAgip pAlAm thirumAlE – chAndhOgya upanishath 3-14-2 says “sarvarasa:” (emperumAn is sweet so that those who are in paramapadham (SrIvaikuNtam) can enjoy him). nampiLLai, with lot of involvement, will mercifully say that it is impossible to match the beauty of the way in which nanjIyar (his AchArya) would explain the line thEnAgip pAlAm thirumAlE. Thus, by the words vAnAgi and thEnAgi both nithya vibhUthi (spiritual realm) and leelA vibhUthi (materialistic realm) have been referred to. His status as the consort of SrI mahAlakshmi is superior to these two, in terms of his wealth.

An Aychchi vNNey vizhunga niRaiyumE – this line implies that even though he has no unfulfilled desires, there are still certain materials that he desires. Butter is more desirable to emperumAn than pirAtti’s (SrI mahAlakshmi’s) divine bosom. pirAtti’s bosom is for his enjoyment whereas butter is for his sustenance. Hasn’t nammAzhwAr mercifully said in thiruvAimozhi 1-3-1 “malar magaL virumbum nam arumpeRaladigaL – uralinOdu iNaindhirundhu Engiya eLivu – eththiRam”(how simple and amazing is the quality of our swAmy (lord) who is very much desired by pirAtti and is very rare to attain, who was tied down to a mortar and had a forlorn look!)

An Aychchi veNNey vizhunga niRaiyumE mun oru nAL maNNai umizhndha vayiRu – once upon a time, when there was deluge, you had saved the earth by keeping it in your stomach and later spat it out so that it could see other spatial bodies. Did you eat butter to fill up such a stomach (which held the entire earth within itself)?

An Aychchi veNNey –  cowherd women’s butter is just a material. It appears that kaNNan (SrI krishNa) would not eat the butter if the strength of smell of the cowherd clan is reduced even a little bit in the butter!

niRaiyumE – will it fill? Is it not required to stuff the entire expansive space inside the stomach with butter? Just as the samsAris will suffer because of deluge, kaNNan will also suffer if he does not get butter. It is said that piLLai uRangA villi dhAsar (a disciple of SrI rAmAnuja) would say that the space inside kaNNan’s stomach, which will not get filled up however much butter he eats, could be let out to washermen [the meaning implied here is that kaNNan’s stomach is similar to the washerman’s pot which will never get filled up however much clothes are filled in it for applying starch].

Let us take up the 93rd pAsuram next. 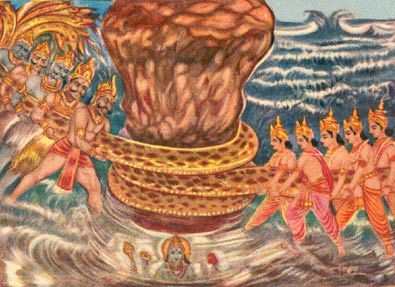 In the first pAsuram AzhwAr describes and celebrates emperumAn’s saundharyam (bodily beauty); and in the second pAsuram he says that the devotion towards emperumAn (which emerges from these auspicious qualities of Him) is so sweet , since this can be enjoyed here itself with this current body itself (instead of experiencing bhagavath anubhavam by reaching paramapadham with a different body); but when asked “what could be the measure for this devotion (towards Him)?”, AzhwAr replies that it begins with Him (servitude towards bhagavAn) and will be up to His devotees [servitude towards bhAgavathas].

mUnRru ulagam – the three worlds
neRi pada – to live in the path of righteousness (dharma)
kuRippil koNdu – (bhagavAn) who make sankalpam (divine will) in his divine heart
udan vaNangu – worshipped by all the people of the three worlds
thOnRu pugazh – having renowned fame
ANai mey pera nadAya – conducts his divine rules (Sruthi) in right way.
dheyvam mUvaril – among the three gods brahmA, rudhra and indhra
mudhalvan Agi – He is the foremost of the three gods.
sudar viLangu agalaththu – having shining bejeweled divine chest.
varai purai thirai – the waves as large as mountain
poru – to collide
peru varai veruvu uRa – to tremble even the giant mountain
urumu ural oli mali – roars like thunderclap
naLir kadal – the cool ocean
padam aravu arasu – with vAsuki (the king of serpents with expanded hoods).
udal – body
thadam varai suzhaRRiya – winding round the great mountain (mandhara) and churned the ocean
thani mAth theyvam – emperumAn who is distinctly supreme
adiyavarkku – to the bhAgavathas
ini nAm – here after ourselves
UzhithORuzhi – during every kalpa (eon).
OvAdhu – incessantly
ALAga – to become servitors
isaiyum kol – will it be possible (being servitors to His devotees)?

neRippadak kuRippil koNdu – As said in chAndhOgya upanishadh “thadhaikshatha – bahusyAm prajAyEyEthi“ (he vowed to become many forms and then creates the entire world), bhagavAn (in many forms) creates the entire universe with his own sankalpam (divine will); also explained said as – emperumAn desires that all other beings (sentient and insentient, except Him) should live in the path of righteousness (dharma) – to worship Him.

When asked “will there be some righteous people and some unrighteous (not worshipping Him)?”, AzhwAr replies,

ulagam mUnRu – To have everyone else other than emperumAn himself to surrender unto him. Though there are those who surrender and who give refuge [in this world], in the case of bhagavAn, all other beings (other than Him) should surrender at the holy feet of emperumAn.

udan vaNangu – Though the group of dhEvathAs are being worshiped by people, they don’t have the fame of being worshipped by everybody united together, but in the case of emperumAn and since He is distinctly unique (having renowned fame), everybody will gather together and worship Him.

When asked “ will this fame lie in a corner unknowable to anyone?” AzhwAr says,

thOnRu pugazh – It is popular that it is said even in the Sruthi (vEdham).

ANai meypeRa nadAya – unlike the others who have fault in executing the commandments, emperumAn is the one who makes his commandments perfectly.

“When asked who is He (who has renowned fame and perfectly executes his commandments)?”, AzhwAr says

dheyvam mUvaril mudhalvanAgi – He is the foremost of all the three dhEvathAs (Siva, brahmA and indhra), since he is the one who creates them from his divine navel and protects them by placing in his stomach during praLayam (deluge).

nadAya dheyvam mUvar – If the other dhEvathAs like rudhra, brahmA et al who are at times confused to be supreme, it is only because of His generous act.

mUvaril mudhalvanAgi – emperumAn who is distinctly unique from other two dhEvathAs (Siva, brahmA), rules their SarIram (body) and SarIri (AthmA) with his aprAkrutha thirumEni (divine body). Alternative explanation – Since brahmA, rudhra and indhra all together are said as three dhEvathAs in pramANam (authentic texts) and here emperumAn is said as the foremost (creator) of these three dhEvathAs.

varai purai … – Is this eloquent act of churning the milky ocean for nectar among other actions not enough to show that he is the worthy refuge?

thirai poru – when the waves collide with one another, it looks like two mountains are colliding with each other.

peru varai veruvuRa – To have the giant mountains tremble.

urumural oli – At that time, the noise which resembles the noise of thunder increases.

naLir kadal – [The cool milky ocean] Even though sparks flew while churning the ocean, it cooled down because of His merciful glance; implies that the ocean trembled without being agitated.

pada aravu arasu – The king of serpents, vAsuki – though it is a sentient being and is used for churning, due to being in contact with emperumAn, he did not feel any strain and hence expanded it’s hoods with joy while churning.

thadavarai – Placing the great mandhara mountain (which appears to cover the entire ocean) as the mortar.

suzhaRRiya – The ocean got so agitated to have the bottom soil rise up to the top, until the elixir is fetched (while churning), and moreover the mountain is placed in the middle and rotated up and down to make everyone who participated to claim “I churned it” [actually it was emperumAn who appeared with thousand hands and churned the ocean].

And when asked “are you desiring to surrender unto such emperumAn?”, AzhwAr replies,

adiyavarkku – emperumAn troubled himself for the purpose of those other dhEvathAs who desired for other benefits and gave them the elixir. SrIvaishNavas become overwhelmed by such greatly generous acts of emperumAn and present themselves to be fully existing for him. To such devotees.

ini nAm – While the jIvAthmA should have been the servant since its existence, due to karma (virtues/vices), we were occupied by the ahamkAra (ego) and mamakAra (possessiveness) until now; now that emperrumAn has shown our true nature of being servitors to such SrIvaishNavas, we who have seen it with his blessings.

When asked “ shall we desire to be in the similar grade/level of these bhAgavathas?”, AzhwAr replies,

ALAga – As their servitors.

When asked “should we be both servitors to them and at the same time be with ahankAram and mamakAram?“, AzhwAr replies,

ALAgavE – Only as a servitor being an embodiment of such servitude.

isaiyum kol – As said in nAnmugan thiruvandhAdhi 60 “ALpArththuzhi tharuvAy kaNdu” (Oh! lord you are in search of a person who has surrendered unto your divine feet), emperumAn is already seeking for such persons who will be ready to serve bhAgavathas, so no need to convince him; AzhwAr too is already convinced since he is always looking to serve bhAgavathas; so, what is the need for “isaiyum kol”? Since bhAgavatha SEShathvam (servitude towards bhAgavathas) is rare to achieve, AzhwAr is eagerly asking “if he will get it now”.

And this is not for a short time, but

UzhithORUzhi – It should happen in every kalpa (forever).\

OvAthE – Without even a momentary break. As SiSupAla et al were annihilated unable to bear the presence of bhagavAn when he incarnated here for the protection of samsAris even though he is avAptha samastha kAman (one who has no unfulfilled desires), SrIya:pathi (divine consort of SrI mahAlakshmi) and the lord of nithyasUris in paramapadham, now samsAris, without understanding the greatness of bhAgavathas, are failing due to considering them to be similar to self in thinking “as they too are walking around sustaining themselves by eating, drinking etc, just as we do, what is their distinction from us?”. Only when emperumAn can be considered as one amongst the created beings, a bhAgavatha can also be considered as one amongst samsAris.

Let us proceed to the 4th pAsuram next.