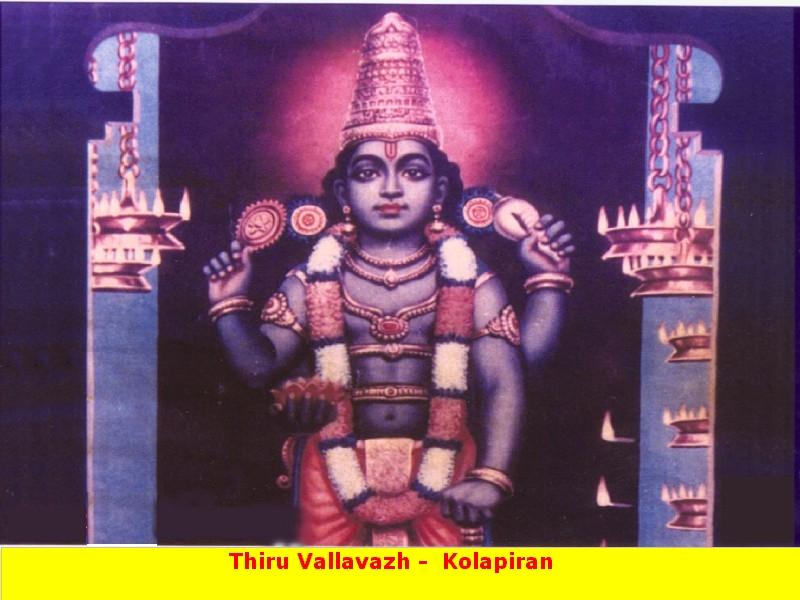 In the sixth pAsuram, parAnguSa nAyaki says “When will I see the very attractive divine feet of SrI vAmana who is mercifully standing in thiruvallavAzh?”.

pAN – in the form of song
kural – having rhythmic sound from the throat
vaNdinodu – with the beetles
pasum thenRalum – fresh southerly breeze
Agi – be
engum – in all places
sEN – tall
sinai – having branches
Ongu – rising
maram – having trees
sezhu – attractive
kAnal – having seaside gardens
thiruvallavAzh – in thiruvallavAzh
mAN – celibacy (which highlights his seeking aspect)
kuRaL – and having dwarfness
kOlam – having attractive form
pirAn – great benefactor’s
malar – blossomed
thAmarai – enjoyable like lotus
pAdhangaL – divine feet
kani – ripened like a fruit
vAy – having bright face with beautiful lips
madavIr – Oh friends who are obedient towards me!
vinaiyEn – having sin (to not interact with emperumAn as much as I desired)
kANbadhu – seeing him
engyAnRu kolO – when will the day be?

thiruvallavAzh is having attractive seaside gardens which are having rising trees with tall branches and is having the rhythmic sound of beetles in the form of song and fresh southerly breeze filled everywhere. Oh friends who are obedient towards me and are having bright face with beautiful lips which are ripened like a fruit! When will the day, I who am having sin, will see the enjoyable lotus like divine feet of the great benefactor  who is practising celibacy, having dwarflike and attractive form?

Ir ari Ay – being the enemy appropriate to be cut
nEr valiyOn Ana – having the strength to fight in direct combat
iraNiyanai – hiraNya kashyap’s
Un – body
Or ari Ay – unique form of narasimha (face of lion and body of human)
uraththinAl – through (your) strength
nI idandhadhu – you tore
varaththAl – through boons (granted by brahmA and other celestial entities)
vali ninaindhu – thinking of (his) huge strength
siraththAl – through his head
nin pAdham – your divine feet
vaNangAnAm enRE – was it because he did not worship? (no; it was because emperumAn could not tolerate the faults [committed by hiraNya kashyap] towards his follower prahlAdha)

varaththAl vali ninaindhu – iraNiyan (hiraNya kashyap) thought a great deal about the boons that he had obtained from various deities, who were given that power [to grant boons] by emperumAn. He had thought a mountain out of a mole hill. With the boons obtained, he thought that he was more powerful than emperumAn himself. Alternatively, he did not know that the deities who granted him the boons were under the control of emperumAn.

mAdhava – isn’t the consort of thirumagaL (SrI mahAlakshmi), the entity to be attained by everyone!

nin pAdham siraththAl vaNangAnAm enRE – Did you kill him because he did not bow down to your divine feet? You did not kill him because he considered you as an enemy. You killed him because he considered the child prahlAdha as his enemy and tortured him. Had you ever thought that he had committed fault against you? You only thought that he had not attained the benefit that he should have and that he did not regret his actions. It could also be considered that emperumAn did not want his property (the soul of iraNiyan) to go in the wrong path and end up suffering and hence killed him.

uraththinAl – you destroyed him through your strength. Though he had obtained so many boons, even iraNiyan had to retreat after seeing your strength .

Ir ariyAy nEr valiyOnAna iraNiyanai – he was the enemy apt to be torn asunder, strong enough to engage with you in direct combat. Earlier AzhwAr had spoken of the power of his boons (varaththAl vali ninaindhu). Here he is referring to the strength of his shoulders (nEr valiyOn).

Or ariyAy – as a unique lion. AzhwAr is saying that he is the incomparable narasingam (combination of lion and human being), anywhere in the world. Another explanation – he is the narasingam that his followers will always aim to attain, thinking of the activity that he had undertaken for the sake of his follower.  In other words, this indicates the way his followers, coming after the time of prahlAdha, will rid themselves of their fear, after meditating on emperumAn’s activity in protecting prahlAdha from his enemy. Or ariyAy – unlike the other lions which were created by brahmA, this was the incarnation that emperumAn took out, of his own volition.

nI idandhadhu Un – you tore his body. You carried out this activity to benefit iraNiyan so that iraNiyan’s soul will not suffer further as he had not worshipped you, an act that was apt for iraNiyan. Isn’t worshipping emperumAn the apt activity for the soul! Several pramANams (authentic sources) have been quoted in the vyAkyAnam to substantiate this point: (a) nammAzhwAr’s thiruvAimozhi 6-5-1 “thozhum ivaL” (she who worships) (b)” prahvAnjaliputasthitha:” (he stood  in humility with folded palms) (c) mahAbhAratham SAnthi parvam 344-45 “nama: ithyEdhi vAdhina:” (those who say  nama: (I am totally dependent on you)). (Physical) Body is formed in order to make the person suffer, just as it happened in the case of kaikEyi! Did you tear apart iraNiyan’s body because he did not worship you! No. (it was only because he caused hardship to prahlAdha).

We shall take up the 91st pAsuram next.