AzhwAr feels regretful that he has wasted lengthy period of time in other means and other deities and thus lost emperumAn.

pala pagalum – is it possible to specify this period? Isn’t it without a beginning!

pOyina enRu – is there any purpose in constructing a dam after the floods have receded? In the same way, AzhwAr says “what is the purpose in talking about something which has passed?”

anji azhudhEn – The time spent has been  without a beginning. The time to come now is without an end at all. AzhwAr cries for the time that he had spent in the past without any purpose, as he feels that that length of time is equivalent to the supreme time that he now spends experiencing emperumAn. AzhwAr says “anji azhudhEn” (cried out of fear). He could cry since he had wasted the time already passed. But why should he fear for the time that is going to come now? He fears for a reason which is going to appear in future. In other words, while his connection with emperumAn is permanent, it was he who had lost that connection in the past by not knowing about it. And, he is going to be there in future too! [He fears that he may again lose that connection]. Alternatively, instead of crying for the time that had passed, it could be taken that he fears that the future would also be like the past and he may spend it purposelessly and hence cries out of that fear. In SrI rAmAyaNam ayOdhyA kANdam 17-14 it is said “yaScha rAmam na paSchyEththu yancha rAmO na paSchayathi nindhithas sa vasEl lOkE svAthmApyEnam vigarhathE” (one who has not seen rAma or one who has not been seen by rAma will live in the world as a condemned person. His own mind will condemn him). People who do not see emperumAn even for a fleeting moment will suffer like this. When such is the case, is there any need to talk about his losing emperumAn since time immemorial?

aravu aNai mEl kaNdu thozhudhEn –  AzhwAr says that he saw emperumAn on thiruvananthAzhwAn (AdhiSEsha) like the gem carbuncle pressed on a silver plate. As a natural corollary of having his dharSan (seeing him) he worshipped him. aravaNai mEl – as mentioned in paryanka vidhyA he saw emperumAn atop AdhiSEsha. kaNdu – even if sees emperumAn through the vision of his mind, it appears to him as if he had seen emperumAn right in front of his eyes. In SrI rAmAyaNam, when sIthAppirAtti was in lankA and SrI rAma was on this side of the ocean, they were able to see each other through the vision of their minds, as if they were seeing each other in person. In the same way, AzhwAr too saw emperumAn who is in paramapadham (SrIvaikuNtam).

kadal Odham kAl alaippak kaN vaLarum sengaN adal Odha vaNNar adi – the waves in the ocean come and gently caress his divine feet such that he is able to close his eyes and rest awhile; his divine eyes reflect his greatness due to their reddish colour [people who are magnanimous and who are loving towards others will have reddish eyes, it is said]; it appears as if one ocean is straddling another; he has a form resembling the beautiful waves; the waves display the divine feet of emperumAn who is reclining on thiruppARkadal (milky ocean).  kAl alaippa – the tiny droplets of water in the ocean gently rub  on his divine thighs. sem kaN – eyes appear reddish out of his love.

We shall take up the 17th pAsuram next. 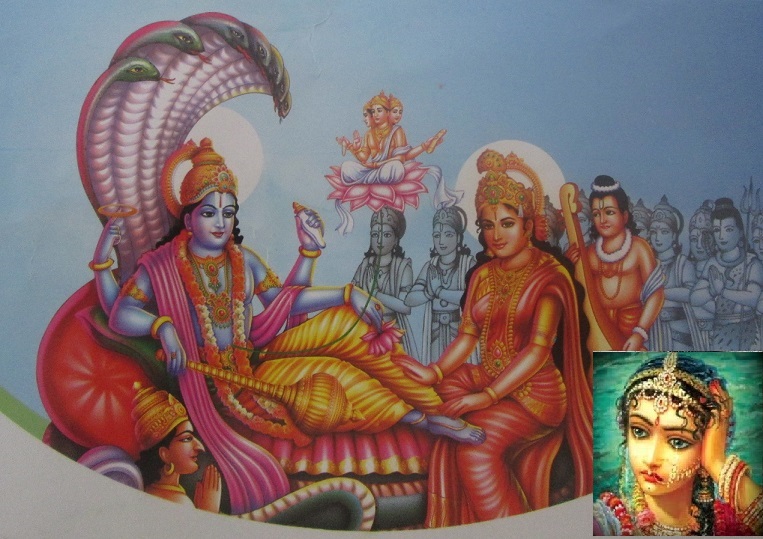 pirAtti (parAnguSa nAyaki), who was firmly situated in engaging in madal, became too distressed to engage in madal;

In the fourth decad – this pirAtti, not engaging in madal, due to her inability, the night set out, and she became grieved in separation, as everything fell asleep, and all her relatives too being unable to bear her suffering, were sleeping, having lost their control over themselves, thinking about

and repeating these again and again, being greatly distressed since emperumAn neither felt compassionate and blessed her nor he appeared and said “this is not apt” and condemned her; because of this she decided to finish herself but then realising emperumAn’s yOga nidhrA (meditation in milky ocean) where he resides thinking about the protection of the universe, and thinks “such emperumAn will not disregard seeing my distressed state” and survives.

In the fourth decad – previously, AzhwAr due to his great desire to enjoy bhagavAn , with great urge, set out to attain him even with his own efforts [engaging in madal], though the time is ripe for enjoying emperumAn, as he was not present, being greatly anguished, became incapable of doing anything and very grieved, being unable to handle the delay [in his arrival], highlights the following aspects which are reasons for his arrival and protection, [while he was] in such state:

Meditating upon these aspects, AzhwAr thinks “ISvara with such nature, is not coming to protect this AthmA (me) in this situation; what is the method to protect this AthmA [I] which is totally dependent on emperumAn that I cannot even kill myself?”; in this manner, AzhwAr explains his calling out, being unable to bear the delay, in the mood of a beloved woman (parAnguSa nAyaki) who is suffering in separation in the lengthy night time from his beloved man who is supreme lord himself.

Previously – it went along with great urge for parAnguSa nAyaki where she said “nAdum iraikkavE – yAmadalUrndhum“; but she lost all her strength [as time passed by] and engaging in madal became as difficult as attaining him; now, when one engages in madal, the picture of his/her beloved person should be drawn on the cloth; either emperumAn hid the sun as said in periyAzhwAr thirumozhi 4.1.8 “AzhikoNdu aniRiravi maRaippa” (hiding the sun with his sudharSana chakra, back then) or by divine arrangement, the sun set and the night arrived [making it difficult to draw] and it is not just the evening time but midnight when everything is fast asleep; as everyone irrespective of those who blame or those who give favourable advise to withdraw her from him, were sleeping and she was alone; at that time, she started meditating upon the qualities of purushOththama, who is the protector of all, and is of the nature of helping during total deluge; but such meditation during separation causes more anguish and she starts thinking to hang herself with the help of her own hair to kill herself and be saved [by giving up her life, she no longer needs to undergo the pain of separation].

[Is there anyone who tried to commit suicide like this in separation? sIthAp pirAtti’s example is highlighted from SrI rAmAyaNam sundhara kANdam 28.25] vishaysa dhAthA – Will we find any more generous person who will give this best material [here, poison is considered good because it will help end her life]? mE – Even if such generous person is there would he give it [and end my agony]? SasthrasyavA – Or is there any one who can give me a weapon that will finish me quickly unlike poison which may take some time to finish me? vEsmani rAkshasasya – In this town where rAvaNa kills me every day by keeping me separated from SrI rAma, is there anyone who will give me the tool for my mercy killing?

As parAnguSa nAyaki becomes desirous of killing herself, emperumAn reminds her “Since I am sarvarakshaka (protector of all), I have descended to thiruppARkadal (divine milky ocean) for the protection of all and have set to out to protect you, and you appear to be running out of patience”; she then thinks “as he is protector of all, he is destined to protect me, and it is I who am becoming impatient; should my protection naturally happen?” and having realised about his qualities, she sustains herself.