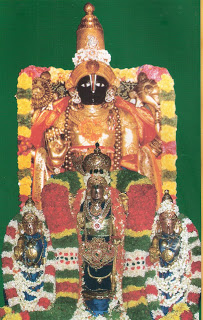 In tenth pAsuram – AzhwAr explains that kaivalya purushArtham (the goal of self-enjoyment) is very difficult to attain and an inapt goal [for the nature of jIvAthmA who is an eternal servitor of bhagavAn].

Subsequently, AzhwAr says “kaivalyam though is not temporary [as in the case of worldly pleasures which are temporary], since it is not as enriching as parama purushArtham (the ultimate goal of serving bhagavAn eternally), attaining of bhagavAn who is the all controlling supreme lord, is the most wonderful purushArtham (goal)”.

Tenth pAsuram. AzhwAr previously explained that both the earthly wealth and experience in heaven are temporary; when asked “unlike these, isn’t self-enjoyment a permanent goal?”, AzhwAr replies “While it is better in comparison to worldly pleasures [in the sense that kaivalyam is permanent while the worldly pleasures are temporary], since it is inferior when compared to the bliss of bhagavAn, kaivalyam is also very lowly; this being the case, try to hold on to bhagavAn”.

kuRuga – in proximity (of self instead of going astray in worldly pleasures)
uNarvaththodu – with the AthmA who is identified by his gyAnam (knowledge)
miga nOkki – meditating upon it intensely (to attain vision of self)
ellAm – all goals (other than AthmA)
vitta – the one who has given up
iRugal – exclusively ending on AthmA
iRappu – mOksha (liberation)
ennum – considering as the goal
gyAnikkum – for the gyAni (wise)
appayan – accepting (bhagavAn, who is the ultimate exclusive goal) as the means
illaiyEl – if not present
siRuga – lowly goals
ninaivadhu – to think about
Or pAsam – attachment
uNdAm – will exist;
pinnum – further
vIdu – mOksham (in the form of attaining self-enjoyment)
illai – will not be attained;