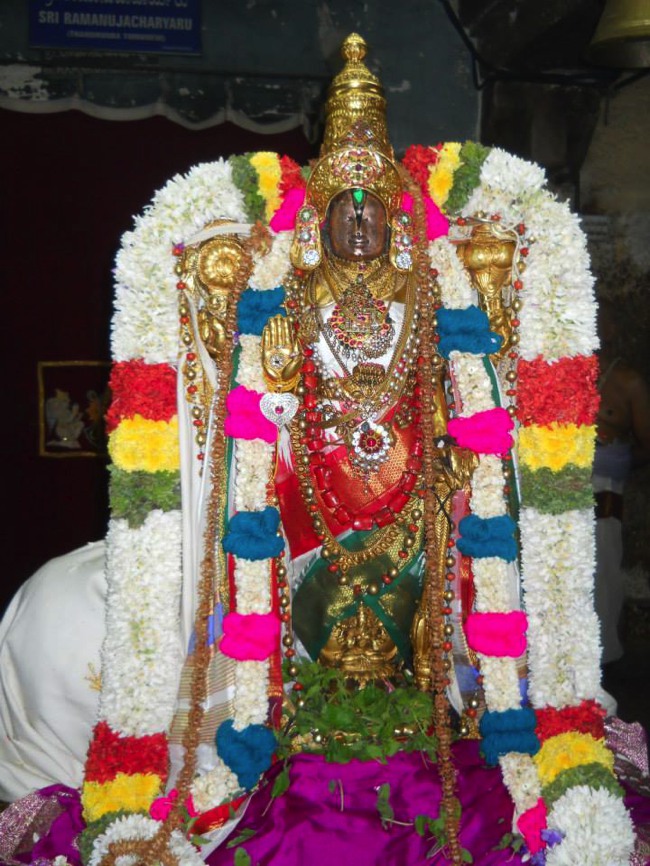 In third pAsuram – AzhwAr says “Those emperors who lived without caring for the other kings who surrendered to them, will lose their wealth and live without being respected by others”.

Those (emperors) who have at their feet the other kings themselves worshipping, will stay (with least bother for those who surrendered) hearing the thunderous noise of drums [being played] outside; such emperors would become worthless to become a piece of dust in a small portion of an object. Thus, meditate upon the divine feet of krishNa whos is adorning a crown which is decorated with fragrant thuLasi.

When the king bowed at the emperor’s feet, what did he do?

What would happen to such emperors? AzhwAr says “they will become a particle of dust eventually”.

emperumAn lives in the minds of chEthanas (sentient entities). Since the mind is the gateway through which our knowledge emerges, emperumAn knows all our faults. AzhwAr feels ashamed that he, being a liar, had caused blemish to the omniscient emperumAn by approaching him. What a terrible deed have I done, exclaims AzhwAr. “Instead of bringing blemish to emperumAn, I could have stayed with samsAris (dwellers of materialistic realm), who are ignorant of my faults” says the AzhwAr, “and it would be better even if I were to die, instead of causing harm to emperumAn”. Saying so, AzhwAr leaves the divine feet of emperumAn in which he had such a strong desire.

uLLaththE – inside the heart [mind]
uRaiyum – dwelling (constantly)
mAlai – emperumAn, who is omniscient
uLLuvAn uNarvu – the knowledge to meditate upon
onRu illA – without even a little bit
kaLLaththEn nAnum – I, the thief
thoNdu Ay – being subservient to you
thoNdukkE kOlam pUNdu – putting on an act of being subservient
uLLuvAr uLLiRRu ellAm – the thoughts of those who are thinking
udan irundhu – being together with
aRidhi enRu – (knowing) that you know
ennuLLE – within myself
nAn – I
veLgi – being ashamed
pOy – leaving (you)
vilavu aRa – such that the rib will break
siriththittEn – I laughed.

uLLaththE – emperumAn dwells in the heart which is the spring-board for thoughts. If he were to dwell outside, he would not know anything other than whatever the eye sees. The opinion here is that since he dwells inside, it is not possible to deceive him.

uRaiyum – dwelling in the heart constantly. If he were to go out for a little while, one can behave in whichever way one wanted. But since he dwells constantly in the heart,  even that is not possible, is the opinion here.

kaLLaththEn – I am such a thief that I put on an act to make other people not think that I do not have any knowledge. In an assembly of fools I will cheat them by saying “there is no fault in me known to myself” and in an assembly of learned people I will cheat them by saying “there is nothing good in me as known to my antharAthmA (the indwelling soul)” by putting on an act of being lowly. Thus, the learned people will think “he thinks so lowly of himself. Surely he will have very good knowledge about AthmA  as well as of paramAthmA”. Despite being the repository of all vices, I made everyone believe, in this way, that I did not have any vice. I indulged in all these acts of chicanery even while knowing that you [emperumAn] are there as a witness.

nAnum  thoNdAy – I, without having any of the good qualities, did not carry out the act of servitude that people, with knowledge of themselves, should do. Who should carry out the servitude of whom? SrI rAmAyaNam ayOdhyA kANdam 17.14 says “yaScha rAmam na paSyEththu yancha rAmO na paSyathi I nindhitha: sa vasEllOkE svAthmApyEnam vigarhathE II” (one who has not seen rAma, one who has not been seen by rAma, he lives, despised by the worldly people. His AthmA will also despise such a person). If a chaNdALa (one born in a very low caste) were to learn vEdhas, wouldn’t  the people of the world despise him? In the same way, AzhwAr despises himself, saying that he was trying to carry out kainkaryam which should be carried out by good people.

thoNdukkE kOlam pUNdu – not only did I carry out acts of deceit on you, I also made those who had very good qualities to bow down to me by indulging in falsified acts and earning good name. I wear the 12 Urdhva puNdrams [the marks worn by SrIvaishNavas on their bodies to indicate their subservience to emperumAn]; I don the five divine weapons on my body; I recite your divine names such as “achyudhA amararERE Ayar tham kozhundhE” (pAsuram 2) from the lips instead of with full, deep belief; I sing about your sweetness by saying “ichchuvai thavaira achchuvai peRinum vENdEn” (pAsuram 2); I claim that I placed my feet on the head of yamadharmarAja and his clan by singing “nAvalittu uzhi tharuginROm naman thamar thalaigaL mIdhE” and bewilder people; I counsel others thinking of myself as a learned man. How much have I done like this? How much have I babbled like this?

uLLuvAr uLLiRRellAm udan irundhu aRidhi enRu – I understood that he [emperumAn] knows every thought that one thinks of, as he dwells constantly inside the heart which is the source for thoughts to emerge. It is pertinent here to think of the words spoken by SakunthalA to dhushyantha. SakunthalA vAkhyam (bhAratham 38.29) says “EkO’hamasmIthi cha manyasE thvam na hruchchayam vEthsi munim purANam I yO vEdhithA karmaNa: pApakasya thyAnthikE thvam vrujinam karOshi II” ([Oh dhushyantha maharAja !] you think “only I am there”. You do not realise that bhagavAn, the Adhipurusha [the first entity] is dwelling constantly in the heart . You are carrying out sinful deeds at the proximity of one who knows of such sinful deeds). AzhwAr suggests here that he was indulging in improper deeds even when emperumAn, who is omniscient and who controls everything, dwells in his heart.

veLgip pOy – AzhwAr feels ahamed after realising his deceitful nature, emperumAn’s omniscience and his dwelling constantly in his heart. pOy – Once he felt ashamed, he could not stand in the presence of emperumAn, with bowed head, and leaves his presence. If one were ashamed of something, he would leave from that place and go to a place where it is not present. Without the thought that there is not a place where emperumAn is not present, AzhwAr searches for such a place.

ennuLLE nAn – samsAris cannot join hands with him for laughing off his act of foolishness, as they are totally ignorant. emperumAn also will not join him in his laughter as AzhwAr wanted to leave the presence of emperumAn. Hence AzhwAr has to laugh all by himself. Since there was none to join him in this act of laughing and since he realised his foolishness, he himself became his supporter for laughing.

vilavaRach chiriththittEnE – He laughed so much that his ribs broke, says AzhwAr. Since the deed that he carried out [of finding a place which did not have emperumAn’s presence] was in the forefront of all foolish acts, there was no limit to his laughter too. His act of trying to leave emperumAn’s presence is like a person who, wishing to commit suicide by jumping into fire, eats betel leaves and decorates himself with flowers before he jumps and he laughs at that. When arjuna heard the other paths to attain bhagavAn, before krishNa spoke to him about charama SlOkam, arjuna felt disheartened because the other paths were so very difficult to practice. He waited with the hope that krishNa would offer a solution to this. AzhwAr, since he thought that he should not approach emperumAn any more, decides to leave him without any desire. He tries to leave the presence of emperumAn, laughing to himself, just as a person, deciding to jump into fire, takes betel leaves and decorates himself with flowers.

We shall move on to the 35th pAsuram.