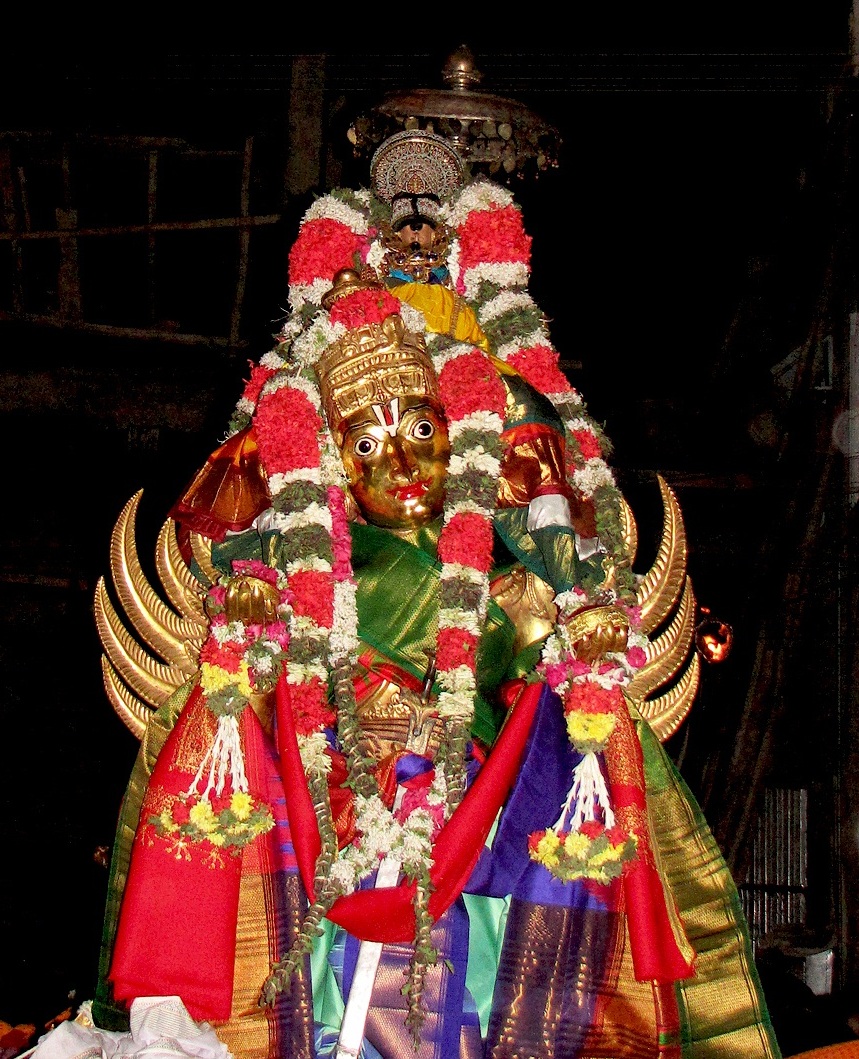 In the first three pAsurams (hymns), AzhwAr spoke about the good fortune that he had in reciting emperumAn’s divine names. In the next eleven pAsurams he spoke to the samsAris and counselled them to extol the divine names of emperumAn. Since they did not pay heed, he stepped back a little in the previous pAsuram. From this pAsuram [15th] until the 24th pAsuram, for 10 pAsurams, he speaks about how he benefitted from the causeless mercy of emperumAn. From being one among samsAris, emperumAn made him to counsel the other samsAris, in the bargain removing his doubts at the beginning and showering him with paramabhakthi (final stage in devotion in which the jIvAthmA cannot sustain himself even for a moment if separated from emperumAn) at the end. All these were done by emperumAn himself, says the AzhwAr. nammAzhwAr, in his thiruvAimozhi 2.7.8 says “ennaith thImanam keduththAy unakku en seygEn’ – you diverted me from vices; can I ever repay you? In this pAsuram AzhwAr says that once we remove the feeling of hatred towards emperumAn, he shows all his greatness and that once a person realises that emperumAn is there, he removes all the doubts from that person’s mind. He affirms in his case that once he got rid of his hatred towards emperumAn, he showed his greatness which the AzhwAr enjoyed.

Let us look at the pAsuram.

meyyarkkE meyyanAgum – the “mey” (truth) that is referred to here is the adhvEsham (non-hatred) without any admixture which lies on the part of chEthanan (sentient entity). For a very long time, the chEthanan had been living life only for himself. Since it had not yielded lasting benefit, it is called as false. Avoiding that life (of living for himself), to live for emperumAn from now onwards is termed as “mey” (truth). If it is only the non-hatred feeling that is now with the chEthanan, how is paramachEthanan (emperumAn) disposed towards him? meyyanAgum – he behaves towards the chEthanan who has only non-hatred feeling towards him, in the same way that he behaves with his mind, body and speech towards the great AthmAs who live their lives totally for him; i.e. he displays his svarUpam (basic nature), rUpam (physical form) and vibhUthi (wealth) to the chEthanan. The same word “mey” has been used with two totally varied meanings in the two words seen above – in the first, it means showing non-hatred towards emperumAn and in the second, it means emperumAn behaving with equanimity with his mind, body and speech. How can this fit, asks the vyAkhyAthA and responds to the query himself saying that this particular section [the 3rd section as we have seen in the avathArikai] deals with emperumAn’s qualities and hence it is apt to consider that with his mind, body and speech, he is truthful. emperumAn is full of auspicious qualities and hence the meaning of non-hatred cannot be taken as a quality for him when defining the second “mey” Since emperumAn and chEthanan are strongly bound by the “father-son” relationship, emperumAn has  to protect the chEthanan considering his non-hatred feeling towards him as a quality. Since emperumAn is avAthpthasamasthakAman (with no desire unfulfilled) there is no need for emperumAn to expect more than this from chEthanan. For someone who has been all through living his life only for himself, to show non-hatred towards emperumAn to get out of this vortex is acceptable. It is not easy for the chEthanan to suddenly change himself and live only for emperumAn. To protect the chEthanan based on this adhvEsham alone is a glorious aspect for emperumAn and not  a shortcoming. For these reasons we take different meanings for the two versions of “mey”. Moreover, only nithyasUris can display unadulterated truthfulness to emperumAn and it is not possible for samsAris to display this quality and samsAris can attain mOksham (SrIvaikuNtam) with whatever quality they have. In SrI rAmAyaNa yudhdha kANdam, SrI rAma tells his army chieftains on vibhIshaNa’s surrender “mithrabhAvEna samprAptham na thyajEyam kathanchana I dhOshO yathyapi thasya syAth sathAm Ethadhagarhitham II” – I shall never let down this vibhIshaNa who has approached us in the mask of a friend; even if he has any dhOsham (fault), let it be; good people will not treat him with irreverance. Thus we have to take only the meaning that emperumAn displays truthfulness to the samsAri with his mind, body and speech in harmony. The non-hatred quality displayed by the samsAri, leaving aside his goal of living only for himself all along, cannot be a path for mOksham. It is only for the knowledgeable that it will be part of their svarUpam (basic nature) to live life only for emperumAn. This desire will be there during the time of enjoying emperumAn in SrIvaikuNtam too. Hence it will not be a path to mOksham.

Where have we seen that emperumAn is true to those who do not show hatred towards him and punishes those who are unfaithful to him? …………

ennaippOla – like me. AzhwAr quotes himself as the example for the above. AzhwAr says “for a long time I was indifferent towards him and he did not come anywhere near me. From the day that I showed no hatred towards him, he fell head over heels on me and took me under his wings”

vidhiyilA ennaippOla – unfortunate like me. When he is so simple, I was engaging myself in worldly pursuits, forgetting about him. AzhwAr feels sorry that he had lost emperumAn’s grace all along and hates himself. poygai AzhwAr, in the first thiruvandhAdhi 16 says “pazhudhE pala pagalum pOyina enRu anji azhudhEn…” – I cried bitterly for all that I had lost all along by not engaging with emperumAn. In SrI rAmAyaNam ayOdhyA kANdam 17.14, vAlmIki says “yaScha rAmam na paSyEththu yaScha rAmO na paSyathi I nidhitha: sa vasEllOkE svAthmApyEnam vigarhathE II” – the one who has not seen rAma or the one who has not been seen by rAma, such a person lives in the world reproached even by his AthmA.

Is it that emperumAn doesn’t have anyone else whom he can take under his wings other than this chEthanan who puts on an act of not showing hatred towards him? ……

putkodi udiya kOman – the Lord who has garuda as his flag. Mentioning garuda is equivalent to mentioning all the nithyasUris. ALavandhAr, in  his sthOthra rathnam 41 says “dhAsas sakhA vAhanam Asanam dhvaja: yasthE vidhAnam  vyajanam thrayImaya: I upasthitham thEna purO garuthmathA thvadhanghrisammardha kiNangasOyinA II” – the garudAzhwAn who is having vEdhas as his body is your servitor, friend, vehicle, throne, flag, roof, flag. He has as his identification the scar formed by your divine feet constantly touching his body, due to which he gains brilliance. In his presence, I have worshipped you, says ALavandhAr. This garudan is taken as an example by AzhwAr for referring to all nithyasUris who are there for emperumAn. What surprises AzhwAr is that such an emperumAn, who has nithyasUris , each of whom is capable of carrying out service which can be done only by many of his true servitors, has taken him [AzhwAr] under his wings, based on his non-hatred quality. vyAkhyAthA quotes another nithyasUri’s servitorship from sthOthrathnam 40 “nivAsa SayyAsana pAdhukAmSukOpadhAna varshAdhapavAraNadhibhi:I SarIrabhEdhais thava SEshathAm gathair yathOchitham SEsha ithIrithE janai: II” – AdhiSEshan serves emperumAn as his divine palace, mattress, throne, sandals, divine dress, divine cushion, umbrella and so many other services; serving him at various points of time in various forms, appropriately. Thus each of emperumAn’s nithyasUris is capable of serving him in varied ways which are difficult to match even by an assembly of servitors. kOmAn – nammAzhwAr says in thiruvAimozhi 1.1.1 “ayarvaRum amarargaL athipathi” – he is the Lord of tireless nithyasUris. Why is such a great person, who has an army of servitors, longing for a samsAri to take him under his wings? Just as even a crorepathi would still look for a coin that had fallen from his hand because that is his, emperumAn also looks for every samsAri, since every samsAri is his property.

uyyappOm uNarvinArgatku – for all those who have been living a falsified life and have extricated themselves from that life  and thinking what is the way to redeem themselves. For those who do not have this feeling it means an end to their lives. bhagavath gIthA 2.63 says “smruthi bhramsAth budhdhi nASO budhdhi nASAth praNaSyathi” – intelligence gets ruined because his memory fades. Since intelligence is ruined, he gets immersed further in samsAram and gets ruined. Thus krishNa also shows what happens when the samsAri  gets the feeling of things getting ruined. What is the feeling of uyyappOm uNarvu? It is a feeling  when, by accident, one does  a puNya (virtuous deed) due to which he realises the position that he was in, thinks about his svarUpam (basic nature) and  finds out how he can get out of this position and get to a stage where he can redeem himself.

aiyappAdu aRuththuththOnRum – only when the samsAri does not accept the entity of sarvESwaran,  he has the doubt. Once he accepts sarvESwaran’s existence, ISwaran himself tells him “I am the object to be attained; I remove your hurdles and enemies” and removes his doubts. How does he remove these doubts? ……

azhagan – arjuna tells krishNa (bhagavath gIthA 2.7) “kArppaNya dhOshOpahathasvbhAva: pruchchAmi thvA dharmasammUda chEthA: I yachchrEya: syAnniSchithambrUhi thanmE Sishyas thE’ham SAdhi mAm thvAm prapannam II” – not knowing what is to be done, confused on seeing different types of dharmams (virtuous ways), I ask you; whatever you decide as to what is good and what is bad for me, please tell me that. I am your disciple. Direct me, who has surrendered to you, correctly. krishNa removed the doubt of arjuna through discourse. For those who do not have such knowledge, he removes their doubts through his physical beauty. nammAzhwAr in his thriuvAimozhi 9.7.3 says “sengamalaththalar pOlum kaN kai kAl senganivAi angamalaththilai pOlum thirumEniadigaLukkE” [his divine eyes, divine arms, divine legs and divine mouth are like just blossomed reddish lotus; and the divine feet are like the leaves of the beautiful lotus] In thiruvAimozhi 4.5.10, he says “kaNdavRRAl thanadhE ulagena ninRAn” [by looking at the way he is standing, it is evident that the entire world is his i.e. it is under his control]. His beauty is such that, that he is paramporuL (highest entity) will be known to everyone who looks at him.

A doubt arises that this beauty can be enjoyed only at paramapadham. AzhwAr responds saying

Ur arangamanrE – There is  no need to go to paramapadham to enjoy his beauty. This can be enjoyed in this samsAram, in thiruvarangam itself, he says. If paramapadham is his court hall, fit for an emperor, once the court sitting is over, the palace where he takes rest is thiruvarangam. This is why he rests permanently in SrIrangam.

We shall move on to the 16th pAsuram.