In the previous pAsuram, the worldly people who did not reform even after emperumAn had incarnated here, had done so after emperumAnAr’s incarnation; they reformed and became distinguished servants of emperumAn – said amudhanAr. In this pAsuram – my AthmA was deteriorating due to tightly bound love towards the breasts of young women of decorations from feet to head; emperumAnAr who is without any blemishes, who is having the greatness of knowledge by which he can advice us that the husband of pirAtti that is thiruvarangach chelvanAr (emperumAn at SrIrangam) is the true lord available for all the AthmAs, and so emperumAnAr had shown his kindness to the worldly people (talked about in the previous pAsuram), has now poured such limitless kindness towards me, and pulled me out of the mud that had covered me, that is, from my attraction towards worldly matters. Oh do you see that greatness! – enjoys amudhanAr and places his head on the divine feet of emperumAnAr.

Ay – exclusively selected; Using flowers, ornaments, they hide the blemishes of their body from being visible, and make us infatuated, and so they choose the ones (ornaments, etc.) that are suitable for their form;
izhaiyAr – having such ornaments, and wearing of which is their identity – such women’s –
kongai thangum – staying only in their breasts and not in any other parts,
ak – (that) – the (love) that cannot be explained in words, that lowly love;
azhundhi – (I had) set deep
kAdhal aLaRu – in the mud slush that is the love towards them,
en Aviyai – and so my AthmA
mAyum – was deteriorating (that is, loss of being according to the true nature);
like how the virtuous ones who know how to pull out the one stuck in mud immersing to death, (emperumAnAr did that to me by saying -)
mAmalarAL nAyakan – thAyAr’s husband
arangan – that is, periya perumAL is the only
nAthan – lord
ella uyuirgatkum – for all the AthmAs –
ennum –  so advises
irAmAnusan – emperumAnAr,
thUyavan – who is having purity of knowledge, and when advising in this way,
theedhu il – not having blemishes like doing it for money, fame, etc.,
thol aruL – his natural kindness
surandhu – kindled,
vandhu – he came as pushed by that kindness
inRu eduththAn – and now saved me.
‘Oh how great that is!’ is the meaning.

ak kAdhal – is also to mention that it is to be avoidable.

Ay izhaiyAr – As said in ‘charmA srag mAmsamEmE dhOsthi majjA chuklAdhi samyuthE | dhEhE  chEth preethimAn mUdO’, (body is of components of skin, meat, bones, etc., (so something that is in the form of combination of other things is bound to deteriorate) – those who are having love towards such body is the fool/ignorant), and, ‘krimi janthu sangulam’ (it includes germs, etc.,), and ‘svabhAva  dhurgandham asoucham adhruvam kaLEbaram mUthra pureesha bajanam’ (smells bad by nature, impure, this body is the holder of urine, etc.), and ‘mudaithaliyUn [rAmAnusa nURRanthAdhi – 96]’ (having meat of bad smell) – such is the body which is to be avoided, and they hide such nature of the body by decorating themselves with clothes, jewels, sandal paste etc., and look beautiful from feet to head – such young women’s –

Like those who join the palms with outward respect (and say nama: etc.,) while appearing to be not having any defects,  they are having such decorations on themselves;  { Translator’s note: Contrast this with the gOpikAs who wear ornaments in thiruppAvai – 27 }

kongai thangum – As said in ‘sthanau mAmsa grandhee’ (two breasts that are swell nodes of meat),  being attracted to such breasts of meat, not understanding its blemishes, but thinking of them as enjoyable, and having no ability to look at anything else (even in that body), like one having strong thirst for water would always stay around near a water-shed, he is living in them permanently;

ak kAdhal alaRRazhundhi – like them the love also which is very lowly which is like a deep mud in which he is immersing; or, such love which is beyond words (not understandable);

en Aviyai – ‘Earlier you had talked about emperumAnAr lifting up the worldly people, but how did you know about that? In case you had heard about it in private learning, would we have to believe that?’  No, I did not hear about this based on preaching – I am the eye witness of it, saying that he points to himself, saying ‘en Aviyai’ here, that is, my AthmA.  My AthmA which was like a non-existent one (which he made to be like existent based on his kindness); My AthmA which does not have any means (for getting such grace).

mAmalarAL nAyakan – Since nArAyaNan is bound to be common to both bondage and liberation, and bound to punish if people do not follow the instructions, He might be accused of ‘vaishamya nairgruNyE na sApEkshathvAth [brahma sUthram – prayOjanathvAth adhikaraNam – chapter 2] (brahmam does not have partiality or cruelty (because the happy and sad parts of lives of jIvAthmAs are due to their deeds)’, and ‘krutha prayathnA apEkshasthu vihitha prathishidhdhA vai yathArdhdhibhya:  [brahma sUthram – parAyaththa adhikaraNam – chapter 2]’ (~ SAsthram has asked him to do certain things and not do certain things – if one says that only emperumAn instigates people to do or not do things, then instructions of do’s and don’ts of SAsthram would be pointless; so it is with their own efforts that people do and not do certain things and so they do not follow / oppose the instructions of vEdhas, and thus accumulate karmas),

and so He sees the deeds and misdeeds of people and will hand them its effects accordingly – is how one would have to be afraid of if nArAyaNan were a bachelor.

Since He is not a bachelor, as said in ‘saha dharmachareem saurEssammandhritha jagaththithAm | anugrahamayeevandhE nithyamagyAtha nigrahAm’ (sowri rajan’s wife who is focused on the good for all the people, bow to Her who does not know punishing), thAyAr is such, and she always graces us, reminds emperumAn about the goodness of the world that He is, and attracts Him by rolling her eyes, etc., related to playing her eye brows on Him, and makes Him listen to her wishes, and she too stays with Him without ever leaving as said in ‘iRaiyum – agalakillEn [thiruvAimozhi – 6.10.10]’ (would never leave you) – husband of such pirAtti; Isn’t She the one who said ‘na kaschinnAparAdhyathi‘ (there is no one who does not commit mistakes – SrI rAmAyaNam yudhdha kANdam 116.45) (when in the group of rAkshashIs in lankA));

(So this is about the husband of such thAyAr, so we can be sure of His kindness towards us); 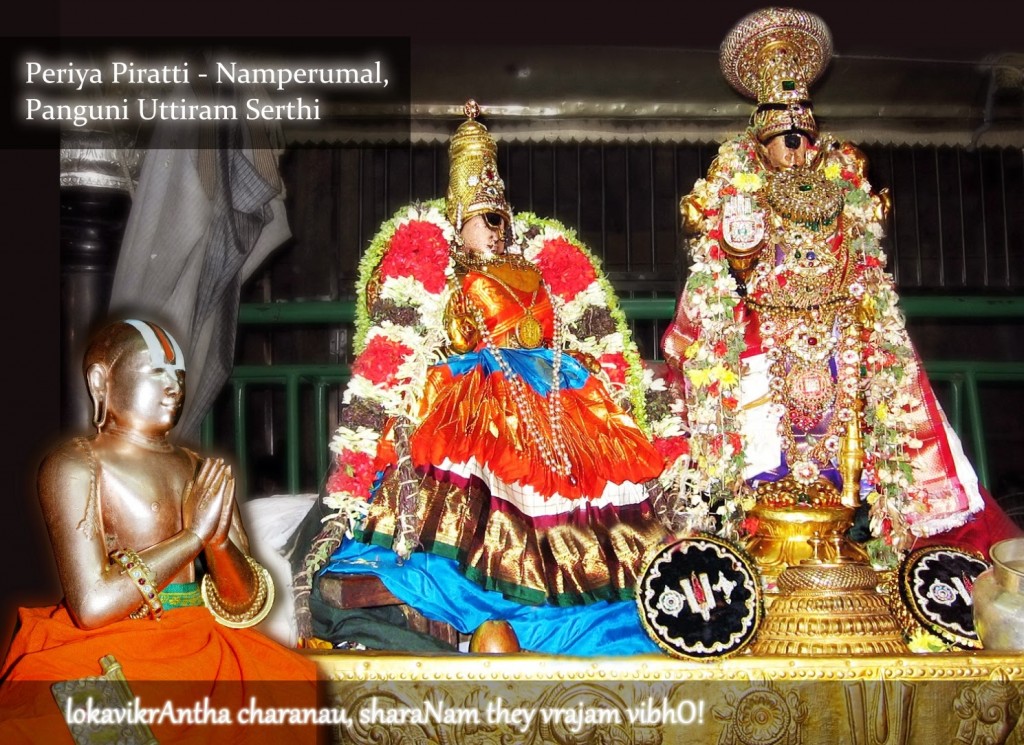 ellA uyirgatkum nAthan –  As said in ‘pathim viSvasya’, he is the protector of all the AthmAs. He is the lord of all the AthmAs; but, do  not think that He is not reachable for us because of what is said in ‘vidhi Siva sanakAdhyai: dhyAthum athyantha dhUram’ (SrIman nArAyaNan is) beyond limits of knowing for  brahmA, Siva, and his set of offspring) –

arangan – He has come searching for us to our place and having His temple here (in SrIrangam);

Yes, He said ‘abhayam sarva bhUthEbhyO dhadhAmi’ (will protect everyone);

thUyavan – As said in ‘nahi gyAnEna sadhruSam mavithramiha vidhyathE’, due to his knowing the truth of philosophy up to its most inner meanings, he (emperumAnAr) makes those like me who is lowly to become pure.

‘(You said emperumAnAr took you up), but you were not going after him for this, but were only after material things/women!’ ,

inRu – that too, did his grace come after a long time? inRu – vandhu – came now for all the people to see;

thol aruL surandhu – may be he showed his kindness to you at one point in time, is it there for him at all times? thol  – that kindness is his innate nature;  arul surandhu – such kindness flowing out, and growing such that all my bad traces are destroyed;  as said in ‘thripAvanArENu nivAraNOthakam’, he showered his kindness like the cloud showering the rain;

eduththAn – Like how virtuous ones who have the knowledge would save someone dragged by the floods, like how a mother who would jump into the well in which her child has fallen and remove the danger, he came with such a great care and uplifted me.

mAyum Avi – emperumAnAr came near the time of (svarUpam) getting fully destroyed and saved me;   vandhu eduththAn – Shows the inability to do something by own efforts;  it might be that if he had come even a little bit earlier he (amudhanAr) would have not accepted his kindness – even though emperumAnAr had the kindness by nature for ever, this may be the reason for him to not come till now (answer to the question in pAsuram – 38).

Like how a virtuous person who knows the matter would jump and save someone getting taken away by the floods, emperumAnAr came and saved me from immersing into the mud;

emperumAnAr saved me by extending his long hand that is upadhESam.

What did emperumAnAr advise? First he advised to those who are after beauty, that we should see who the most beautiful thAyAr is after – She is after emperumAn – so that is where our focus also needs to be.

But since He is Her husband, She is enjoying Him. What is there for us?

ellA uyirgatkum nAthan – He is the lord for everyone. So you also have the same level of rights for enjoying Him;  shows prApthi  (availability of Him for us);

How do we enjoy Him without seeing him?

arangan –  He is there for us to see; this shows his saulabhyam (simple to reach);