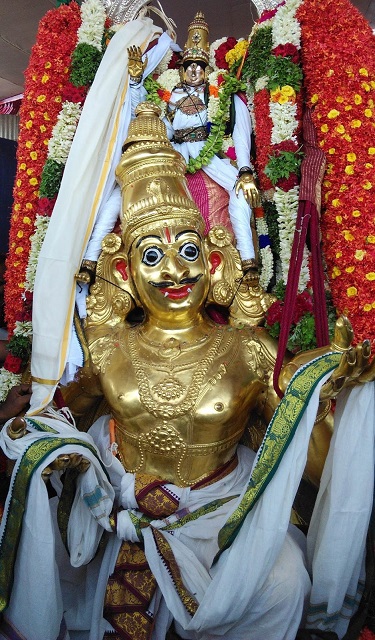 Subsequently, since AzhwAr cannot sustain himself without praising emperumAn, he highlights emperumAn’s qualities and praises him.

In ninth pAsuram – AzhwAr explains emperumAn‘s vAthsalyam (motherly affection) towards his devotees, with an example.

Subsequently, your supremacy of protecting your devotees just with your will is inferior when compared to the great motherly affection you have towards your devotees.

In ninth pAsuram – AzhwAr mercifully explains emperumAn‘s motherly affection that easily wins over his supremacy [that was explained in previous pAsurams].

Ninth pAsuram. AzhwAr says “If we say that your supremacy cannot be explained, does it mean that your simplicity is within the boundary of words?”.

(one who urgently arrived at the banks of the pond to protect his devotee)
un – your
sudar – greatly radiant
sOdhi – lustre
maRaiyAdhE – will it not be reduced?

You appeared in front of the elephant (gajEndhrAzhwAn) that is having attachment due to rendering services, to protect it by riding the garudAzhwAr with great urgency, having the beautiful sudharSana chakra (disc) which has sharpness and does not become blunt and has a sharp mouth, in your right hand. In such case, for those who worship you in this blossomed/expanded world, if you helped them with unfailing gyAnam (knowledge) in the form of sankalpam (divine will) as your entourage, would that not reduce your greatly radiant lustre (of urgently arriving at the banks of the pond to protect his devotee)?