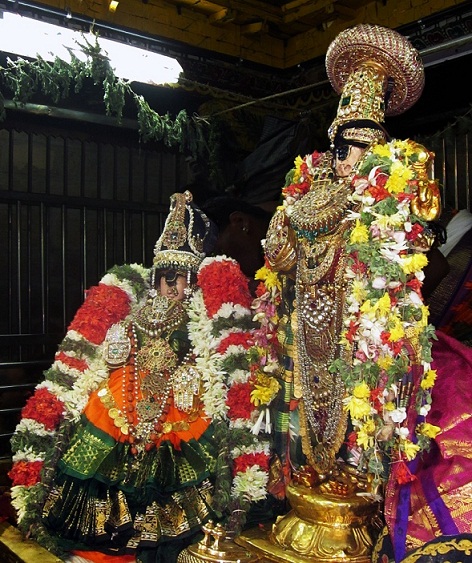 (mAdhavan) AzhwAr wonders to himself “What is the aspect in me which caused emperumAn to transform me to become a vaishNava and pursue those who are related with me too?” and explains that in this pAsuram.

In the third pAsuram – AzhwAr says “emperumAn eliminated all my defects and accepted me just for saying the name mAdhava”.

Subsequently, AzhwAr mercifully explains the favours done by emperumAn being partial towards him merely for his (AzhwAr’s) word [of saying mAdhava].

Third pAsuram. Previously AzhwAr said “mA sadhir idhu peRRu” (acquired this great glory); when asked the reason for this, AzhwAr says “unknowingly I had spoken the words the residents of antha:puram (private quarters of the queens)”. bhattar said in SrI guNarathna kOSam 52 “… jAmAthA dhayithasthavEthi bhavathIsambandhadhrushtyA harim paSyEma …” (Oh mother lakshmi! Like the residents of mithilA who loved SrI rAma due to your relationship with him, in the same manner, we who are engaged in your beautiful service too, approach sarvESvaran (lord of all) namperumAL who is called as jAmAthA (azhagiya maNavALan) and who is your lord, look at him, serve him etc. On seeing his joy during those times, we too would feel blissful [This SlOkam is quoted to establish that the residents of antha:puram (those who serve thAyAr) would glorify perumAL].

for that,
en uL – in my heart
pugundhu – entered
irundhu – stayed there without any other thought
thIdhu – vices (which were committed knowingly)
avam – (incidental) vices
kedukkum – destroying
amudham – eternally sweet

emperumAn who appeared as krishNa for me, who is my lord, considered my uttering (which was uttered without heart’s intent) of “SrImAn” (mAdhava – the lord of SrI mahAlakshmi) alone as the reason and saved me from being approached by defects such as avidhyA (ignorance) after uttering that word; vowing this, he entered into my heart, stayed there without any other thought, being eternally sweet, eliminated all my defects (which were committed knowingly or unknowingly); due to this union, he allowed me to experience his divine reddish lotus-like eyes and well-established divine form like a block of sugar without having any defects (that arise due to mixing with other objects or being cooked).

For bhagavAn, there is no kOdhu (i.e., looking for some effort to do a favour) and avam (doing a favour with selfish motive).

What did he do after entering?

Would he give a bitter medicine to eliminate these?