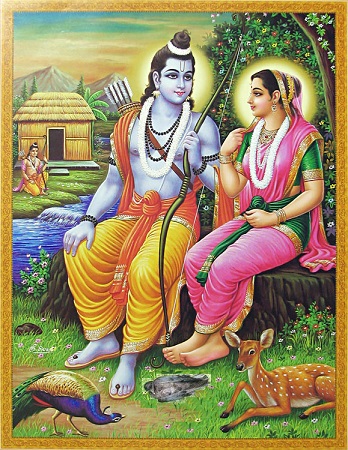 Both chUrNai 8 and 9 are short ones. Hence we shall see them together in this. First, chUrNai 8:

bhagavAn asks of bhagavadh SrI rAmanuja after hearing chUrNai 7, “am I father, mother, relative etc to you alone?”, to which SrI rAmanuja says “you are all these things, to all the entities in the entire universe” in this chUrNai. Now, let us look at the chUrNai:

thvamasya pUjyasya – thvam – you; asya – this; pUjya – venerable. you are highly venerable to all the entities. All these entities look up to you for everything.

gurUr gariyAn – guru – teacher (AchAryan); gariyAn – very rare to find (exalted). In the earlier verse the word pUjya was related to bhagavAn being regarded as the biological father; here (in this  verse), gariyAn is related to his quality of bestowing knowledge (gyAnam) and hence defines the boundary for venerability.

There is none who is equal to you. How can there be anyone who is superior to you? He stands head and shoulders above everything or everyone else, says SrI rAmAnuja.

lOkathrayEpi aprathima prabhAva – lOkathraya – among the three different types of people – badhdhAthmA (samsAris like ourselves, living in this materialistic realm), mukthAthmA (those who have got liberated from samsAram and have attained SrIvaikuNtam) and nithyAthmA (people who were never associated with materialistic realm and were always in nithya vibhUthi – SrIvaikuNtam); aprathima – unmatched or incomparable; prabhAva – impact or impression.

You have unmatched impact or impression over the three different types of AthmAs in all the worlds. You are absolutely great!

Let us now move over to chUrNai 9:

SrI rAmAnuja is apologising for carrying out SaraNAgathi (act of surrendering). But what crime did he commit that he should apologise now? He feels that he had been going around doing many acts that are not prescribed in SAsthras (religious treatise), just as a married woman leaves her husband, goes out with several others for a long time and returns to her husband, asking him to give her shelter and protection, going to the extent of saying that he is duty bound to protect her despite her crimes. Such an act of a woman would be considered as the extreme limit of crime; SrI rAmAnuja feels that he too has come to bhagavAn after several births, going to various other dhEvathAs (demi-gods) and indulging in activities not accepted by SAsthram. But why surrender in the first place? It is not possible not to carry out SaraNAgathi either, because at some point of time or the other, just as kAkAsura did in SrI rAmAyaNa, one has to surrender to bhagavAn. Thus, having surrendered, he realises all the mistakes of the past and apologises for the same.

thasmAth – hence; Here, bhagavAn is considered as all the close relatives of the AthmA (mother, father, relatives, teacher etc as seen in chUrNai 7 and 8). A husband or wife will forgive some transgressions. A father will forgive some, so will a mother or brother or such other relatives. Since bhagavAN is all these relatives put together in one form,  SrI rAmAnuja asks for forgiveness for all transgressions that he has committed all along.

praNidhAya kAyam – paying obeisance physically; since he has offered obeisance both mentally and physically it is tantamount to offering it verbally too, thus offering it through all three karaNams (media) as mentioned in SAsthras (manO vAk kAyam – mind, speech and body).

prasAdhayE – to offer; who is to be offered here and to whom?

aham – I (reference is to SrI rAmAnuja himself), who, instead of worshipping and praising you (here the reference is to bhagavAn), has been indifferent to you all these days and indulging in various crimes. bhagavAn wonders why he should forgive him of such indifference and crime? bhagavadh rAmAnuja offers the reasoning mentioned below, for this.

pithEva puthrasya – pithA– father; Eva – only; puthra – son; asya – this. Just as only a father will forgive the transgressions of his son,

sakhEva sakhyu: – sakha – friend. Just as only a friend will forgive the transgressions of a friend,

priya: priyAyA: – priya – beloved. Just as a girl (or boy) would forgive the transgressions of her (or his) beloved,

dhEva arhasi – dhEva – you; arhasi – qualified or fit. SrI rAmAnuja says that bhagavAn, being related to him in every way, is fully apt to forgive him.

With this, SrI rAmAnuja completes quoting from purANas and SAsthras. Next he lists out what all wrong deeds he has committed. We shall see these in the 10th chUrNai.