Now, he (maNavALa mAmunigaL) is divining the reason for the chief among the aforementioned ones, that is, nampiLLai, getting an even more distinguished name, as lOkAchAryar – with this pAsuram of ‘thunnu pugazh’, etc.

He (kandhAdai thOzhappar) is – the one having the greatness of great family heritage, education, moral conduct, having the name as pachchai vAraNap perumAL, being a divine grandson of mudhaliyANdAn, and being a divine son of kandhAdai ANdaN, isn’t he? It is talking about what such a person did, as ‘tham ugappAl’.

That is, seeing nampiLLai’s greatness of knowledge and wealth of disciples, he could not tolerate, and got jealous, and in the presence of perumAL insulted him, and, as he returned to his home, his divine wife who is of goodness, heard about this, and said a few words of regret, and hearing those words of her, he got his jealousy cleared as said in ‘pramAdhAth budhdhithOvApi yadhaka: kriyathE sadhA anuthaprasthu thAnEva kshamayEnnAnyathA sama:’ (~due to inattentiveness or knowingly what mistake is committed, always be repenting and asking for bearing /forgiving it; it cannot be any other way),

with great regret, to find the lost item in the actual place, was starting to go there with additional support,

at that time, as said in ‘ahEthOrapi sakrOdha marchchayan achyuthapriyam prabOdhya vividhairyathnai: praSAdhayEth’ (~ When one who does archanai and is dear to achyuthan gets angry without any reason, a knowledgeable one should try to get his mercy and satisfy him [is this the correct interpretation??]),

(thOzhappar decided) to please him, had come to the entrance of his divine house (thirumALigai), and was being there in the pial (thiNNai / front patio), saw such nampiLLai, and saw and heard his very submissive words and actions, and with love wondered what a way this exchange was, and due to excess of love, looked at him and said ‘All these days you were an AchAryan for a few people; now you have become fit for being an AchAryan for the whole world’, ‘enna ulagAriyar(n)O enRu uraikka’ – what, are you the lOkAchAryan, saying so he divined this name. 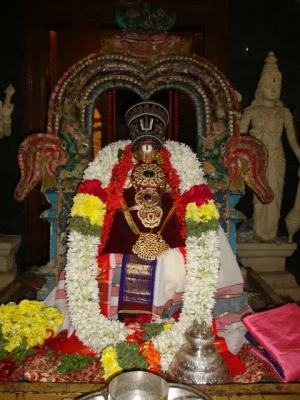 pinnai ulagAriyan ennum pEr, etc. – After getting the name due to him, the name lokAchAryar attained greatness (due to being associated with such great personality), and it was established for nampiLLai in all the worlds. After reaching him, this name stayed with him; by this, his being lokAchAryan was established without debate when the descendants of kUraththAzhwAn and mudhaliyANdAn surrendered unto nampiLLai’s divine feet.

The meanings said in this pAsuram, and for the other ones related to this – my (piLLai lOkam jIyar‘s) paramAchAryar periya pattar pirAn jIyar has mercifully explained this very well in anthimOpAya nishtai. See and follow in that.

In the previous chUrNais, bhagavadh rAmAnuja had spoken about namaSSabdhArtham (meaning of the word nama: as it occurs in dhvaya mahAmanthram). The meaning of the word nama:  is getting rid of enemies/obstacles. SrI rAmAnuja had prayed to bhagavAn in the previous three chUrNais for getting rid of his enemies – karma (past deeds), agyAna (ignorance) and dhEhasambhandham (connection with physical body, in other words with prakruthi). Is it not enough if enemies are got rid of? asks periyavAchchAn piLLai and he further adds that what SrI rAmAnuja is desirous of is parama purushArtham (the highest benefit that one can ask of bhagavAn), which is kainkaryam (doing service to bhagavAn). A prerequisite for kainkaryam is to have parabhakthi, paragyAna and paramabhakthi (we have seen in detail about these states of bhakthi in the 2nd chUrNai itself) and for parabhakthi, the prerequisite is bhakthirUpaApannagyAnam (knowledge that would have the form of bhakthi; in simple terms, it means love for bhagavAn). SrI rAmAnuja prays for this gyAnam from bhagavAn in the 13th chUrNai, quoting what bhagavAn himself said in bhagavadh gIthA, when he took the avathAram (incarnation) of SrI krishNa. In the 7th chapter, 17th to 19th SlOkas (verses) , SrI krishNa quotes on the supreme features and qualities of his bhakthas. SrI rAmAnuja repeats these three SlOkas here and requests bhagavAn to make him one such bhaktha and to grant him gyAnam. Let us look at the chUrNai now:

There are 4 types of bhakthas, says SrI krishNa in the 7th chapter of bhagavadh gIthai – those who want all the riches that  they once had, but had lost subsequently; those who want to become wealthy, for the  first time; those who want only kaivalya mOksham (an inferior mOksham wherein the jIvAthmA enjoys itself, without extolling the virtues of bhagavAn and doing kainkaryam to him) and those who want bhagavAn himself so that they could carry out kainkaryam to him eternally. SrI krishNa calls the fourth among the above as gyAni, the knowledgeable since he (the bhaktha) knows what is his swarUpam (basic nature) and what he should do. Let us now look at the meanings of these verses.

thEshAm gyAni – thEshAm – among them (among the 4 types of bhakthas, as mentioned above); gyAni – the knowledgeable. As previously mentioned, krishNa calls his bhaktha as gyAni as he knows where he stands and what he should do.

viSishyathE – said to be the best among. The gyAni stands out among the four types of bhakthas.

nithya yuktha: Ekabhakthi: – This is what makes the gyAni special or best among the four. nithya – always; yuktha: – joined; the gyAni desires to be with bhagavAn himself permanently unlike the other types of bhakthas who leave bhagavAn once they get whatever they had asked for.

Ekabhakthi: – single point of devotion. The gyAni does not ask for anything else from bhagavAn unlike others who need various things. The other three types of bhakthas are desirous of prayOjanAntharam (other benefits) while bhagavAn himself is the prayOjanam (benefit) for gyAni. Hence he has only one bhakthi (devotion) which is towards bhagavAn himself while the other 3 types of bhakthas have devotion towards what they desire (purushArtham) and bhagavAn through whom they have to get the objects of their desire.

priyO hi gyAninOthyartham aham – priya: – beloved; hi – surely; gyAni – bhaktha; athyartham – supreme; aham – I. bhagavAn says that gyAnis (the knowledgeable bhakthas) treat bhagavAn as a supremely beloved person. It is  not possible to describe the love that gyAnis have towards bhagavAn. It is so exalted.

sa cha mama priya: – sa – he; cha – also; mama – to me; priya: – beloved. bhagavAn says that such a gyAni is also dear to him. But bhagavAn makes a difference here between the love of gyAni  towards him and his love towards gyAni.  He says that if the gyAni’s love is like an ocean, his own love towards the gyAni is like a little pond. Why does bhagavAn belittle his love and magnify his bhaktha’s love?  The bhaktha lives in samsAram (materalistic realm) and is constantly troubled by his karma (past deeds), janma (repeated births), avidhyA (ignorance) etc. There are any number of hurdles or enemies for his bhaktha to show his love, while there is no such hurdle for bhagavAn to show his love. bhagavAn is vipu (huge) while the bhaktha is aNu (atom). It is like a 6 footer taking a step to cover 2 feet and a worm crawling for a whole day to cover the same 2 feet. The end distance covered is the same 2 feet, but there is a huge difference in the effort put in by the 6-footer and the worm. Moreover the bhaktha keeps wailing continuously imploring bhagavAn to take him away from samsAram, making it difficult for even the omnipotent bhagavAN to sit in SrIvaikuNtam. bhagavAn says that his bhaktha’s love is so heavy that he is not able to sit in SrIvaikuNtam.

udhArAs sarva EvaithE – udhAra: – (most) generous; sarva – all; EthE – these; Eva – only; krishNa says that all these people (all 4 types of bhakthas as mentioned above) only are most generous. This may sound strange when in reality we ask bhagavAn for various needs and he gives these to us and thus we are the seekers and he is the most generous. Why is SrI krishNa reversing the roles? He says that unless the bhakthas ask him for favours, how can he give them (here the hidden meaning is “what if they ask some other dhEvathA”)? Thus to get a name for himself (as the giver) he needs people to beseech him and he calls them as most generous.

gyAnithu – gyAni – knowledgeable (here the reference is to his bhaktha); thu – but. 4 different types of bhakthas may ask him for favours, but among them the gyAni is….

Athmaiva – AthmA – sentient being; Eva – only. SrI krishNa says that only the gyAni is his AthmA; bhagavAn lives inside the gyANi and the gyAni bears him from outside. In other words, the gyAni is the reason for the existence of bhagavAn. This sounds strange and completely reverse of what we all know of. But, bhagavAn says that this is …..

mE matham – mE – my; matham – opinion. bhagavAn says that let anyone think whatever he wants on hearing this. But he is firm in his mind that he lives because of such gyAnis.

anuththamAm gathim mAmEva – anuththamAm – nothing higher than; gathim – refuge; mAm – me; Eva – only.  Continuing from the previous part of the Sloka (verse), SrI krishNa says that for such a gyAni, there is no refuge higher than himself (bhagavAn).

Asthithas sahi yukthAthmA – Asthitha: – dwells on; sa – he; hi – surely; yukthAthmA – intent upon. SrI krishNa says that such a gyAni keeps dwelling on himself constantly to reach him as there is no refuge higher than himself to such a gyAni.

bahunAm janmanAmanthE – bahunAm – many; janmanAm – births; anthE – end. An AthmA has taken many many births and at the end of one such birth…

gyAnavAn – has knowledge; such a person gains knowledge of only bhagavAn and nothing else.

vAsudhEvas sarvamithi –  vAsudhEva: – only vAsudhEvan (son of vasudEva in krishNavathAram); sarvam – everything; ithi – so. The gyAni knows that bhagavAn is everything, taking the place of whatever he had given up (mother, father, teacher, relatives, wealth etc which we had seen in chUrNai 6). As nammAzhvAr says, bhagavAn is water, food and betel leaves to him (that which sustains, nurtures and offers pleasure).

prapadhyathE – take refuge. The gyAni gives up everything and comes to bhagavAn and holds on to him as the only refuge.

sa mahAthmA – sa – he; mahAthmA –  eminent. bhagavAn describes such a gyAni who considers bhagavAn as everything as a mahAthmA. When bhagavAn is the mahAthmA (the big AthmA) and we, the jIvAthmAs are small (we are in subtle form, less than the size of an atom) why is bhagavAn calling a jIvAthmA (gyAni) as mahAthmA? The reason is similar to what we had seen under the verse “sa cha mama priya:” under the second slOkam among the three slOkams above. bhagavAn is in an absolutely pure form, with no fault capable of getting anywhere near him whereas the jIvAthmA is living in samsAram, surrounded by all faults. Despite this, the jIvAthmA is knowledgeable enough to give up everything in samsAram and take refuge under bhagavAn, taking him as everything that he has given up. Hence krishNa calls such a gyANi as mahAthmA.

su dhurlabha: – su – very; dhurlabha: – difficult to obtain or find. krishNa says that it is very difficult to see such a person not only in samsAram, but also in paramapadham (SrIvaikuNtam). The samsAram is capable of shaking up even a great AchAryan (teacher) and trap him in its fold. Even in such a realm, the gyAni is able to stand firm and look at bhagavAn alone and nothing else. Hence it is difficult to see such a person anywhere, contends SrI krishNa.

SlOkathrayOdhitha gyAninam mAm kurushva – SlOkam – verse; thrayam – three; udhitha – told; gyAnina: – knowledgeable-like; mAm – me; kurushva – make. bhagavadh rAmAnuja prays to bhagavAn to make him also a gyAni as he had mentioned in the three SlOkas in bhagavadh gIthA. In the first slOka, SrI krishNa said that gyAni is dear to him. In the second, he said that he bears him and in the third, he said that it is very difficult to find such a gyAni who has the qualities mentioned in the first two slOkas.

Let us now look at the 14th chUrNai.