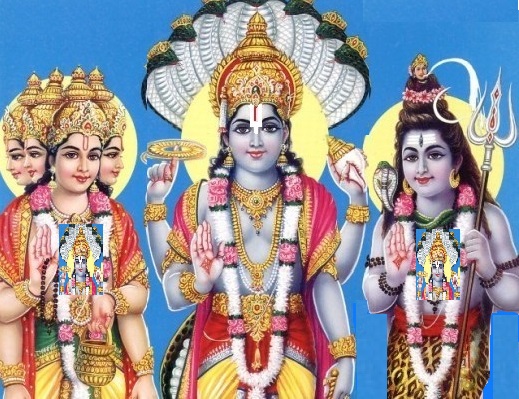 Even though one can realise one’s own self which is gyAna svarUpam (being gyAnam), having gyAnam and free (different) from matter, one cannot easily understand sarvEsvaran who descends into many different forms to accept his devotees. One will be always confused as to whether this supreme lord is brahmA, rudhran or srIman nArAyaNan. How to understand the truth in such a case?

In this 6th pAsuram, when sarvEsvaran (supreme lord) assumes a form amidst brahmA and rudhran (like them) to manifest his simplicity, that itself becomes the cause of confusion to determine as to who is the supreme lord. nammAzhwAr clarifies that by clearly explaining mUrthy thrayam (three forms) and eliminates the difficulty in establishing his supremacy.

Subsequently, the first avathAram (incarnation as vishNu) amidst brahmA and rudhran will lead to considering him as the same as the other two – it is difficult to understand the truth, so you contemplate it and approach the right person.

AzhwAr! you said approach emperumAn‘s incarnations. It is explained in srIrangarAja sthavam 2.81 “madhyE virincha girisam prathamAvathAra:” (your first incarnation that was in-between brahmA and rudhra…). Each of those 3 is engaged in equivalent roles (srushti – creation, sthithi – sustenance, samhAram – annihilation). In this situation, it is difficult to determine – “Are all these 3 primary? Is there one among the three who is primary? Is there another one who is higher than these 3?” and approach the right person. Can you not establish the supreme person so that we can approach him? AzhwAr replies “Instead of considering the body as self, considering that the self is different from body is difficult to achieve. Even if this is understood after trying very hard, it is even more difficult to understand the true nature of sarvEsvaran who has brahmA, rudhran, et al as his body. Thus, try to understand him properly though this manner (as explained in the pAsuram) and approach him”. He explains as to who is the approachable object and how to approach him.

uNarndhu uNarndhu – Since jIvAthmA is naturally knowledgeable, being the one who realises oneself constantly
izhindhu aganRu uyarndhu – since that gyAnam (knowledge) is unlimited in its pure form, pervading in all directions
uru – unlike achith which can be in a form/shape
viyandha – being distinct
innilaimai – the state of such AthmA
uNarndhu – realising it through hearing
uNarndhu – further, realising it through contemplation
uNarilum – Even when realised through yOgam
iRai nilai – the nature of sarvEsvaran who is concealing his supremacy and presenting himself in between brahmA and rudhran
uNarvaridhu – difficult to understand
uyirgAL – Oh chEthanas who have the ability to discriminate between different aspects and understand the same!
ari ayan aran ennum ivarai – those who are popularly known as hari, ajan (brahmA) and rudhran (siva)
uNarndhu uNarndhu – analysing their qualities, wealth, nature etc
uraiththu uraiththu – reading through those pramANams which reveal their qualities, wealth etc.
manappattadhu onRu – whoever is understood as ISwara
uNarndhu uNarndhu – meditating on such person’s guNa (qualities), vigraha (forms) etc., constantly
uraiththu uraiththu – reciting manthrams and nAmams (names) of such sarvEsvaran constantly
iRainjumin – you perform worship

Oh chEthanas who have the ability to discriminate between different aspects and understand the same! Since jIvAthmA is naturally knowledgeable and that knowledge in its pure form is unlimited and expanding in all directions, one can understand that the AthmA is different from body by hearing and meditating and realise the self. Even if that is accomplished, it will be difficult to understand the nature of sarvEsvaran who descends amidst brahmA and rudhran in a concealed manner. Knowing the three popular dhEvathAs brahmA, vishNu and rudhran, analysing their qualities, abilities etc., through the pramANams which reveal them, understand the supreme being amongst them. Having understood that, meditating on his qualities, abilities, etc and reciting the manthrams and his names, approach him and worship him.