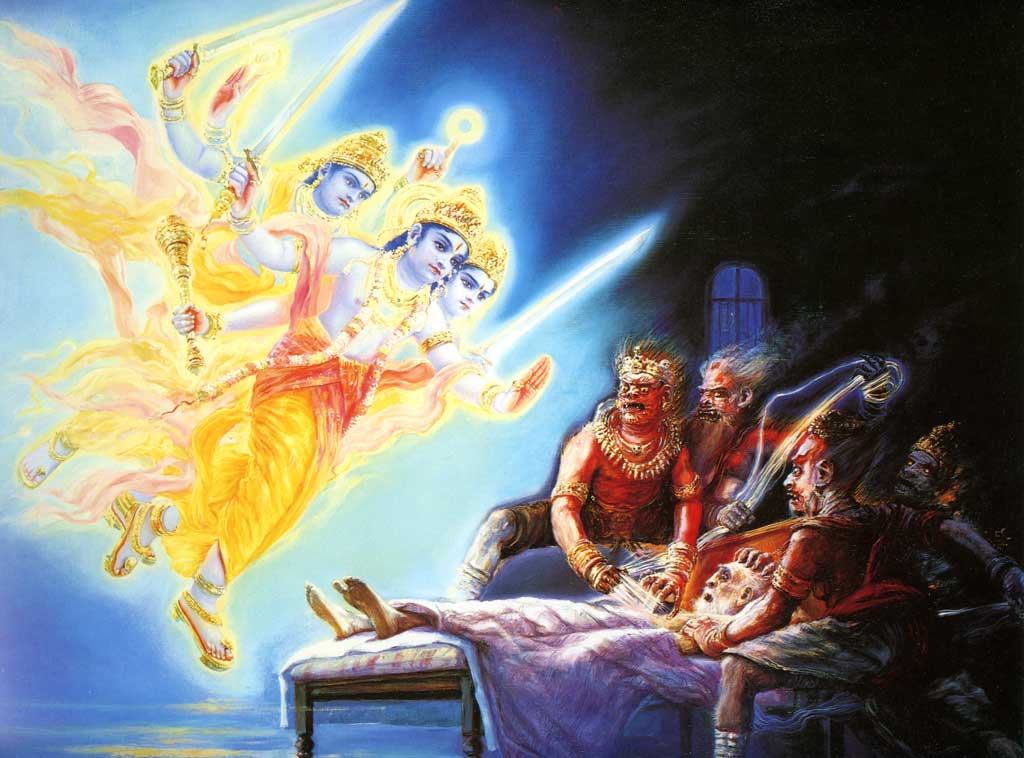 In this ninth pAsuram, nammAzhwAr says that by approaching emperumAn the hurdles which stop us from reaching emperumAn will be destroyed. It is only delayed until the end of this body/life.

Subsequently, nammAzhwAr explains the removal of hurdles which is the result of worshiping emperumAn.

ninth pAsuram – In the previous 2 pAsurams, nammAzhwAr explained that one should not shy away from emperumAn since everyone is eternally related to emperumAn (pAsuram 7) and worshiping him is by engaging the senses given by him in his service (pAsuram 8). Are we not worshiping him due to lack of knowledge? We are actually not serving him due to our hurdles. nammAzhwAr says that by approaching emperumAn, the hurdles will go away.

avan kaN – unto the master
odunga – being bound to him as per apruthak sidhdham (inseparable aspect)
odungalum – Contraction of AthmA’s  knowledge etc
ellAm – the cause for such contraction such as avidhyA (ignorance) etc
vidum – will leave, will be eradicated
pinnum – After that, as explained in mahAbhAratham “kruthakruthyA pradhIkshanthE” (those learned persons who have completed all that is to be done and expecting).
Akkai – the remaining life of the current body
vidum pozhudhu – end
eN – look out for it

As one gives up everything unto the master (bhagavAn), avidhyA (ignorance) etc and the contraction of AthmA’s knowledge will be eliminated. After that, one can surrender to emperumAn and seek out for his kainkaryam at the end of the this life itself.

It is explained as “Akkai vidumpozhudhu eNNa vENumO” (should we think about him at the end of our life?) Also, some explain this as a part of bhajanam (worshiping or more specifically bhakthi yOgam) saying “subsequently, think about him while giving up your life”.

By engaging our senses in his kainkaryam always, all hurdles will be removed. After that, please wait until the current body dies – that is how long it takes to attain the ultimate result.