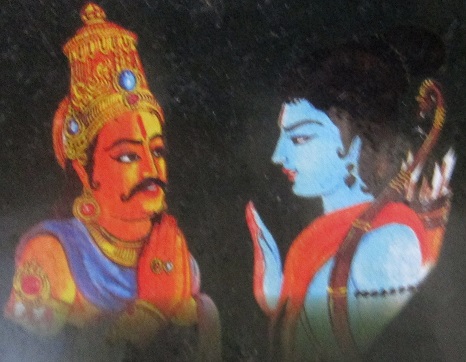 vibhIshaNa gave up everything and approached srI rAma

nammAzhwAr explains the glories of emperumAn who is being approached.

Subsequently, nammAzhwAr explains the distinct nature of emperumAn who is worshipped after giving up worldly attachments.

illadhum – non-existing, due to constant transformation of the entity itself, achith (matter) is indicated using the word “asath”
uLLadhum – existing, due to unchanging nature, chith (soul) is indicated using the word “sath”
alladhu – not,  different from
avan – his
uru – svarUpam (nature)
ellaiyil – unlimited
annalam – having (the previously explained) quality of bliss
paRRu aRRu – giving up attachment towards other worldly pleasures
pullu (pulgu) – approach him with devotion

As “pullu” indicates abundance of friendliness, it highlights the loving nature of this devotion.

If someone says “We can pursue bhagavAn only if he is distinct from and more glorious than the worldly pleasures which are to be given up”, AzhwAr explains to them that bhagavAn is devoid of any defects, filled with all auspicious qualities, being distinct from chith and achith and because of all of these, he is most enjoyable. Thus, give up attachment to these faulty aspects and approach him.