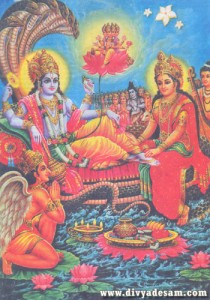 In the last pAsuram, swAmi AruLaLa PerumAL EmperumAnAr discussed about the state of those people who knew the essence of being a slave to his master. They will never resort to worldly wealth, even if it was to include the highest of worldly wealth namely the worlds of BrahmA. In this pAsuram, swAmi goes ahead and says that those who are deeply immersed in PerumAL’s beauty, they will not even see other things that are claimed to be beautiful or object of enjoyment. This forms the crux of this pAsuram.

thOLAr sudarth thigiri sangkudaiya sundharanukku:    PerumAL holds HIS divine discus in HIS right hand and the divine conch in HIS left hand. perumAL, when seen with these two, appear more beautiful than when HE is not holding them. These two can be thought of as weapons that instill fear in the minds of the enemies and annihilate them. However, for HIS devotees they do appear more as objects of decoration. So He is being described as “azhagan”. swAmi bhUdathAzhwAr in his irandAm thiruvandAdhi says “manaipAr pirandhAr pirandheydhum perinbamellAm thurandhAr thozhudhArath thol”. This means that those who see perumAL’s shoulders and get lost in its beauty, they will relinquish whatever objects of enjoyment and happiness that they had adhered to hitherto.  In srirAmAyanam, those who saw the shoulders of Lord rAmA did not want to see any other thing. kambanAtAzhwAr in his kambarAmAyanam exclaims “thOl kandAr thOlE kandAr”. In the same kambarAmAyanam, kambar describes Lord rAmA through vishwAmitrA’s words “Adavar penmayayi avavum thOlinAi”. This says that those men who had seen the shoulders of Lord rAmA would be yearning and wish to have been born as a female. Swami nammAzhwAr said “thOlumor nAngudai kAlamegathai andri matrondru ilam” to say that there is nothing more than the kAalamegha perumAL at ThirumOghUr who gives darshan with HIS beautiful shoulders. We should take “hArathi” for perumAL who is just stunningly beautiful with the discus and conch. People who have seen this beautiful form of PerumAL, will never ever get resort to any other things/persons/objects that were celebrated as beautiful earlier. perumAL’s shoulders’ beauty alone shall cut asunder all their high esteem that these people had on worldly beauties and enjoyments. AzhwAr said “aniyAr Azhiyum sangamum yEndhum avar kAnmin”. When perumAL holds both such wonderful discus and conch over HIS shoulders, HIS beauty gets doubled automatically. Such was the shoulder’s beauty. periyAzhwAr was describing perumAL’s beauty one by one. Firstly, he sang glories to perumAL, then went on to sing glories to perumAL and pirAti who lives in HIS divine chest. After this, he sang about the beauty of the divine couple when perumAL holds HIS discuss. All these have been described by periyAzhwAr in the first three lines of second pAsuram in Thirupallandu. These first three lines, have been sung in direct speech, meaning periyAzhwAr is facing perumAL and says “Long live, You, Long live You and Your consort pirAti, Long live You and the resplendent discus that You hold on Your right hand”. At this point, the conch entered the scene and perumAL showed his form with pirAti in His chest, discuss in HIS right hand and conch in HIS left hand. He was at his very best and strikingly beautiful. periyAzhwAr could not take any more of HIS beauty that he literally began to turn his face away from perumAL who was standing right in front of him. Since he turned away, he now started to sing “appAnja sanniyamum pallandE” or “let that conch that blows the divine sound during times of war, also live long”. He did not say it in direct speech facing perumAL and which is why he said “let that conch also live long”. He just could not face and see the extreme beauty of perumAL when HE appears with the conch on HIS left shoulders. Such is the beauty of perumAL. Can anyone who has seen this resort to wordily pleasures?

AlanAr:   This refers to the group of people who were bowled over just by HIS beauty alone. There are two way perumAL attracts us. The first type is when He manifests HIMSELF as the sustainer, a leader and shows HIS heroic qualities and makes sure that we, jIvAthmas, are under HIS Lotus Feet. In addition to this HE shows his unparalleled superior characters starting with HIS beauty, ease of accesibility, ability to mix freely without any inhibitions of caste, creed, color and species.  In the previous pAsuram, “pundarIgai kElvan adiyAr” refers to the first type, where HE is described as the ONE who is the consort of pirAti. “sundaranuku AlanAr” is used in this pAsuram to refer to the second type whereby perumAL make us crave for HIM with his qualities starting from HIS outstanding beauty that is one of the easiest quality to see and appreciate even for jIvAthmas like us. perumAL uses these two methods to make jIvAthma realize that he is a servant to HIM, be it for the beauty or any of HIS  other qualities. Swami aruLaLa perumAL emperumAnAr describes and praises those devotees that are completely awestuck by HIS beauty that they hand it in writing that “perumAL is my eternal master forever”.

Matrondril anbu seyyAr:  People who have realized the true nature of the soul and the divine qualities of perumAL will never develop any sort of attachment to worldily stuffs. Srivaikuntam is a place that is made of sutha sathvam (heights of purity) qualities. It is being referred to as “aprAkrutham” or “without the bounds of nature”. On the contrary the universe in which we live is termed as “prAkrutham” or “within the bounds of nature”. All objects in this universe are constrained by space and time and so are subjected to transformation from one form to other at some point of time. But in Srivaikuntam, it is not so as time does not exist there. On top of it, objects / persons over there attract our mind easily. Hence, those people, who can analyze the differences between the inferior nature of objects in this universe and the superior and the most ultimate nature of those in Srivakuntam, accept the fact that nothing in this universe can bowl over them, after knowing Srivaikuntam. Can they ever desire of worldy pleasures anymore? Certainly not and the reason is that these worldly stuff and their so called pleasures appears good only from outside while it is not. As they say beauty is skin deep, passage of time deteriorates anything in this world, whereas it is never a concern in Srivaikuntam, which is there forever. The worldly objects not only deteriorate over time but they are also objects that needs to be condescended.

mILAp poruvariya viNNAttil bOgam nugarvArkku:  Srivaikuntam, as discussed earlier, is describe as a place of no return, a resplendent place where time does not exist and the enjoyment is forever, an unparalleled place where there is nothing called “construction” and “destruction” of it, a place beyond nature and laws of this universe, a place like nothing else literally. This is the place where saranAgathas yearn to go for and enjoy being a servant of his master sriman nArAyanan, Pirati and THEIR devotees.

naraganRO indhiran than nAdu?:   Heaven is a place which a jIvAthamA goes to, by virtue of his good karma. He enjoys there in measures equal to that of his saved karma. After all the good karma’s benefits have been reaped by the jIvAthamA in heaven, he will be thrown upside down from there to this earth again. The same is true for hell as well, where after one suffers pain to the extent he has bad sins, he is being born again in this earth in a cycle of birth and death. Indira is the chief of heaven and other such celestial worlds, where dEvAs who are as well bound by karma , go there, live and enjoy for very much longer time than an ordinary jIvAthamA like us. They will also be destroyed at one point of time but the time when they exist, they feast on the enjoyments available to them there. This enjoyment is also not forever and more importantly, the enjoyment is not towards serving the Supreme Lord. They enjoy for their own happiness which is fundamentally opposite to the basic nature of a jIvAthamA who had realized his own self of doing kainkaryam to PerumAL for HIS happiness is the ultimate wish for him. So, a saranAgathan would treat heaven and hell as one and the same time and regard them as a place of suffering for him. As described in the second pAsuram, whenever saranAgathas are separated from perumAL and pirAti, that is hell for them.They care least for the heaven , its enjoyment and whatever it has to offer. They absolutely loathe it for they are interetsted in the ultimate enjoyment of sriman nArAyanan.