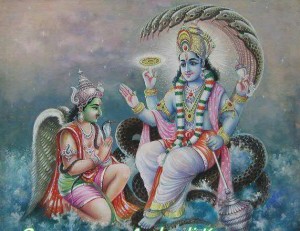 (a) AatRu nIr – from rivers

(b) UtRu nIr – Underground water and

There are several ways to reach PerumAL. Some of them include Karma yOgam, bhakti yOgam and gyana yOgam etc. These are not practical and extremely difficult paths. More importantly, they are in stark contrast to jIvAthma’s basic nature of being a servant to his Master. Since there are a lot of pain points in these methods, they are to be discarded by all means. These pain points and flaws will never take a jIvAthma unto his paramAthmA and thus taking refuge under the Lotus Feet of the Lord is not only the only way available to him but also the end destination. But this jIvAthma, who has been under the clutches of the five senses for innumerable eons together, and who has realized and performed saranAgathi, will he be seduced by worldly wealth that has been condemned by our scriptures?. Will those wealth not entice him? If these are the questions raised by a person, then the answer lies in this pAsuram.  The key message is that those who have done kainkaryam to perumAL and know the value of it, will dismiss all other wealth even if that wealth included the likes of the highest possible wealth that is available in universe – BrahmalOkam. The BrahmalOkam will be totally insignificant to them is what Swami AruLaLa PerumAL emperumAnAr conveys here. A case in point is the story of sarabangha muni in srirAmAyanam.

Lord rAmA went to the hermitage of sarabangha muni in the dhAndaka forest. indirA was talking with sarabanga muni then. After indirA took leave, Lord rAmA was about to enter the hermitage along with his brother lakshmanA. Even before Lord rAmA could enter, sarabangha muni expected HIS arrival through his divine powers. Then, sarabangha muni actually saw Lord rAmA infront of him and was on cloud nine and said “indhiran arulinAn irudhi sei pagala vandhanan, maruvudhi malar ayan ulagam thandhanan”, en, uravoy! andhamil uyarpadham adaidhalai muyalven”. The meaning of this is that sarabangha said “Oh! My Dear rAmA with beautiful eyes!!! BrahmA had sent IndirA to get me there and enjoy the benefits of BrahmalOkam. I said I would not come”. Muni continues “nI ivan varudhi” enum ninaivu udaiyEn, ini oru vinai ilai, viralOy. sarabangha says “ I have been waiting and has been expecting for the arrival of Lord rAmA in his hermitage for a long time. I am yearning for this wealth – Lord rAmA’s arrival and to bless my hermitage with YOUR divine feet. With such a wealth in mind, will any other worldy pleasures such as being a king of all worlds or for that matter even BrahmalOkam, can that distract me and take me away from my destination that is You my dear rAmA?. I told IndirA, No. I do not want any of those so-called benefits or enjoyments. I am in for the greatest of all wealth that is nothing but being a servant to the Supreme Lord rAmA”. Thus for a saranAgathan (one who does saranAgathi) nothing can affect his sternness in reaching PerumAL is the crux of this pAsuram.

Swami nammAzhwAr says ““pandai nAlalE nindriruvarulum pankayathAL thiruvarulum kondu” (ThiruvAimozhi 9,2,1). AzhwAr, as jIvAthma’s representative, had accrued a lot of sins before getting blessed by the causeless cause PerumAL along with HIS consort PirAti. After being blessed, all his sins had been burnt like cotton in a fire, AzhwAr began to sing “yAne ennai ariyagilAdhE, yAnE endhenadhE endrirundhEn, yAne nI en udaimayum nIye”. Loosely translated it means that AzhwAr was oblivious for his own self, the true nature of jIvAthma, he was always behind the two “I” and “Mine”. This is all mattered to AzhwAr the most before the DIVINE couple blessed AzhwAr. But after being blessed, AzhwAr was able to realize his true self and acknowledged the fact that he and his so called possessions if any are not for himself but only for the DIVINE couple. Thus, saranAgathas like AzhwArs will value the wealth that they have got which is nothing but the wealth of doing kainkaryam. They will value this immensely more than anything else in this world and will be proud to be a sevant and do kainkaryam with extreme happiness, not for a moment, but forever. They will be immersed in this enjoyment only and will not come out of it at any cost.

apUmisaiyOn andam oru porulA AdhariyAr: We need to understand what kind of wealth are these saranAgathas dismissing as non-entity or non-existent. In order to understand, let us think of the maximum desire for a person in this world. Let us for a moment be creative and say Rs. 10000 Trillion. Add on top of this other luxuries like house, other properties and whatever we are able to think. These pool of luxuries that we can think of let say it can yield us 1 unit of happiness. The happiness that devas get is 1000 times bigger than that of humans. Similarly, this scale of 1:1,000 grows exponentially as devAs are compared with superior demi-gods like Rudran etc. At the pinnacle of all these happiness rests the BrahmalOkam that is like 1 million unit of happiness. If someone takes this and offers it to a saranAgathan, like in the case of sarabangha muni, he will dismiss it as insignificant because what he is going to get is not measurable in the first place. All these pleasures can be measured. But doing kainkaryam to PerumAL, PirAti and THEIR devotees, can there be a measure. In addition to that, the other pleasures are constrained by time, whereas the wealth of kainkaryam is forever. The concept of time does not exist in Srivaikuntam.

The vast majority of people today are of the opinion that there is no difference between body and soul. They regard their body as everything and do things based on what they think is right. If they dont even realize the difference between body and soul, they can’t even elevate to a higher platform whereby they are able to accept that they are servants to the Supreme. They think that on just the two basic dimensions “I” and “Mine” and think they are independent and control their actions. To fools like these people, these aforementioned wealth would definitely entice and will be their ultimate goal in life since they do not know to value the ultimate gift of being a servant to the Master. saranAgathas, who realize the true nature of soul, will have a condescend these wealth and would look at these with hatred. They will never ever get enticed by it. To illustrate this point, Swami AruLaLa perumAL EmperumAnAr gives an analogy. A fish that lives in a mighty ocean, how much ever it sways left and right with all its might cannot distort or transform a sea. The ocean will continue to remain as ocean no matter how much great the efforts of that tiny little fish is. The efforts of the fish is like the wealth of BrahmalOka and sea is the ultimate wealth of being a servant and doing kainkaryam to PerumAL, PirAti and THEIR adiyArs.