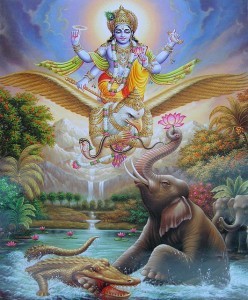 vidil = If one gets separated from

ambuyathAL kOn-ai = the king of the one who sits on the Lotus (emperumAn, the king of pirAtti)

Anai iDar kadindha = (who) removed the suffering of the elephant (gajendhrAhvan)

Azhiyangai (Azhi-am-kai) = (and who) holds Azhi (discus) in his beautiful (am) hand (kai),

meen enavE = (they would), like the state of a fish

kudhithezhundha = that jumped and came out

Akkai mudiyum padi pirathal = they would reach the state of destruction of the body (die);

nilai = such is the state of

nIkkamilA = who never want to get separated

In the last pAsuram, swAmi aruLALa perumAL emperumAnAr talked about a state of bhakthi known as “para bhakthi”, where one suffers much when he gets the thought that he is separated from Sriman NArAyanAn, and he is at home when he is in unison with Him. In this pAsuram, swAmi talks about “parama bhakthi” that is an even advanced stage. In this case when one is separated from Sriman NArAyanAn, then it is now not a question of suffering; the person would reach the stage of dying soon. SwAmi explains this with an example in this pAsuram.

The story of gajEndrAzhvAn is mentioned quite often in puraNAs and AzhvArs’ pAsurams. GajEndrA the elephant wished to place lotus flowers at the feet of emperumAn, retrieved them from a pond and got to the shore. A crocodile which was looking for an elephant that would get rid of a sin that had been cast upon it, caught hold of gajEndhrAzhvAN’s leg. Gajendra pulled its leg towards the land and the crocodile pulled it towards the water. This continued for 1000 deva years (360,000 human years). Crocodile grew stronger and stronger since it was his home turf and because it was going to get its wishes satisfied; the elephant grew weaker and weaker because it was not his home turf and since it was not getting his wishes satisfied. GajendrazhvAn was losing all his hope as only his trunk was above the water then. He quickly realized that there cannot be more danger than this and he thought “One whose nature it is to remove the obstacles of devotees is our protector” and so cried “nArAyaNA!!! O!!! maNivaNNa!!! nAgaNaiyAi !!! vArAi en AriDarai nIkkAi” (phrase from thirumangai AzhVar’s siriya thirumadal). Lord nArAyaNan rushed immediately and removed the sadness of gajEndrA. gajEndra did not fear for his body getting destroyed in the crocodile’s mouth, his fear was about keeping the beautiful lotus flower intact when he presented it to emprumAn’s thiruvadi. It was this fear of the devout gajEndra that  nArAyaNA got rid of by showing up quickly.  This is mentioned in the pAsuram in ‘yAnai iDar kaDindha’.

Swami nammAzhvAr, in his Thiruvaimozhi 3,1,9, says:

It is clear that perumAL rushed with the discus to save the elephant. SwAmi parAsara bhattar salutes to His speed. PerumAL took off from His celestial abode and He did not even pay attention to the fact that He always holds His discus in His right hand. Had He remembered it, He would have cast it right from where He was and the discus would have done its work. Or, even if He had known that He holds the discus in His hands forever, He chose to rush to the elephant and used the discus, is another meaning. The reason is, as we saw in nammAzhvAr’s pAsuram, gajEndrA is being celebrated as “kAdhal kaLiru” because of his untainted love for perumAL. GajEndrA wanted to enjoy the beauty of emperumAn with the discus in His beautiful hand; he wished to offer the flowers to bhagavAn’s thiruvadi. So, perumAL, instead of doing the work from His place, went to the lotus pond. The inner meaning of this is that perumAL is ready to give Himself the way His devotees wish to see Him. SwAmi pEyAzhvAr, in 99th pAsuram of his mUndrAm thiruvandhAdhi, also sang about it – “kuttaththu kOL mudhalai thunja kuriththerindha chakkaraththAn”.

ambuyaththAL kOnai: It refers to emperumAn who is the hero of periya pirAttiar who was born on a Lotus flower. PurANa says that when emperumAn was lying down on Adhi sEshan in thiru pArkadal (milky ocean), with bhUdevi and nILAdevi massaging His divine feet, and Him hugging srIdevi thAyAr in His divine chest, He heard the call of gajEndra. PerumAL then took His feet very gently from the thAyars doing service, He sat up on His divine serpent bed, opened the petals of His divine eyes, looked everywhere around Him, and tactfully moved his chest from srIdEvi whom he was hugging.  Only after that, to everyone’s awe, did He immediately spring upon His divine carrier garuDa and rushed to gajEndra and saved him from his sorrow. Like how a mother would be happy if a king protects the people well, it is periyA pirAtti who would be happy to see emperumAn save the bhakthas from their sorrows. This is why PerumAL is being referenced with respect to pirAtti and described as “ambuyathAL kOn” in this pAsuram. So, this pAsuram says that ‘emperumAn would go to the place of a devotee who has surrendered to Him, for saving the devotee’, that He would not think that He did it for such devotees and instead would think that He did it to satisfy Himself, and, such a perumAn is the husband of periya pirAttiAr.

vidil: If a person happens to be separated from such a loving emperumAn,

neeril kuthithezhundha meen enavE: It would be like a fish that jumped and came out of the water;

thAL nIkkamilA anbar nilai: “thAL” is the Lotus feet and “nIkkamilA” is ‘without separation’. Love that does not tolerate separation from His lotus feet; Devotees who are so attached to Him that if they get separated from Him, then they are not able to live any more just like a fish could not live without water. This pAsuram explains that it is the state of parama bhakthi.