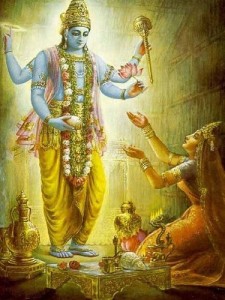 kudiyum kulamum ellAm  — The birth place, gender, gOthram and all other identifications at birth are rendered useless after reaching the

padiyin mEl nIr kozhuvum ARugaLin — The state of these devotees is the same as the rivers flowing on this earth, filled with water

Ar kali serndhida mAyndhaRRu — but when it mixes with the ocean, all these differences are destroyed and they become one

In the last pAsuram, svAmi aruLALa perumAL emberumAnAr told “evvuyirkkum indhirai kOn thannadiyE kANum saraN”. In this pAsuram, he gives an example to bolster that thought that it is sriman nArAyANan’s lotus feet that is the refuge for everyone one and the like. The devotees of sriman nArAyANan are called as “thirumagaL maNALanukku adiyAr” (devotees of perumAL who is the husband of pirAtti). These devotees before realizing their true svarUpam, have some kind of identification that includes a name in conjunction with their associated town, a name that is in conjunction with their associated varNam and many such associations. However, after they realize their true svarUpam (through the causeless cause of the divine couple and AchAryan), there is no identification of those town,varNam or whatsoever anymore. Their only identification that they have is sriman nArAyANan’s lotus feet and nothing else.

In these three, we can note that the authors have mentioned about one’s place of birth (kudi), varNam (kulam), gOthram and other birth identifications (ellAm).

padiyin mEl – on top of the earth

nIr kezhuvumARugaLin pErum niRamum ellAm:  Rivers have lot of water in them. Rivers have different names for them like Ganges, Yamuna etc and come in many colors as well like red, black, white etc.

Ar kaliyaich sErndhu – Once these rivers go and meet the ocean

mAyndhidum aRRu:  It is as similar in destruction (in the way rivers lose their unique identity after mingling up in the sea)

Conclusion: One’s earlier, historic identifications gets destroyed when one becomes a devotee. This destruction is similar to the destruction that individual rivers encounters upon mixing up in the ocean. Rivers lose their name, color etc. Hence, we should not give any importance to all those temporal and impermanent factors like varNam etc but should focus only on the only permanent thing that is called as “adiyarAm thanmai”. This is nothing but being a servant (devotee) of perumAL and pirAtti forever. This quality of being a servant of perumAL and pirAtti is not just for one or two selected souls. Instead it is for all souls one and the like. This would remove all differences arising out of temporal factors and unite all souls under one common umbrella known as “thirumAl adiyAr”.