bhagavAn is the recipient of SrI mahAlakshmi’s affectionate sight at all times. Even the dhEvas like brahmA, indhra et al, who have attained such superior positions due to her glances have only been subject to her glances in miniscule amounts and only momentarily. Whereas bhagavAn is glanced by her at all times with all affection.

“Oh maithrEya, SrI mahAlakshmi – adorned with white robes and beautiful garlands and divine jewellery – attained the divine seat of SrI hari’s chest even as all dhEvas were mere onlookers. Having been glanced by her – who was thus seated in SrI hari’s chest, all the dhEvas attained contentment right then” et al.

Thus, he is called ‘SrImathAm vara:’ – the most superior amongst those who are glanced by SrIdhEvi.

Etymology: The one who is superior amongst the dhEvas – who are recipients of SrI mahAlakshmi’s gracious glance – is called ‘SrImathAm vara:’.

bhagavAn keeps showering the wealth of ever new and causeless love upon SrI mahAlakshmi at all times. Thus, he is called ‘SrIdha:’ – the bestower of wealth.

This means that he is verily the life force of SrI mahAlakshmi. She also gets the name ‘SrI:’ (श्रीः) only because of her taking refuge under his feet.

Her nature is clearly shown in SrI rAmAyaNam thus: “Oh rAma! SItha and I cannot live even for a few minutes without you, just like fish taken out of water” (lakshmana says this while leaving for the exile).

This is also supported in other scriptures thus:

Etymology: He who bestows the elixir of his divine love to SrIdhEvi SrI mahAlakshmi is called ‘SrIdha:’.

Alternately, it can also be said that SrI mahAlakshmi herself is the mistress of bhagavAn (in other words, bhagavAn lets himself to be ruled by SrIdhEvi). She only drives him in all states (whether during creation, sustenance, or destruction, or even in the matter of granting mOksham). Thus also, he is called ‘SrISa:’ – the one who is ruled by SrIdhEvi.

This is supported by scriptural statements thus:

“SrI mahAlakshmi primarily binds bhagavAn by her divine qualities, and also with her supernaturally beautiful vigraham (divine body). She also possesses a superior nature with which she supports bhagavAn in all his deeds, and also shows her natural and eternal subservience unto him at all times. In all ways mentioned herein, she always stays very close to bhagavAn at all times”

Just as a divine creeper is supported by kalpaka vruksha (a divine tree – popularly referring to the coconut tree), so also bhagavAn is the resting place for SrI mahAlakshmi at all times. Thus, he is called ‘SrInivAsa:’ – the residence of SrI mahAlakshmi.

Etymology: Since bhagavAn is the resting place or the refuge of SrI mahAlakshmi at all times, he is called ‘SrInivAsa:’.

SrI mahAlakshmi is safely placed and protected in the divine chest of bhagavAn, just like a garland of valuable gems is safeguarded in a jewel chest. Thus, bhagavAn is called ‘SrInidhi:’ – the one who safeguards SrIdhEvi like a divine jewel in his chest.

Etymology: bhagavAn is called ‘SrInidhi:’ since SrI mahAlakshmi is safely placed in his heart at all times (like safeguarding a valuable jewel).

SrI mahAlakshmi is herself the cause for bhagavAn’s glories, splendour and fame. Thus, he is called ‘SrIvibhAvana:’ – the one who is manifest due to SrIdhEvi.

mArIcha hails this trait in SrI rAmAyaNa thus: “His valour is truly unfathomable, to whom that jAnaki belongs”

Etymology: He, unto whom SrIdhEvi herself is the cause of all splendour and fame, is called ‘SrIvibhAvana:’.

The inseparability of bhagavAn and SrI mahAlakshmi is shown in this divine name. Just as brilliance is natural to a gem, just as fragrance is inherent to a flower, just as cool rays are natural to the moon, and just as sweetness is inherent in nectar, so also bhagavAn inherently bears SrI mahAlakshmi in his divine chest. Thus, he is called ‘SrIdhara:’ – the one who bears SrIdhEvi in his chest.

Etymology: He who inherently bears SrI mahAlakshmi on his chest at all times – akin to the nectar, a gem, the moon and a flower bearing sweetness, brilliance, coolness and fragrance respectively – is called ‘SrIdhara:’.

Just as seen in his ‘para’ form (in the preceding divine names), bhagavAn maintains his inseparability with SrI mahAlakshmi even in his other forms such as ‘vyUha’, ‘vibhava’, ‘antharyAmi’ and ‘archA’. In all these forms, he accepts SrI mahAlakshmi as his consort in her respectively befitting forms.

The root ‘krunj’ कृञ् (to do) gets the ‘ta:’ (टः) adjunct as per grammatical rules, resulting in this divine name, thereby indicating bhagavAn’s nature of making her born in conformity with himself.

This is gloriously hailed by parAsara maharishi in SrI vishNu purANam thus: “Oh maithrEya! SrI mahAlakshmi is born with a ‘dhEva’ body when bhagavAn incarnates amongst dhEvas. When bhagavAn is born amongst humans, she also takes a human form. She was born as SIthA when he incarnated as rAma, and she took the birth of rukmiNi when he was born as krishNa. In whichever form he manifests himself, she also accompanies him in a complying form, and thus is ever inseparable from him”

Etymology: He is called ‘SrIkara:’, who makes SrI mahAlakshmi also born in various forms complying with himself in all his manifestations such as vyUha, vibhava, et al (including antharyAmi and archA). This seven lettered manthra confers wealth upon the chanters.

Etymology: That SrIdhEvi who is eligible to be surrendered to in order to attain any desired wealth is called ‘SrEya:SrI:’. Since she is in eternal union with bhagavAn, he is called ‘SrEya:SrImAn’. This eight lettered manthra is capable of conferring all desires of the chanter.

Being eternally united with SrI mahAlakshmi as shown in all the previous divine names, since bhagavAn is the father and the refuge for all individuals, he is called ‘lOkathrayASraya:’.

SrI vishNu purANa hails thus: “Oh mahAlakshmi! You are the mother of all worlds, and the lord of lords SrI hari is the father of all”

Etymology: Being associated with SrIdhEvi – the mother of all worlds, he who is the refuge of all individuals like a father is called ‘lOkathrayASraya:’. This ten lettered manthra protects the chanters from all evils. 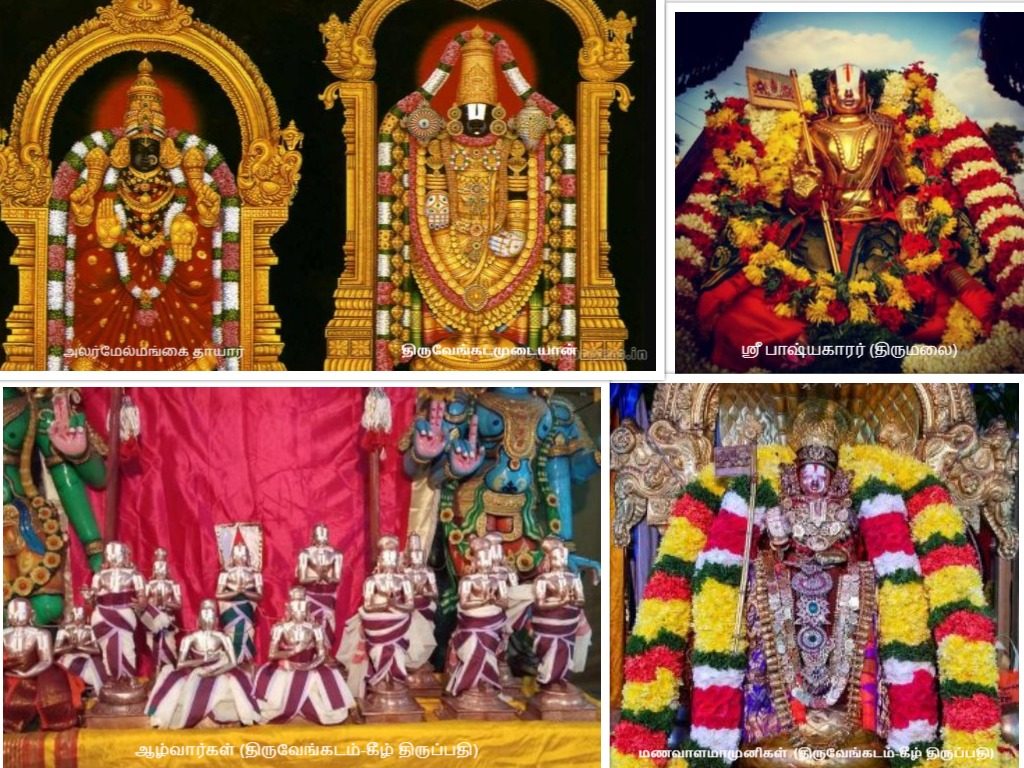 Sri SrinivAsa, who has creation, sustenance and deluge of the universe as his sport, resides atop the sacred hills of thiruvEnkatam also known as thirumalai thiruppathi. In SrivaishNava sampradhAya, three dhivyadhESams are hailed as kOyil, thirumalai and perumAL kOyil respectively. Among these, kOyil refers to SrIrangam , perumAL KOyil refers to SrI varadharAja swAmi temple – kAnchIpuram and thirumalai refers to the sacred hill shrine atop which Srinivasan resides with SrI (mahAlakshmi). Sriman nArAyaNa, has descended along with periya pirAtti, out of his unconditional mercy on chEthanas (sentient beings), to show  his pUvArkazhalgal  (His lotus feet is referred thus in this dhivyadhESam) to us and resides here in thirumalai along the banks of thirukkonEri – swAmi pushkariNI (the sacred pond or primary thIrtha of this dhivyadhESam).  Innumerable devotees surrender unto his lotus feet in thirumalai hailing him as their sole refuge, as declared in “kalau vEnkatanAyaka:”. The Sruthi, smruthi, ithihAsas and purANas hail SrI SrInivAsa, his sacred hill thirumalai and the nature of this dhivyadhESam to a very great detail. Among these, the compilation of the glories of thirumalai , as explained in the purANAs , is called as Sri VEnkatAchala mAhAthmyam . vEdha vyAsa, composed these for the benefit of all of the humanity.

The sanskrit word purANa can be explained as “purA api navam” ,“purA bhavam” , “purA AkathanAkathanau anathi kathayathi” and “purA nIyathe”. Literally, these explanations indicate that the purANas , show us the correct direction of our present by presenting the happenings of very distant past. The purANas are of two types viz., mahA purANas (simply denoted as purANas henceforth) and upa purANas . purAnas and upapurANas are 18 each in number. 10 among them hail thirumalai in great detail. These are :

Along with these, harivamSa , which is also called as the 19th parva of mahAbhAratha, also glorifies the greatness of Thirumalai.

Greatly desirous of having the chEthanas surrendered to him, Sriman NArAyana, left his eternal and ever blissful abode – SrI vaikuNta and descended to thirumalai which is dear to him. Though, it is not possible for anyone to completely sing or praise or comprehend or listen to the greatness of SrI Srinivasa , his auspicious qualities and his sacred hill’s greatness, knowing Sri vEnkatAchala mAhAthmyam (which is a compilation of conversations between maharishIs)  will give us a fair idea of these. The following are the broad topics covered in SrI vEnkatAchala mAhAthmyam : 1) SrI varAha swami’s vaibhavam ; 2) the arrival of SrInivAsa to thiruvEnkatam ; 3) the divine marriage of SrInivAsa and padhmAvathith thAyAr ; 4) the glories of swAmi pushkariNI ; 5) the glories of other thIrthas in thirumalai and finally, 6) the qualities and greatness of vaishNavas .

In addition to these, emperumAnAr has cited various SlOkas from these texts during the time of establishing that the deity atop thiruvEnkatam is SrInivAsa and during the times of systematizing the ritualistic practices of the worship atop the holy hill. It is therefore, beyond doubt, that those who are devoted unto the lotus feet of Sri bhAshyakAra will relish these SlOkas.

By the grace of AchArya, let us enjoy the greatness of thirumalai through SrI vEnkatAchala mAhAthmyam in the upcoming posts.

We express our gratitude to SrimAn. KrishNa TEja MV for extending his help in understanding the telugu translation of this Sri vEnkatAchala mAhAthmyam.