Daylight, which gives some comfort, has gone and night time, which creates sorrow, has arrived. Entities such as cool wind have joined hands with night time to increase the sorrow. The person, who could save her from these entities, has not arrived yet. Hence the leading lady says that she will perish. During daytime, since the sensory organs can engage with various entities, it was possible to forget the separation from her beloved and survive. In the night time, however, since all entities subside, the sensory organs impel the mind to engage with the entity which has got separated (the leading man) and since it is the time for uniting, it becomes all the more difficult to survive.

sUriyan (sUrya), who is the lord of heat and who is unique, is ruling the world with his effulgence which is forever growing. Darkness, which has increasing levels of chillness, spread throughout this world in such a way that sun’s rule ended. Who can stop the northerly breeze which comes with the fragrance of thuLasi from my lord, which is the reason for exasperating my sorrow to a great extent? Who can protect and stop the bangles from slipping from my hands? These nights, which seem to extend to eons, are splitting me.

thanivaLar sengOl nadAvu – sUriyan, on his own, without the help of any secondary entity, emits an effulgence during day which is far greater than the combined light emitted by moon and thousands of stars in the night. Unlike darkness which makes sUriyan to set before letting out its dominance, sUriyan is splendorous without making anything else to disappear, through his radiance. Even when the moon and stars are there during daytime, sUriyan puts their brightness to shade through his radiance. Is there an event when something had shone even when his enemies were around? krishNa did that when dhuryOdhana et al were present, as brought out by the term kurUnprachchAdhayanaSriyA.

sengOl nadAvu – sUriyan had a sceptre which will not falter, just like manu and mandhAthA, who came in the clan of sUriyan.

thazhal vAy arasu aviya – he is the personification of heat. arasu – unique warrior. aviya – sUriyan was like a lamp which had got put out. Is there annihilation for sUriyan? The leading lady thought this way since it had not dawned yet. Just as thiruvAimozhi says oNsudarOn vArAdhoLiththAn (effulgent sUriyan hid himself without showing up), she too says this way.

pani vaLar sengOl iruL vIRRirundhadhu – night, which has chillness or dew as a manifestation of its rule, had spread throughout the world and made it as its kingdom. His is like another king taking over a land when a king, who rules it, disappears [sun has gone and night takes over]. The word pani can mean both dew and shivering. In line with this, it can be said that night was ruling the roost since everyone shivers when a new king takes over. It appeared that the space over which sUriyan was ruling was sufficient for darkness alone to reside.

vIRRirundhadhu – darkness sat on the kingdom as if there were no one to oppose it.

pani vaLar sengOl iruL vIRRirundhadhu – it was similar to one, who was residing in a small area, grew up to pervade everywhere.

thaN vAdai – how is it possible to split wind, which is invisible, into two? Her sorrow was in such abundance that even entities which are invisible became visible to her.

inivaLai kAppavar Ar – is it possible for her to unite with her beloved, so that her bangles could be  protected from the chill wind by destroying the wind?

enai UzhigaL IrvanavE – the nights which are like this, appear to be stretching to several eons. This implies that the world is not congruent with AzhwAr. 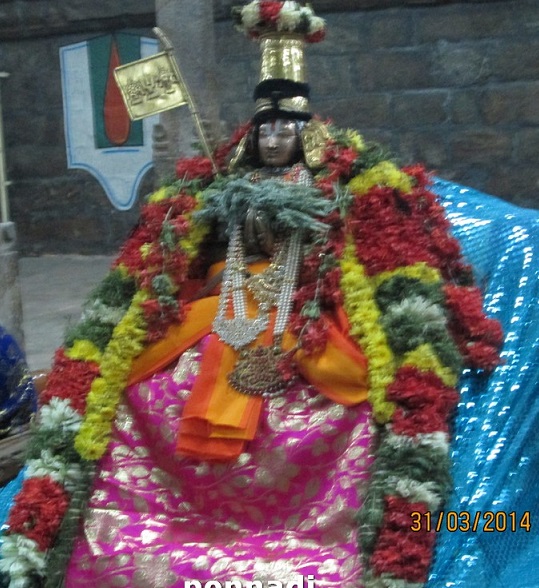 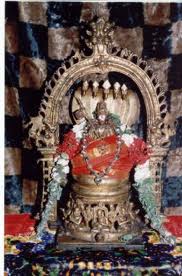