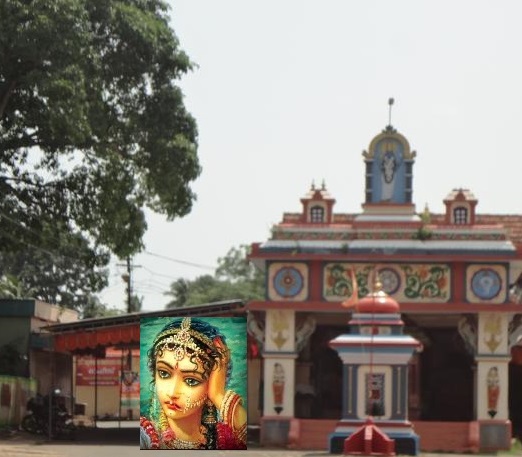 In this pAsuram, mAmunigaL is following AzhwAr’s pAsurams of going to thiruvallavAzh and being anguished in the enjoyable aspects in the garden surrounding the town itself and is mercifully explaining it.

How is that done? Even after AzhwAr entered thirukkudandhai with great anguish, his desire was not fulfilled. Hence he started from there and walked towards thiruvallavAzh with the strength given by the faith “his divine feet are the only means”, but could not reach there fully as he became weak and stayed in the garden surrounding the town, heard the loud chants of vEdham and the sounds of vaidhika rituals from the town, thought about the enjoyability in the honey, jasmine etc and became engaged in the anguish of not being able to enter and enjoy the same. AzhwAr reveals his emotions in the mood of a pirAtti who headed towards the abode of her nAyaka (consort) but being anguished having been unable to reach the destination, sharing her thoughts with her friends saying “When will I reach there, see him and sing his praises?” mAmunigaL mercifully explains this aspect which is explained in thiruvAimozhi 5.9 “mAnEy nOkku” starting with “mAnalaththAl“.

mARan – AzhwAr
mAnalaththAl – with great love
thiruvallavAzh pugappOy – mercifully started towards thiruvallavAzh dhivyadhESam but being unable to reach there
avvUr than arugil – in the garden surrounding the town
thAn iLaiththu vIzhNdhu – fell down due to weakness
mEl nalangi – became bewildered further (due to the restraining words of her friends)
thunbam uRRu – being anguished
sonna – mercifully spoke
solavu – divine words
kaRpAr thangaLukku – for those who can learn
pin – after learning them
piRa – births which are outside the scope of emperumAn’s divine feet
piRakka vENdA – will not be born.

With great love, AzhwAr mercifully started towards thiruvallavAzh dhivyadhESam but being unable to reach there, fell down due to weakness in the garden surrounding the town, became bewildered further, being anguished, mercifully spoke these divine words. For those who can learn them, after learning so, they will not be born in births which are outside the scope of emperumAn’s divine feet.

That is, as said in SrI rAmAyaNam kishkindhA kANdam 1.104 “padhma saugandhika vaham” (fragrance carrying lotuses), SrI rAmAyaNam kishkindhA kANdam 1.72 “padhma kEsara samsrushta:” (fragrance carrying lotus pollens), AzhwAr explains how the fragrance in the flowers and other enjoyable aspects, are being undesirable in separation and are being hurdles for his movement, as in:

Further, AzhwAr explains the vEdha and vaidhika celebrations, as in

Further, the celebrations in the town as said in “thol aruL maNNum viNNum thozha ninRa thirunagaram” (sarvESvaran descended to and stood in prosperous thiruvallavAzh to have the residents of both samsAram and paramapadham worship and enjoy his natural benefactorship) [10th pAsuram]. bhagavAn being revealed by vEdham and is worshipped by vaidhika rituals, they remind about him and torment AzhwAr. The celebrations in the town torment AzhwAr since AzhwAr is not able to participate in those.

Though, she prays to reach the divine feet and praises with his divine names, she will become weaker, as said in:

Due to these reasons, AzhwAr became bewildered and spoke these words with anguish. Even at this stage, AzhwAr’s faith was unshakable as he said “adi mEl sEmam koL then kurugUrch chatakOpan” (nammAzhwAr, the leader of AzhwArthirunagari, having firm faith in the form of intelligence of such sarvESvaran’s divine feet being the bestower of tranquillity) [11th pAsuram].

Twenty third pAsuram. He tells his heart that about the greatness of thiruvAdip pUram (divine  star of pUram in the month of Adi), the day that ANdAL incarnated, since there is no match for it.

Oh heart! Analyse and see if there is a day which will match thiruvAdippUram, the day when ANdAL incarnated as the divine daughter of periyAzhwAr. There be a match for this day only if there is a match for ANdAL nAchchiyAr!

ANdAL nAchchiyAr is the reincarnation of bhUmip pirAtti. Taking compassion on the people of the world, she let go of the enjoyment of emperumAn and incarnated in this world. On the other hand, AzhwArs were on this earth all along. Due to the causeless mercy of emperumAn, they obtained faultless knowledge and devotion and enjoyed emperumAn fully. No one can be considered as matching ANdAL who sacrificed her eminent position, for the sake of others. If the incomparable AzhwArs cannot be a match for ANdAL, who else can match her? For this reason, it can be said that there is no match for her star, pUram in the month of Adi.

Twenty fourth pAsuram. He mercifully tells his divine heart to celebrate ANdAL who is greater than the other AzhwArs.

ANdAL incarnated as the only heiress to the clan of AzhwArs. The term anju would mean both the number five and the quality of being fearful. Just as the king parikshit was the only heir to the panchapANdavas (five pANdavas), ANdAL is the only heiress to the clan of ten AzhwArs. This is the first meaning. That she is the only heiress to the AzhwArs who constantly fear as to what ill will befall emperumAn, is the second meaning. periyAzhwAr fully carried out mangALASAsanam (wishing emperumAn well) fully. The other AzhwArs were in paramabhakthi stage (being alive only if united with emperumAn) in their devotion. ANdAL carried out mangALASAsanam to emperumAn, just like periyAzhwAr and she was also very eminent, just like the other AzhwArs in her devotion. The meaning for the term pinjAyp pazhuththAL is that normally a plant will yield flower, then the unripened fruit and finally the ripened fruit. ANdAL was like thuLasi plant, which emits fragrance even as it sprouts out of earth; thus she was a ripened fruit at the beginning itself. In other words, she had eminent devotion towards emperumAn even at a very young age; she was five years old when she composed thiruppAvai. She wilted and melted in attaining emperumAn, while composing nAchchiyAr thirumozhi. Celebrate such ANdAL, always.