pErAli – the famous thiruvAli. Being the place where thirumangai AzhwAr was born, it is famous for emperumAn offering himself to AzhwAr for his enjoyment. I will go there and tell the people “Look at the way he has offered himself to me for my enjoyment, by looking at my form. See and decide for yourself as to for how many days he has starved me”. While she (parakAla nAyagi) is living in thiruvAli, is it apt to say that she will go to thiruvAli and abuse emperumAn? Even though she lives there, since it does not appear to exist for her, it does not appear to be close to her and hence she says that she will go to thiruvAli.

thaNkAl – Since he removes the difficulties of his devotees, like a cold breeze, the place became thaNkAl! I will go there and tell the people who have eyes which can see “Look at my form. Look at the way he has helped me to rid me of my difficulties”

naRaiyUr – is it not an abode which is famous for emperumAn’s giving up his independence and giving primacy to pirAtti (SrI mahAlakshmi)? I wil go there and tell the people “Look at the way he is listening to his pirAtti by looking at me, who is her belonging”

thiruppuliyUr – Just as it is mentioned in thiruvAimozhi 8-9-7 says “mellilaich chelva vaNkodippulga vIngiLandhAL kamugin“ (even insentient entities exchange affection as seen in the behaviour of betel leaf creeper hugging arecanut tree), it is the place where plants, men and women live united. I will go there and tell them “Look at the way I am united with my beloved” 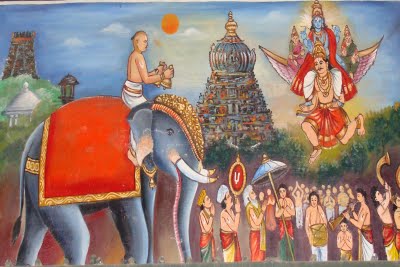 After periyAzhwAr established the supremacy of SrIman nArAyaNa in the court of pANdiya king, the king made AzhwAr to come around the town on an elephant [as a gesture of celebration]. To see this great sight of AzhwAr on the elephant, emperumAn appeared on his garuda vAhana (on garuda, his vehicle) along with his divine consorts. Being worried that emperumAn who is comfortable in SrIvaikuNtam, has come down to samsAram, periyAzhwAr sang pAsurams extolling emperumAn. These pAsurams are called as thiruppallANdu. It is periyAzhwAr’s unique greatness that he makes the sAmsAris [dwellers of materialistic realm] also to extol emperumAn, apart from singing them himself.

This simple translation has been carried out with the help of periyavAchchAn piLLai’s commentary for thiruppallANdu.

periyAzhwAr, also known as vishNuchiththar, who did not learn from a teacher but was bestowed with clear knowledge and devotion by thirumAL (emperumAn), went to the royal court of king SrIvallabha dhEvan in madhurai (South), in the assembly of learned people, with the intention of utilising the gift of gold coins for the betterment of emperumAn’s divine temple at SrIvillipuththUr and won that gift after establishing the supremacy of emperumAn by quoting from the vEdhas. Further, he married off his divine daughter, ANdAL to SrI ranganAtha and was revered by nithyasUris as the father-in-law of emperumAn. He was the greatest among the clan of brAhmaNas (those who learn and teach vEdhas). I salute such periyAzhwAr.

Oh heart! We will don the divine lotus-like feet of those who mention the name of SrIvillipuththUr which is surrounded by huge walls which shine like lightning, on our heads, like ornaments. By reminiscing and talking about the act of periyAzhwAr who went to the King’s court, cut-off the treasure of gold coins kept there through his arguments and made it fall on his hand, we saved ourselves from reaching lowly state.

The pANdiya king SrIvallabha dhEvan extolled saying “bhattarpirAn has come to establish for us the supremacy of supreme being”. Those in his court sounded the conch as a sign of victory. By providing necessary proof from vEdhas, periyAzhwAr [bhattar pirAn] established the supremacy of SrIman nArAyaNa. Such periyAzhwAr’s divine feet are our refuge.

First pAsuram. After seeing emperumAn with his beauty and other auspicious qualities in this samsAram, periyAzhwAr becomes fearful as to what misfortune will befall that emperumAn and sings paeans of praise on him such that until time lasts, emperumAn should remain great like this.

If you are interested in the wealth of service, come quickly, dig out soil for celebrating the uthsavam (festival) of emperumAn, be desirous of doing any service etc. We do not allow those who are interested only in food, to join us. For many generations, we have not desired anything other than service to emperumAn and are faultless. We are praising that emperumAn who carried out war with his bow against the demons who were living in lankA. You too join us in praising him.

Before you give up your bodies, if you are interested in joining us, give up the boundary (target) of enjoying only the AthmA, and join us. If you have the devotion to recite the divine ashtAkshara manthram (the divine manthram, of eight syllables, which extols SrIman nArAyaNa), through which both those ordinary people who live in villages and the knowledgeable people who live in towns would know well about emperumAn, join us in praising emperumAn.

Fifth pAsuram. In this, AzhwAr is inviting those who are interested in the opulence of this world.

You are in the group of those who are carrying out servitude to hrishIkESan who is the controller of the clans of demons and who annihilated the demons completely. You join our group, bow down to the divine feet of emperumAn, recite the thousand names of that emperumAn whole-heartedly, get rid of being in the cycle of births in which you pray to emperumAn for granting various benefits only to leave him later, and repeatedly praise that emperumAn.

Sixth pAsuram. After AzhwAr invites each of the three groups of people in this way, each group comes and joins him. Of these, those who were invited by the vAzhAtpattu pAuram (third pAsuram), who are desirous of carrying out service to emperumAn, narrate their qualities and activities; AzhwAr accepts them.

For seven generations, my father and I, his father and his father et al, have been carrying out kainkaryam (service) as mentioned in vEdhas. For the one who took the form of a beautiful narasimha (lion head and human body) and destroyed his enemy hiraNya, we will sing praises to remove any ennui that he would have felt while carrying out that activity, for the sake of his devotee.

Seventh pAsuram. AzhwAr accepts the kaivalyArthis (those who enjoy their AthmAs), who were earlier referred to in the fourth pAsuram Edu nilaththil, and who come to him, narrating their qualities.

We have come to carry out kainkaryam for all times to come, including succeeding generations, after we have been identified (on our bodies) with the divine symbol of chakkaraththAzhwAr (divine disc), whose reddish splendour is far brighter than fire. We praise that emperumAn who is holding aloft chakkraththAzhwAr who was spun to make the demon bANAsuran to bleed from his thousand shoulders, like a flood.

Eighth pAsuram. AzhwAr accepts the aiSwaryArthis (those who desire wealth), who were mentioned in the fifth pAsuram aNdakkulaththukku and who come, agreeing to sing praises on emperumAn.

[The aiSwaryArthi says] I will praise emperumAn who offers me the pure, tasty prasAdham (offering made to emperumAn as part of worship) which is seen amidst ghee, confidential service, the thAmbUlam (blend of betel leaf, arecanut and lime), ornament for neck, ornament kuNdalam (ear drops) for the ears, unique sandalwood paste which is a good fit for the body, who is capable of creating a good mind in me and who is having as his flag, garuda, the enemy of snakes with hoods.

Ninth pAsuram AzhwAr is praising emperumAn along with those who are devotees and desirous of carrying out service to emperumAn, and who were invited in the third pAsuram of vAzhAtpattu and who joined him in sixth pAsuram, endhai thandhai.

We will be  your servitors, wearing the divine dress which has been removed from your divine waist after you have worn it, eating the remnants of the prasAdham (offering of food made to emperumAn) after you have eaten, donning the divine thuLasi garland which has been removed after you have worn it. We will sing on the day of thiruvONam (the divine star of emperumAn) songs of praise on you, who are lying on the bed of AdhiSEshan who has well expanded hoods and who carries out all the tasks which you set out, in all directions.

Tenth pAsuram. In this AzhwAr is joining with the kaivalya nishtars (those who are engaged in enjoying AthmAs) whom he had invited in Edu nilaththil pAsuram and who joined him in thIyil poliginRa pAsuram.

Our lord! The day that we gave you in writing that we have become your servitors, all the descendents in our clan got relieved from kaivalyam and got uplifted. Oh emperumAn who incarnated on an auspicious day, who broke the bow in the festival conducted by kamsan in madhurai (North) and who jumped onto the five spread hoods of the snake kALiyan! All of us will gather together and praise you.

Eleventh pAsuram. In this, AzhwAr joins with the aiSwaryArthis who he invited in the aNdakkulam pAsuram and who joined him in neyyidai pAsuram.

Oh the consort of mahAlakshmi! Just like selva nambi, who is the leader of those who are residing at thirukkOttiyUr which is like a jewel for the entire world, who is without any fault and who is great with the honour “I am servitor to you alone”, adiyEn (this servitor) too has been your servitor for a very long time. Oh one who purifies us all with your basic nature, form, qualities and wealth! I will worship you by meditating on your ashtAkshara manthra (manthra with eight syllables) and reciting your thousand names.

Twelfth pAsuram. In the end, Azhwar, by the way of stating the benefit for those who learn this prabandham, says that those who extol emperumAn with deep affection, will get engaged with emperumAn and until time exists, will have the fortune of carrying out mangaLAsASanam (praising emperumAn auspiciously), and brings the prabandham to an end.

This prabandham has been composed by vishNuchiththan (periyAzhwAr), born in SrIvillippuththUr, on emperumAn, who is the most pure, who resides in the exalted paramapadham (SrIvaikuNtam) and who rules over his bow SArngam, with the desire “emperumAn should always remain with auspiciousness”. Those who recite this prabandham with the thought that good times have occurred for singing this prabandham, will meditate on ashtAksharam and sing pallANdu (long live emperumAn!) till time exists, going around the supreme entity SrIman nArAyaNa, repeatedly.