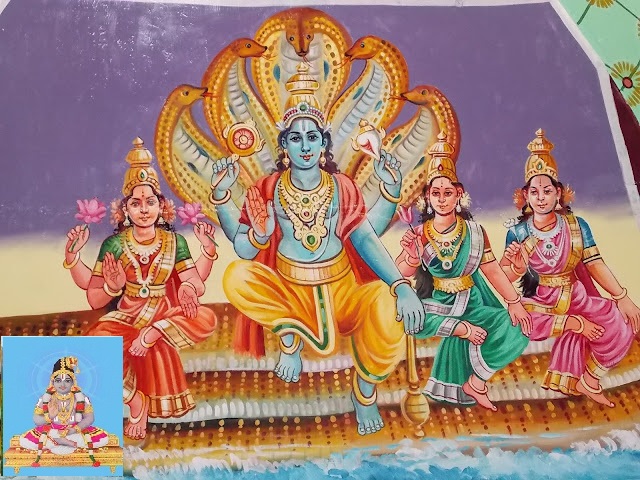 bhagavAn also clears all obstacles to steadfast devotion unto him with his man-lion form. He is the one who took the divine and magnificent form of half-man and half-lion (nArasimha नरसिंह) out of his own free will in order to ward off fear from the mind of bhagavAn’s devotee (prahlAdha) and to grant his wishes.

Etymology: The one who sports the form of man and lion out of his own free will in order to ward off fears for his dear devotees is called ‘nArasimhavapu:’.

Even though bhagavAn sports such a horrendous form of half man and half lion, which are mutually dissonant, unseen or unheard of before, yet he is ‘SrImAn’ (full of wealth) [the wealth referred to in this context is the beauty in his divine form]. He is still with the most charming and divine body, with both saundharyam (beauty of individual limbs) and lAvaNyam (collective beauty of the whole body). In this incarnation of nArasimha, we see the fine arrangement of a divine body pure in nature, which when seen otherwise as either just a man or just a lion would have caused aversion in the minds of people. Just by sporting such a divine form, he saved the worlds from all evils. As it is said in the vishNu dharmam, “Having taken the form of man-lion with terrific fangs, with which he would ward off all fears from the minds of the gods, he saved the worlds…”

Etymology: Even though sporting a body with mutually opposing form and nature, he is ‘SrImAn’ since he is the most charming of all.

Furthermore, the featuring of the marked grandeur and beauty with such divine forms by bhagavAn is illustrated with this divine name ‘kESava:’. He sports the most auspicious, smooth, charming, long and curly hair locks. The praise of his hair locks results in this name ‘kESava’ (kESa + va:) as per the rule of grammar ‘कॆशात् वॊ अन्यतरस्याम्’.

Etymology: Since he sports the most charming long and curly hair, he is called
‘kESava’.

Since he features an identity distinct to himself, different from other entities, he is called ‘purushOththama:’ – the best among souls. He is the supreme among all the sentient entities.

The word ‘purusha’ in this context refers to the sentient entity, and distinguishes bhagavAn from the insentient ‘prakruthi’ or nature – both manifest and non-manifest. The comparative degree ‘uth’ refers to the nature of being greater. This degree in fact refers to the liberated souls, which are better than the souls bound in this samsAra. Even greater are the souls who are ever liberated and are never born in this samsAra from time immemorial. Such ever-liberated souls like anantha, garuda, vishvaksEna et al are present in SrIvaikuNtam forever and have never touched the samsAra. They are referred with an even higher degree ‘uth-thAra’. But bhagavAn is distinct from even such ever liberated souls and is superior to them. He is totally against abhorrent qualities and faults, and is by nature all-pervading, all-bearing, and the master of all entities. Thus he is naturally the best among all the other entities, and is called ‘purusha-uththama’.

This very superlative state of bhagavAn is celebrated by the scriptures as the highest
secret, as illustrated below:

“There are two kinds of purushas (entities) in this world. One class is called ‘kshara’, and refers to the perishable prakruthi or nature, and the other ‘akshara’ – referring to the imperishable individual souls. There is a third entity –purushOththama – who is also called ‘paramAthmA’.

All these quotes and more show the absolute supremacy of bhagavAn over the other lower entities called nature and individual souls.

Even in this case, the absolute distinction between the enjoyer (individual soul), object of enjoyment (nature) and the controller of both (bhagavAn) is very clear and pronounced. Thus, the adhvaitha school of thought that says ‘The supreme lord himself is bound in this material creation due to his ignorance’ stands refuted. If the transformations of such supreme brahman are declared in the vEdhas and his being bound in this samsAra propounded, then the scriptural statements that show the distinction between brahman and the liberated souls, creation (obtaining name and form) of nature and individual souls by the supreme brahman,  and their destruction (reaching the original state of primordial nature and souls without faculties) would all be contradictory.

Etymology: The one who is distinct from all sentient entities such as bounded, liberated and ever liberated souls is called ‘purushOththama:’.

Although bhagavAn does not expect any external support for anything at any point of time, yet he takes care of all the entities in this creation without contempt. He knows and conducts all entities in their respective forms and positions, just as a soul considers the body as its own and conducts it. Thus, he is called ‘sarva:’ – the one who pervades all entities as their soul and knows them. The word ‘sarathi’ सरति (moves) is suffixed with the adjunct ‘van’ वन् as per the grammar rules. Thus, in this context, the name means ‘the one who moves with his His limbs’ (सरति अवयवान्). Also, in this context, the word ‘sarathi’ or ‘movement’ is interpreted as ‘knowing’ by
intellect.

The mahAbhAratha itself says thus in this regard: “he is the creator and destroyer of all sentient and insentient entities. He is the knower of all such entities at all times, and thus he is called by the divine name ‘sarva’”.

Verily this scope of pervasiveness itself is called by an alias ‘sarva-sAmAnAdhikaraNya-nibandhanam’ (सर्वसामानाधिकरण्यनिबन्धनम्) – the rule of all-congruence (congruence of all entities having ‘bhagavAn’ as their soul).

The scriptures start explaining this by saying ‘by whom all of these are strung together…’ and proceeds to say thus in the vEdhas: “he is verily all of this (He is the soul of all these entities)”.

The bhagavath-gIthA also says “You pervade all of these entities. Thus you are verily the embodiment of everything”.

Etymology: The one who pervades in all of the sentient and insentient bodies is called as ‘sarva:’.

bhagavAn is called ‘Sarva:’ – the slayer, since he wards off all inauspiciousness from the entities which are his body. The root ‘Sru’ (शृ) is taken to mean slaying (शृ हिंसायाम्). The same grammatical rule as in the previous name applies here as well, resulting in the ‘va:’ adjunct.

Etymology: The one who removes all sadness from this world which is verily his
body is called ‘Sarva:’.

Since he bestows all auspiciousness among his devotees, he is called ‘Siva:’ – the giver of auspiciousness. The root ‘SIng’ (शीङ्) is generally used in the meaning of ‘auspiciousness’. Just as in other words such as ‘sarva’, ‘nigruSva’ et al, this also has a ‘van’ adjunct, resulting in the name ‘Siva:’.

Etymology: He is called ‘Siva:’ because he bestows auspiciousness upon his
devotees.

The rule ‘स्थॊ-णुः’ results in the suffix ‘Nu’ being added to the root ‘stha’, giving the name ‘sthANu’ – the firm one. In this context, the name is interpreted to mean ‘the one who graces and blesses his devotees firmly’.

The touch of bhagavAn is not just a slayer of all sins akin to the various expiatory rights. Nor is it just a granter of limited fruits akin to the various oblations – such as kArIri, chithrA, darSapUrNa, et al, or even the demigods. It simply does not stop at granting the desired fruit alone to the devotee. It is not restricted by any strong obstacle. It never falters. It does not step back either. Instead, irrespective of how strong the obstacles are, the touch of bhagavAn simply wards off all such inauspiciousness and grants all the desired fruits in abundance to the devotee. Even after this, it does not stop, and continues granting all auspiciousness continuously.

Etymology: Even after slaying all inauspiciousness and bestowing all auspiciousness
upon his His devotees, the one who never rests himself is called as ‘sthANu’.

Also, since he is the most desirable object for all the creatures born in this creation, and since all the creatures attain him at the end, he is called ‘bhUthAdhi:’. Per the grammatical rule ‘उपसर्गॆ घॊः किः’, the ‘ki’ adjunct has been suffixed to the letter ‘dhA’ in the verb ‘upAdhIyathE’ उपादीयतॆ (granted), resulting in this name. The same rule is also applicable in other names such as ‘sarvAdhi:’ सर्वादिः (100), ‘nidhi:’ निधिः (30), et al.

The scriptures elaborate on this further in statements such as these:

Etymology: Since bhagavAn is the most desirable as the end goal of attainment for all creatures – with a beautiful form, and since all such creatures indeed attain him at the end, he is called ‘bhUthAdhi:’.

Furthermore, he is the nidhi:-avyaya: – the unlimited wealth. He is the true unlimited wealth, since he is ever available for use, just as some protected wealth safeguarded for some exigency. This is shown in the scriptural statement “him, who is hidden within like a golden treasure-trove” (chAndhOgya upanishath).

Although utilized continuously in all possible ways by all the creatures for their very
subsistence, he does not diminish even by a smidgen. Thus, he is described as
‘avyaya:’ – that which does not diminish.

Here, the name ‘avyaya:’ is not independent. Rather, it is just an adjective to the
name ‘nidhi:’. Otherwise, there would be an occurrence of repetition of that name
(avyaya:).

Etymology: The one who is ever available like a treasure-trove in exigencies is called
‘nidhi:’. Although being enjoyed by the creatures endlessly, he does not diminish a
least bit. Since such ‘nidhi’ is non-diminishing, this adjective ‘avyaya:’ is used to
describe him. Thus, ‘nidhi:-avyaya:’ is said to be a single name to that supreme one.