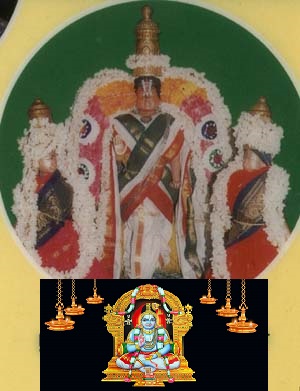 In the second decad, previously, AzhwAr mercifully explained the aptness of the natural relative sarvESvaran being the goal and highlighted the following aspects with the desire to serve him while he is mercifully resting:

In the previous decad, AzhwAr said “All entities other than emperumAn are incidental relatives; he is the only natural relative”; if he is the natural relative, engagement with such relative cannot be avoided. While AzhwAr went to thiruppuLingudi where such natural relative is mercifully reclining to engage in all manners with him, he did not enquire about AzhwAr’s well-being; he did not mercifully shower his cool glance and he did not speak a few consoling words; due to not seeing any of these, AzhwAr became distressed; even that distress will be eliminated  if he presents himself. Something bigger than that occurred too – AzhwAr started fearing “emperumAn is reclining in the same posture to strain his own divine form; what will happen to him?” Previously in thiruvAimozhi 5.8 “ArAvamudhE“, AzhwAr became upset thinking “he is not eliminating my sorrow”; here AzhwAr is becoming upset thinking “he is neither eliminating my sorrow nor his sorrow”. Hence with such sorrow as said in thiruvAimozhi 8.3.5 “kodiyAr mAdak kOLUr agaththum puLingudiyum, madiyAdhinnE” (thirukkOLUr which is having mansions with abundance of flags and in thiruppuLingudi), AzhwAr says with great sorrow “You should mercifully shower your cool glance to eliminate my sorrow; you should mercifully place your divine feet on my head; you should mercifully show the divine presence of your highness and divine consorts; there cannot be anything less than the benefit that was received by sanjaya”. mahAbhAratham udhyOga parvam 49 “yathra krushNau cha krushNA cha sathyabhAmA cha bhAminI …” (where krishNa, arjuna, dhraupadhi and the beautiful sathyabhAmA are (intimately) present, even abhimanyu or nakula/sahadhEva have not even gone – sanjaya (after seeing it) says to dhrudhrAshtra), kaNNan emperumAn showed that divine vision to him which cannot be seen by one’s own sons) – generally when mother and father are present together, it is not that the children cannot be there; but they [krishNa, sathyabAmA, arjuna, dhraupadhi] were present in such a manner that even the children cannot enter; in such state, emperumAn invited me inside and showed that divine sight. [AzhwAr says] In this manner you should show me the divine sight of your highness and your divine consorts being together; being joyful in granting my such divine sight, you should mercifully walk around a few steps; I wish to see your gentle smile which occurred due to seeing favourable person [me]; you should mercifully speak to me”; in this manner AzhwAr speaks to emperumAn in privacy after closing the doors, revealing his heart and urging “I should get these immediately”. In the previous decad, AzhwAr enjoyed prApthi (goal – bhagavAn); in this decad, AzhwAr is desiring the prApthi palam (subsequent activity after attaining the goal).