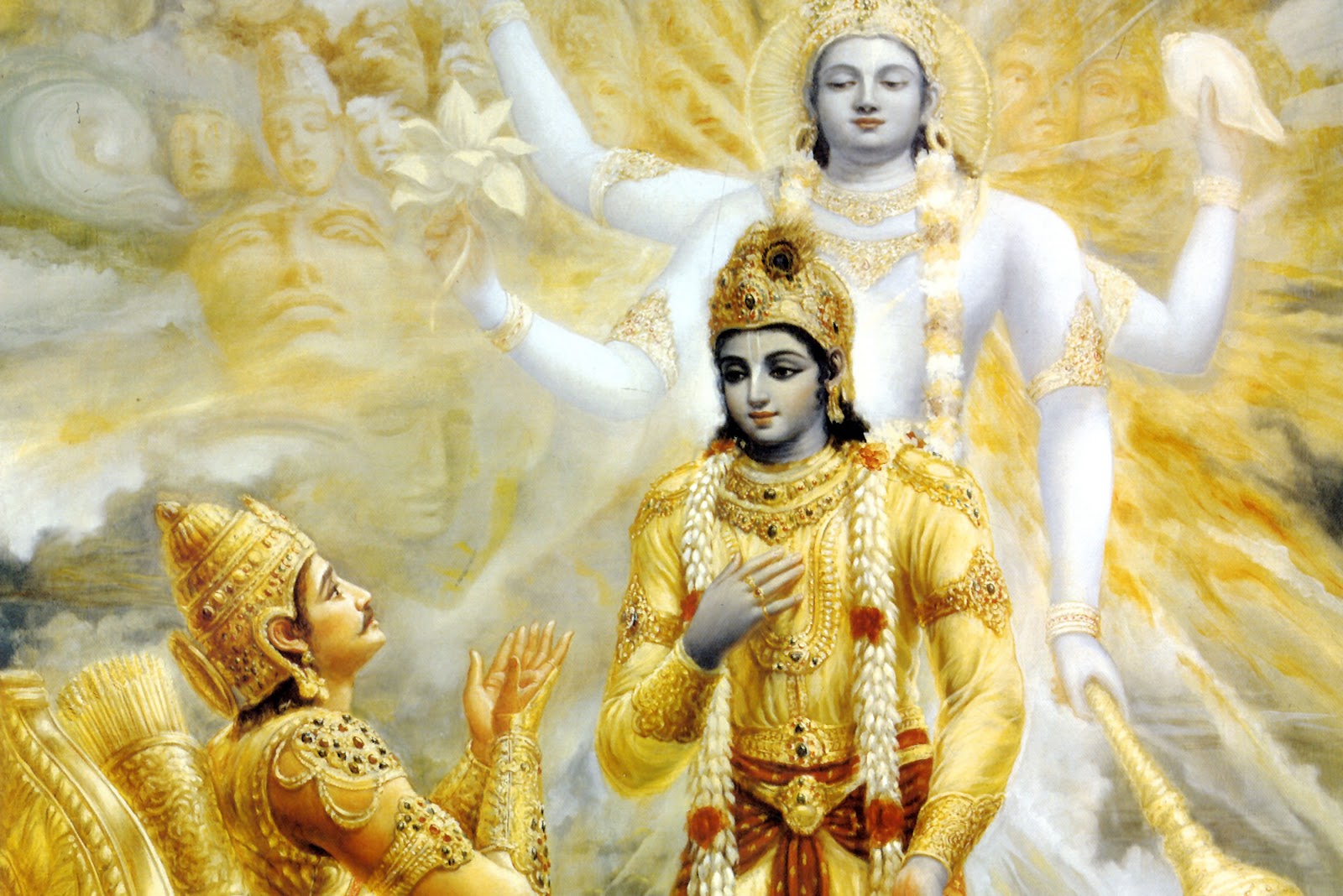 AzhwAr mercifully describes the efforts put in by the paththiyuzhavan (farmer emperumAn) in this as well as the next pAsuram. In this pAsuram, he melts while describing how emperumAn transforms himself for the sake of his followers.

pAl pon pasuppu kAr nAngu vaNNamum – having the four colours of white, red, green and black
nigazhndhAy – glittered (in the four yugas) [yuga is a period of time]
iruvaraiyum – the two demons madhu and kaitabha
vIya – to be destroyed
igazhndhAy – you removed
sEnApathiyAy – being the protector of arjuna’s army
manam – having the desire (to enable dhraupadhi to plait her hair)
pOr – the mahAbhAratha war
mudikkum vagai – the way by which it will be ended
sinappOr suvEdhanai – arjuna, who has white horse as his vehicle and who fought furiously in the war
pugazhndhAy – you praised

nigazhndhAy pAl pon pasuppu kAr vaNNam nAngum – SAsthras say that emperumAn changes his dark complexion (which normally is similar to rain bearing clouds), in each yuga (a period of time) based on the quality of the people living in that yuga. Since it is through his divine form that he develops bhakthi (devotion) among his followers, as brought by nammAzhwAr’s saying “kAdhal kadal puraiya viLaiviththa kAramarmEni” (emperumAn’s form is such that it creates affection in his devotees equalling the great ocean), emperumAn involves in changing his complexion in line with the qualities of his followers.

niganzhdhAy pAl vaNNam – As mentioned in the pramANam “kruthE SuklaSchadhurbhAhu” people living in krutha yugam (the first of four yugams) are full of sathva guNa (purely good qualities), they will have pure hearts and would desire white complexion in emperumAn too. Thus emperumAn displays white complexion for them. The word white refers not only to the complexion of the divine form but also to the qualities.

nigazhndhAy pon vaNNam – As mentioned in the pramANam “thrEthAyAm raktha varNOsau”, since people in thrEthA yugam have rajO guNa (quality of passion and aggressiveness) mixed with sathva guNa, emperumAn displays a complexion of red mixed with white, a hue of golden colour.

nigazhndhAy pasuppu vaNNam – As mentioned in the pramANam “dhvAparE SyAma:” people in dhvApara yugam have rajasthamO guNa (mixture of rajas and thamas qualities; we have already seen rajas  quality; thamas gives rise to laziness, ignorance, bewilderment etc in a person) along with sathva guNa. emperumAn thus displays a combination of white, red and black, a kind of greenish tinge similar to that of algae.

nigazhndhAy kAr vaNNam – As seen in the pramANam “kalau krishNam thvishA krishNam” since no one attains emperumAn in kali yuga, he displays his natural colour of black clouds.

Thus, apart from displaying different complexions at different ages in time based on the qualities of the people in the different ages, AzhwAr next mentions about the efforts that emperumAn puts in, to remove the enemies of his followers, thus paving the way for the irrigation of bhakthi in his followers. ….

igazhndhAy iruvariyum vIya – you took a vow to destroy two demons madhu and kaitabha, who were enemies of your follower brahmA, from whom they stole vEdhas (sacred texts). Alternatively, this can be construed to refer to the egoistic kings who were on the two sides of pANdavas and kauravas when the two sides engaged in the mahAbhAratha war and how emperumAn, as krishNa, destroyed all such egoistic kings.

AzhwAr now cites another example of how emperumAn transforms himself in order to complete the task for his followers ….

pugazhndhAY sinappOr suvEthanai – you praised arjuna, who has the chariot drawn by white coloured horses as his vehicle and who can fight furiously.

pugazhndhAy – not paying heed to arjuna’s addressing him (emperumAn) as “hE krishNa, hE yAdhava” (Oh krishNa! Oh cowherd!), you called him as “paranthapa” (one who singes his enemies in the battlefield), “anagha” (one who is faultless) and in different such ways. Isn’t it amazing that one who is praised constantly by vEdhas, rishis, AzhwArs et al, praises another entity!

sinappOr suvEthanai – (praising) arjuna, who is a warrior in the battlefield and not a coward who runs away from it. Among the many names for arjuna is suvEthan (SvEtha). This refers to his chariot being drawn by white coloured horses.

sEnApathiyAy – as the charioteer for arjuna, it was krishNa who was for all practical purposes, the head of pANdavas’ army. He conducted many amazing activities during the war and brought it to a close. Didn’t sanjaya (charioteer of King dhrutharAshtra and who was giving constant updates on the happenings in the battlefield to the King) say in SrI bhagavath gIthA SlOka 18-78 “yathra yOgESvara: krishNa: yathra pArthO dhanurdhara: thathra SrIr vijayObhUthir… ”, (where krishNa and where arjuna with his bow are present, wealth and victory will go only there) giving prominence to krishNa by referring to him first and only then, arjuna!  While referring to pANdavas, it used to be said “krishNASraya: krishNa balA: krishNa nAthAScha pANdavA:” (for the pANdavas, krishNa is the final goal to be attained, krishNa is their strength and krishNa is their Lord). Is it required to be said that he is the head of their army!

What is the purpose behind praising arjuna and engaging him in the war? ….

manappOr mudikkum vagai – in order to bring to an end, the war that he had vowed to fight in his divine mind. The meaning implied is that he wanted to bring the war to an end to enable dhraupadhi to plait her dishevelled hair, to enable her husband yudhishtra to ascend the throne, and to destroy dhuryOdhana and others  who had insulted her. But why carry out so much for her? Did she not call out to him when she was being disrobed by dhuryOdhana’s brother duSSASana “gOvindhEthi yathA grandhath krishNa mAm dhUravAsiNam I ruNam pravaruththamiva mE hrydhayAn nApasarppathy II” (dhraupadhi’s calling out to me when I was in a far-off land has not left my heart, just as interest keeps building up on a loan taken).  Thus, to ensure that the war is brought to a close, he praised arjuna. The war had to be brought to an end for the sake of dharupadhi who had surrendered to him earlier. All his activities are centred around his followers.

We will take up the 25th pAsuram next.