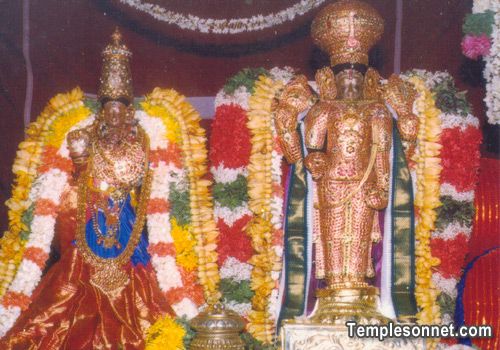 In the ninth pAsuram, AzhwAr says “While I rejected him, emperumAn forcefully gave the shadow of his divine feet, to remove all my fatigue”.

Subsequently, AzhwAr says “sarvESvaran who is having contrary entities which are related to him and attractive entities, and who is having no match for his benefactorship, mercifully bestowed the shadow of his divine feet to me”

enakku – being distinguished for me
en – the cause for my sustenance
appan – father
Ay – being
iguL – the step mother, who is having the femininity which is opposite to such masculinity
Ay – being
ennaip peRRavaL Ay – being my distinguished, real mother who is unlike the step mother who just raises the child
pon appan – manifesting his attractive nature which resembles gold
maNi appan – manifesting his radiant nature resembling a precious gem (which is greater than gold in radiance and great worth)
muththu appan – manifesting the coolness resembling a pearl (which is greater than precious gem in the coolness)
en appan um – the benefactor for me (in many ways)
Ay – being
minna – to shine
pon – golden
madhiL – by fort
sUzh – surrounded
thiruviNNagar – in thiruviNNagar
sErndha – living
appan – being the lord of all

(for such benefactorship towards all)
than – for him
oppAr il – having no match
appan – great benefactor
than – his
thAL – divine feet’s
nizhal – shadow
thandhanan – mercifully bestowed.

emperumAn being distinguished for me, being my father who is the cause for my sustenance, being my step mother, who is having the femininity which is opposite to such masculinity, being my distinguished, real mother who is unlike the step mother who just raises the child, manifesting his attractive nature which resembles gold, manifesting his radiant nature resembling a precious gem, manifesting the coolness resembling a pearl, being the benefactor for me, is living in thiruviNNagar which is surrounded by shining golden fort; being the lord of all there, having no match for him, the great benefactor mercifully bestowed me the shadow of his divine feet.

AzhwAr mentions about the first time that he received the grace from emperumAn which was the cause for his benefits such as these.

aruL purindha sindhai – the divine mind focussed on mercy
adiyAr mEl vaiththu – keeping on us, his followers
poruL therindhu – considering us as entities when we weren’t
kANguRRa appOdhu – during that time when he showered his grace on us
iruL thirundhu – getting rid of the darkness of ignorance
nOkkinEn – I analysed the nature of jIvAthmA and paramAthmA
nOkki – after analysing
oN kamalam adhu – those divine feet [of emperumAn] which are like beautiful lotus flowers
ninaindhEn – meditated on them (as the goal to be attained)
Orndhu – analysing (that there is no refuge for me other than these divine feet)
ennaiyum – the AthmA
angu – at those divine feet
OkkinEn – I offered

arul purindha sindhai – as mentioned in SrI bhagavath gIthA 16-19 “thAnaham dhvishatha: krUrAn samsArEshu narAdhamAn kshipAmi ajasram aSubAn AsurIshvEva yOnishu” (I push those who hate me, those who are cruel, those who are the lowliest among humans and those who have inauspicious qualities, always into samsAram (materialistic realm) and that too in the clan of demons), instead of pushing me into such a clan, he showers his grace on me through his divine mind as said in SrI bhagavath gIthA 10-10 “dhadhAmi bhudhdhiyOgam tham yEna mAmupayANthi thE” (I give them intelligence with which they can reach me).

aruL purindha sindhai – he has such a divine mind that he cannot sustain himself without showering grace. This implies that the faults present in the chEthanas are hidden from him by his grace.

adiyAr mEl vaiththu – he showers such grace on his followers like us. Showering his grace without looking at anything other than the criterion that we are his followers.  Here, the term adiyAr (followers) can be construed to refer to followers in general or to the AzhwAr who was standing in the corridor [of mrigaNdu maharishi in thirukkOvalUr] along with the other two AzhwArs when emperumAn started crowding around them with his consort [he could be referring to the first three AzhwArs as adiyAr].

adiyAr mEl vaiththu – emperumAn cannot exist without showering his grace on his followers. Hence, he showers the grace so that he does not lose himself; AzhwAr terms this as causeless mercy.

poruL therindhu kANguRRa appOdhu – at that point of time when he showered his grace on us, so that we would know things as they are. Alternatively, this can be construed as: that point of time when emperumAn considered them too as entities and showered his grace. nammAzhwAr too has mercifully stated in thiruvAimozhi 5-7-3 “poruL allAdha ennaip poruLAkki adimai koNdAy” (you recognised me as a sentient entity when I was lying as an insentient being and made me a servitor).

Since he became qualified to receive his grace …..

iruL thirindhu nOkkinEn – I found that I lost my ignorance which was a hurdle for me to get knowledge. Once I saw this ….

nOkki – I received the true knowledge that emperumAn is the Lord and I am a servitor.  Hence …

ninaindhEn adhoN kamalam – I thought of your divine feet which are like lotus flower. I realised that I have to attain only your divine feet. I ascertained that this is my goal.

Orndhu – analysing that I, who am subservient to emperumAn, have no connection with myself and that I am the possession of emperumAn. Feeling sad that he had mistaken emperumAn’s possession (the soul) as his own.

ennaiyum angu OkkinEn – I submitted myself to his divine feet. I ascertained that he is the means [to attain him].

We shall take up the 60th pAsuram next.