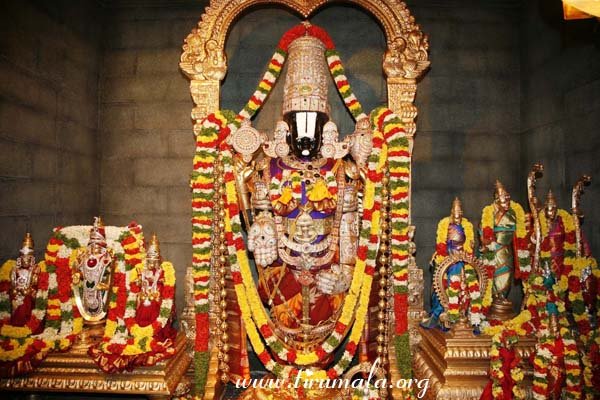 In the previous pAsuram it was mentioned that emperumAn stands for all. In this pAsuram his bias towards his followers is mentioned.

senRadhu ilangai mEl – this says that unlike rAvaNa who sent [his uncle] mArIcha as a deceptive deer and made rAma to travel a long distance behind it in order to capture sIthAppirAtti in a cunning way, [SrIrAma] in keeping with his valour, went directly to lankA, waged a war and destroyed rAvaNa.

senRadhu ialangai mEl sevvE – instead of through his sankalpam (vow), he went directly to lankA walking with his divine feet. As mentioned in SrI rAmAyaNam yudhdha kANdam 1-29 “abhiyAthA” (one who fights in the forefront), SrI rAma went in the forefront of his army and fought.

ilangai mEl – he invaded fearlessly on lankA, a place which entities such as indhra et al would be scared even to mention by name.

than sIRRaththAl konRadhu irAvaNanai – with his anger, he destroyed the heads of rAvana, who, as mentioned in SrI rAmAyaNam yudhdha kANdam “praharthA cha” (one who attacks) was protected by various boons.

than sIRRaththAl – one who has anger under his control. He sought anger and destroyed rAvaNa. He could carry out tasks with his sankalpam (vow) only if he were with the nature of paramporuL (supreme entity). In rAmAvathAram (incarnation as SrI rAma), since he had truly assumed the characteristics of a human being, he destroyed rAvaNa with his anger alone.

kURungAl – if one were to mention the characteristics of emperumAn’s

ninRadhuvum vEy Ongu thaN sAral vEngadmE – in order to help those who had missed out during his various ages of incarnation so that they do not lose out, the place where he came down to is thirumalai (thiruvEngadam) with its cool, hilly sides which remove the tiredness of those who climb the hills, and with well grown tall bamboo shoots.

ninRadhuvum vEngadamE – He has come to thirumalai so that he can remove the enemies of his followers who had come after the times of his incarnations. Just as he redeemed sIthAppirAtti who was captured by rAvaNa, he is remaining at thirumalali in order to redeem the AthmAs (souls) which have been stolen by chEthanas who claimed them as their own.

viNNavar tham thol pugazhAn  – this mentions the place that he had dwelled in, before coming to thirumalai. He is one who has natural greatness, and is praised by the nithyasUris in SrIvaikuNtam. We can also construe this as one who has long established qualities, praised by nithyasUris. Or, since the context is SrI rAmAyaNam, we can consider this as the praise of brahmA et al who said, as in SrI rAmAyaNam yudhdha kANdam 117-27 “sIthA lakshmi: bhavAn vishNu:” (sIthA is SrI mahAlakshmi and you are vishNu).

vandhu – he came as the one who seeks to offer himself, to thirumalai.

We shall take up the 26th pAsuram next.