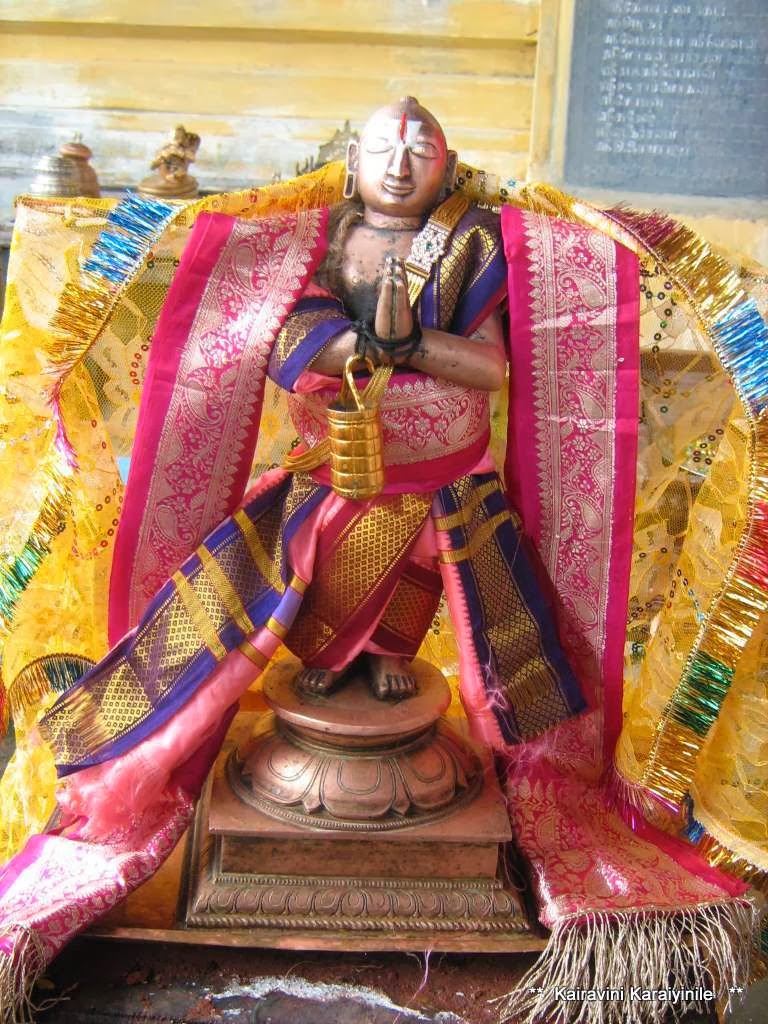 The thaniyan for thirumAlai has been composed by thiruvarangapperumAL araiyar, a disciple of ALavandhAr and one of the five AchAryas (teachers) of rAmAnujar.

mEyththa – emperumAn who grazed the cattle

uRRa – one who has deep devotion

sIr – and with auspicious qualities

vEndA – is not needed

thiruvarangapperumAL araiyar instructs his mind to keep talking about thoNdaradippodi AzhwAr all the time. “Why should I?” asks the mind. araiyar says that this AzhwAr, who has composed thirumAlai,  is bestowed with auspicious qualities. And what he is doing with these qualities? He is completely devoted to the two exalted feet of thiruvarangan. And who is thiruvarangan? He takes supreme pleasure in looking after cattle, when he assumed the incarnation of krishNa. Do not look for any other benefit, the araiyar tells his mind.

maRRonRum vENdA manamE – what is thiruvarangapperumAL araiyar indicating by the word “maRRonRu”? Is it other dEvathAs (celestial beings) such as Siva, brahma, indhra? No, he is not referring to these people. araiyar tells his mind not to speak even about the five states of emperumAn (para, vyUha, vibhava, antharyAmi and archai). Another meaning is: do not recite the names of emperumAn (thirunAma sankIrththanam – singing the revered names of emperumAn). He tells his mind not to consider what is likeable and what is good. Here “likeable” refers to carrying out kainkaryam (service) to bhagavAn and “good” refers to reciting bhagavAn’s revered names. Reciting bhagavAn’s names and carrying out kainkaryam to bhagavAn are considered as being in prathama parva nishtai (being in the primary stage of devotion) while doing the same to bhagavAn’s devotee (bhAgavatha) is considered as being in charama parva nishtai (being in ultimate stage of devotion). araiyar, by inference, is in the ultimate stage of devotion.

manamE – the mind is the cause for both attachment (to worldly matters) and liberation from the same. araiyar tells his mind to discard being attached and enjoy being liberated. How do I do this, asks his mind….

mathiLarangar – thiruvarangar who is residing inside the temple whose compound wall was built by thirumangai AzhwAr.

kazhal iNaik kIzh – here the reference to the thiruvadi (exalted feet) of thiruvarangan is to be taken as representative of his thirumEni (entire physical form).

kazhal iNaik kIzh uRRa thirumAlai pAdum – thoNdaradippodi AzhwAr devotedly engages with the exalted feet of emperumAn, who, as krishNa, had taken care of cattle while grazing with the same feet that the AzhwAr is now worshipping. AzhwAr decides to decorate such exalted feet b y stringing a garland of hymns (thirumAlai), similar to what nammAzhwAr had said in thiruvAimozhi 2.4.11 (adi sUttal Agum andhAmam – the exalted feet should be decorated with beautiful flowers).

eppOdhum pEsu – Oh! my mind! Keep talking about him at all times. Mind asks “why should I talk about him all the time?”. This is because it is said in prapanchasAram, “gurOrnAma sadhA japEth” – keep reciting guru’s (AchAryan’s or teacher’s) name all the time.

We shall move on to the vyAkhyAnam of periyavAchchAn piLLai in the next article.