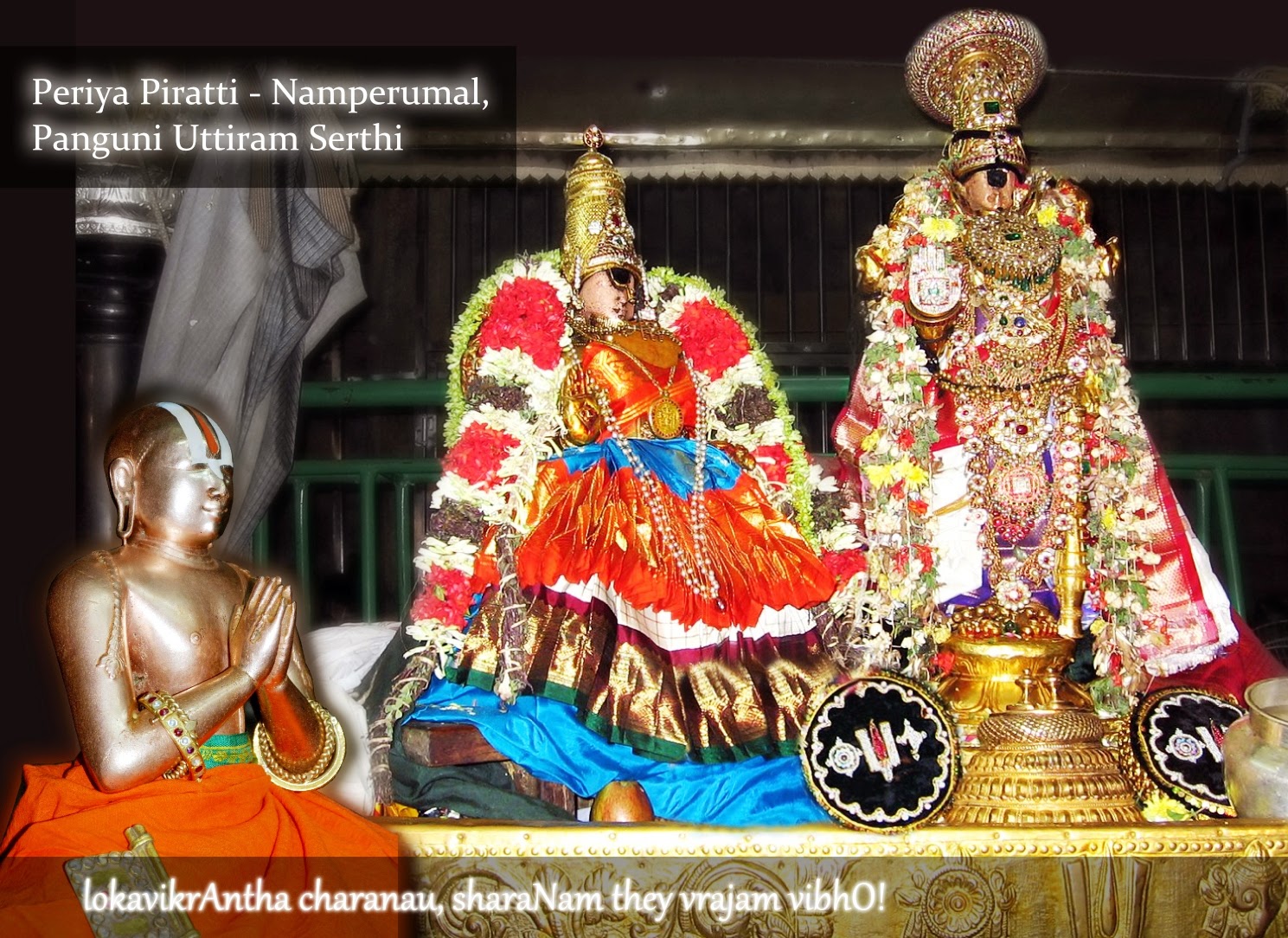 In the first chUrNai, bhagavadh SrI rAmAnuja surrenders to pirAtti, requesting her to grant him the desire in the path (of attaining mOksham through surrendering to bhagavAn) as well as deep faith that bhagavAn would grant him mOksham. Subsequently pirAtti grants him his wishes. Then he approaches bhagavAn, the Lord of both nithya vibhUthi (SrIvaikuNtam) and leelA vibhUthi (samsAram or materialistic world). He recounts the unmatched qualities of bhagavAn and with pirAtti playing the role of purushakArabhUthai (recommending person) he performs SaraNAgathi (act of surrendering) to bhagavAn. Then he lists all that he has given up at the time of SaraNAgathi, emphasising that bhagavAn himself would be all these entities to him. He also tenders apology for carrying out SaraNAgathi after going the wrong way in all the previous births and thus far in this birth. He also quotes the words of preceptors when they carried out SaraNAgathi as these are always dear to bhagavAn. When bhagavAn is willing to grant mOksham after carrying out SaraNAgathi once, why did SrI rAmAnuja do it multiple times? He did that because of the strong craving (Arththi) that he had for reaching SrIvaikuNtam and also because he wasn’t sure whether bhagavAn would be gladdened more by hearing the verses of preceptors when they carried out SaraNAgathi or hearing his own words. With this, SrI rAmAnuja completes the equivalent of first part of dhvaya mahAmanthram (the part dealing with the actual surrendering of jIvAthmA to bhagavAn). Now he has to start the second part which deals with carrying out kainkaryam (rendering service) to bhagavAn and pirAtti together. But before stating that desire (of carrying out kainkaryam), we should first get rid of the undesirables that we have in plenty with us. SrI rAmAnuja states these now in chUrNai 10 to 12. This is equivalent to the meaning of nama: in dhvaya mahAmanthram. These undesirables are present in us on account of karma (deeds, both good and bad, from previous births), agyAnam (ignorance) and dhEha sambhandham (connection with bodily entities during repeated births in samsAram). Starting with dhEhAthmAbhimAnam (mistaking the body for AthmA, and acting accordingly), ending with svabhOgthruthva budhdhi (thinking that doing service to bhagavAn and pirAtti is to please oneself and not to please bhagavAn), and including all the faults in between, SrI rAmAnuja lists these undesirables in chUrNai 10 and requests bhagavAn to rid him of all these faults.  periyavAchchAn piLLai raises a query here: AzhwArs gave prominence to agyAna (ignorance) as main fault which led to karma (both good and bad deeds) and repeated births in samsAram whereas rAmAnuja gave prominence to karma, leading to agyAna and repeated births. Why did AzhwArs give prominence to agyAna and SrI rAmAnuja to karma? periyavAchchAn piLLai reasons out that for AzhwArs, lack of knowledge was the main reason for their troubles based on their own experience, until bhagavAn removed their agyAnam and gave them true knowledge. In the case of AchAryas, including SrI rAmAnuja, being born in families where the elders had good gyAnam (knowledge) and anushtAnam (practices), there was no dearth of knowledge and they found that karma was the one which led to agyAnam and to repeated births. Moreover, adhvaithis (those who believe in only one entity unlike vishthAdhvaithis who believe in three, viz. chith, achith and ISwaran) maintained that true knowledge would lead to mOksham and SrI rAmAnuja wanted to have clear distinction from adhvaithis‘ argument and hence put forth karma as the primary fault in jIvAthmA.

Let us first look at the chUrNai:

manOvAkkAyai: – manas – mind; vAk – speech; kAyam – body. One of these three faculties    is required for carrying out any activity (karma). These are used for either reaching bhagavAn or for losing bhagavAn. Lord krishNa in bhagavadh gIthA says that mind is one’s friend as well as an enemy. What is mentioned for mind is true for the other two, too.

akruthyakaraNa – akruthya – not to be done; karaNa – doing. I have committed offence by doing what has been forbidden by SAsthras (religious treatises)

kruthyAkaraNa – kruthya – to be done; akaraNa – not doing; I have also committed offence by not doing what SAsthras have ordained to do.

ananthApachArAn – unlimited offences. It is not the sum total of the offences that is mentioned here, but each of the types listed above is unlimited in quantity.

ArabdhakAryAn – Arabdha – that which has started; kAryAn – deeds of karma. The reference is to the portion of karma taken from “sanchitha karma” (the big bundle of karma that has been earned by jIvAthmA during all its previous births). The jIvAthmA is sent with this small portion of karma to this world at the beginning of each birth, to be spent during its lifetime.

anArabdhakAryAn – anArabdha – that which has not started; kAryAn – deeds of karma. The remaining portion of karma which is yet to be exhausted.

kruthAn kriyamANAn karishyamANAmScha – kruthAn – what has been done in the past; kriyamANAn – what is being done now; karishyamANAn – what will be done in future; cha – and. All these refer to the deeds in this birth, taking place in all three times – viz past, present and future.

sarvAn – everything. What has been listed above is only a portion of the offences committed. Please include all the rest too, in this, says SrI rAmAnuja.

aSEshatha: kshamasva – aSEshatha: – without leaving anything; kshamasva – forgive. SrI rAmAnuja seeks pardon from bhagavAn for all the transgressions that he has committed as mentioned above.

SAsthra says that the extent of punishment to a person who has the capability to perform, but still does not perform the deeds that it has specified, is double of a person who is not capable. It expects capable persons to lead by example and hence levies stringent punishment if its order is violated.

What  is bhagavadhapachAram? – in various temples, the properties of the temples such as lands, buildings, jewels etc have been donated by rulers and rich people over many centuries. If a person takes the produce from the temple’s land or bhagavAn‘s jewels for his own use or if he gives these to someone else  (known or unknown to him) or if he borrows/begs from a person who has committed the offence listed above, it is called as bhagavadhapachAram. Also, talking ill of bhagavAn when he has taken many incarnations by saying that he was also a human being like ourselves; or estimating the value of bhagavAn‘s archA thirumEni  (the vigraha or idol of bhagavAn) or by enquiring about the material from which the idol has been made;  or by equating bhagavAn with dhEvathAntharams (other dhEvathAs such as brahmA, rudran, indran et al) or considering bhagavAn’s wealth as one’s own, are all bhagavadhapachAram. An example of a person who committed bhagavadhapachAram is SiSupAlan who kept talking ill of Lord krishNa.

What is bhAgavathApachAram? – arguing with SrI vaishNavas (followers of SrIman nArAyaNa); or thinking lowly of the birth and practices of other SrI vaishNavas; talking low or making fun of people who are handicapped either physically or mentally. An example of a person who committed bhAgavathapachAram is rAvaNan who committed offence on SrI SItA.

What is asahyApachAram? – unable to control jealousy when bhagavAn‘s or bhAgavatha’s good qualities are highlighted and banging one’s head or cutting one’s tongue, unable to bear such virtues; or hating a person because he is a SrI vaishNava. An example of such a person is hiraNyakashyap who could not bear his son prahlAdh reciting SrIman nArAyaNa’s names and asked his guards to put his own son in fire.