Starting with (the pAsuram of ) ‘piLLAn nanjeeyar [upadhEsa raththina mAlai – 39]’, as he (maNavALa mAmunigaL) wanted to, he showed about those who authored vyAkyAnams for dhrAvida (thamizh) vEdham that is thiruvAimozhi, and about the count lengths of those vyAkyAnams; and now regarding the other prabandhams that are related parts of thiruvAimozhi, he is divining who all authored them, and that periyavAchchAn piLLai divined vyAkyAnams for all of them. 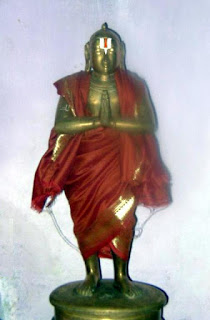 theriya vyAkkiyaigaL seyvAl – As he considers only the growth of others as his being, since he authored the vyAkyAnam for understanding clearly –

As said in ‘senchol kavi [thiruvAimozhi 10.7.1]’ (poem that is of beautiful words), and ‘sevikkiniya senchol [thiruvAimozhi 10.6.11]’ (beautiful words that are sweet to the ears), and ‘sencholAl eduththa dheiva nanmAlai [periya thirumozhi 1.1.10]’ (divined a divine garland using beautiful words), and ‘senthamizh [periya thirumozhi 2.8.2]’ (beautiful thamizh (pAsurams)), starting from the time of hearing it, they are of unbounded sweetness, due to being thamizh language they are being very soft ones, and are very easy;

still, it is difficult to determine the meanings, isn’t it?

Having such difficulties and greatness (arumai perumai), the meanings of aruLichcheyal (dhivya prabandhams), ‘Ariyargatku ippOdhu’ – for the AchAryas after (periya)AchchAn piLLai , or, ippOdhu – also – after he divined the vyAkyAnams, or, for those living at the same time as him, since he divined (earlier) at that time, it is being possible for latter ones to divine/explain them.

As said in ‘ariyadhu eLidhAgum [iraNdAm thiruvanthAdhi – 22]’ (what is difficult would become easy), due to the grace of periyavAchchAn piLLai, ‘aruLichcheyaLAyththu aRindhu’ – that is, by his extraordinary vyAkyAnams, for meanings that are very hard to know, it is now possible for others to understand, enjoy it themselves, and divine as advice to others.

Compared to other AchAryas, isn’t this the distinguishing greatness of him (periyavAchchAn piLLai)?

In the earlier two chUrNais, SrI rAmAnuja had mentioned about his karma (past deeds) and agyAna (ignorance), the basis for karma. In this, the 12th, chUrNai, he mentions about the basis of his agyAna, which is his dhEhasambhandham (connection with physical body) and requests bhagavAn to enable him to cross prakruthi (primordial matter) which is responsible for dhEham (body). While he had requested bhagavAn earlier (in the last two chUrNais) to forgive him of his misdeeds and to destroy the deeds, here he asks bhagavAn to help him cross over prakruthi. Why did he not ask for destroying his dhEhasambhandham here? periyavAchchAn piLLai, the vyAkhyAthA (commentator), mentions that the misdeeds were like thoughts in bhagavAn’s mind and he could remove or destroy such thoughts at his pleasure. But samsAram (materialistic realm) or prakruthi is permanent and can not be destroyed. Hence he requests bhagavAn to help him cross it. It is not his intention to destroy the Lord’s leelA vibhUthi (realm for his play and pastime). Could he not ask for getting separated or liberated from it? periyavAchchAn piLLai says that one can ask for being separated or liberated from samsAram if one knows that the AthmA and body are two separate entities. If one doesn’t know that the two are different (because of dhEmAthmAbhimAnam, mistaking body for AthmA) how could he ask for being separated or liberated from it? It is like water mixing so well with milk that it would be impossible to separate one from the other. In bhagavadh gIthA, krishNa says that this prakruthi is like an illusion and it is difficult to cross it without his assistance. Hence SrI rAmAnuja requests bhagavAn to enable him to cross it over.

madhIya – mine; these karmas have not come because of someone else’s creation or as a prasAdh (gift) from bhagavAn, but have been accumulated by me over many, many births in this samsAram.

What does this do?

Instead of thinking of bhagavAn like this, this body of ours, resulting from karmas, makes us think that

The basis for such ignorance is of course dhEhasambhandham (connection with the body for eons).

viparItha gyAna jananIm – viparItha – false or opposite; gyAna – knowledge; jananIm – birth. What is false about our knowledge? Thinking that this body of ours is AthmA (dhEhAbhimAnam). Thus the body hides not only bhagavAn but our own svarUpam (true nature). In other words, each person is a King in his own land and he need not bother about bhagavAn or accept him as his lord and master.

dhEha indhriyathvEna bhOgyathvEna sUkshma rUpENa chAvasthithAm – dhEha idhriyathvEna – of body and five senses; bhOgyathvEna – enjoying for pleasure; sUkshma – subtle; rUpENa – form; cha – and; avasthithAm – state of being. The body,in its subtle form, given by primordial matter (prakruthi), with the help of five senses, enjoys all that is there in the world for its own pleasure. This is the handiwork of prakruthi in 4 different ways as mentioned above.

dhaivIm – for the playful act of bhagavAn. prakruthi is there for the sport and pastime of bhagavAn and it causes much damage to our svarUpam due to our karma and agyAna.

mAyAm – mUla prakruthi (primordial matter); this body of ours exhibits wondrous quality. What is wondrous about it? It hides bhagavAn himself and AthmA. The body, which is composed of five elements (cosmos, wind, fire, water and earth), taken from priomordial matter, is controlled by these elements to such an extent that the body behaves in all the fashions mentioned above (forgetting the nature of both AthmA and bhagavAn and enjoying everything for its own pleasures)

mAm thAraya – mAm – me; thAraya – cross over. Caught in such a vicious world, rAmAnuja pleads with bhagavAn to rescue him and to help him in crossing over this samsAram. bhagavAn asks rAmAnuja as to what he has done for him to help him. rAmAnuja says that in all these births, he has done lot of wrongdoings, has been a dhEhAthmAbhimAni (one who has mistaken body for AthmA), has gone after the five senses to enjoy pleasures of life etc, but now has realised that he is fully a servitor to bhagavAn.

dhAsabhUtham – dhAsa – servant. bhUtham – existing. rAmAnuja says to bhagavAn, “I exist as your servant”.  bhagavAn further says that this is an ordinary feature. “Is there any other deed that you have done for me to help you”?

SaraNAgathOsmi thavAsmi dhAsa ithi vakthAram – SaraNagatham – surrender; asmi – I am. thava – yours; asmi – I am. dhAsa – servant. vakthAram – by mouth; thAraya – rescue or cross over; adiyEn has surrendered unto you; I am yours; I am your servant, says rAmAnuja. I now know that you are the path to attain mOksha or liberation, you are the fruit of my surrendering, and you are my master.

vakthAram mAm – I have said so, not from my heart, but from my lips.

thAraya – Please consider this act of my mine and help me cross this prakruthi, says bhagavath SrI rAmAnuja.

We shall now move onto the 13th chUrNai