Would not whatever we had given up, as mentioned in the previous chUrNai, be a great loss to us, asks periyavAchchAn piLLai. He responds that they are not, as bhagavAn himself is all these things to us. 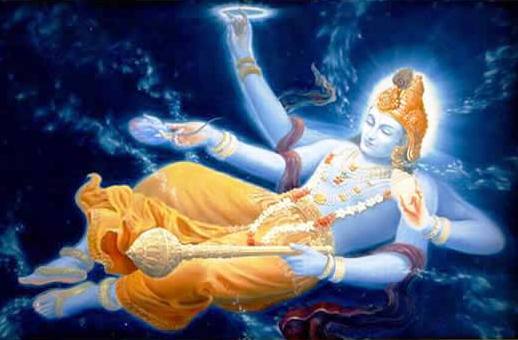 thvamEva mAthA cha pithA thvamEva – thvam – you; Eva -only; mAthA – mother and pithA – father. cha – and. Unlike a father who starts wishing and doing good for the child after the child is born, the mother starts protecting and loving the child right from the time that the child is conceived in her womb. Hence precedence is given to the mother. bhagavAn is also the father as it is the father who is equally responsible for the formation of the child. In our sampradhAyam (traditional beliefs), the entire creation is carried out by bhagavAn and not by pirAtti, and hence bhagavAn acts both as mother and father.

thvamEva bandhuScha – you are like relatives. Relatives are those who ensure that the person does not go the wrong way in life, control him and guide him in the correct path. bhagavAn is also the antharAthmA (pervading within the AthmA). Thus he guides the person always and acts similar to the relatives.

gurusthvamEva – you are like AchArya (teacher). The sound “gu” in guru means ‘darkness’ and the sound “ru” means ‘negates’. Thus a guru negates darkness – in other words he enlightens. bhagavAn removes ignorance in this samsAram (materialistic world) and grants mOksham (liberation) and hence he is the guru.  In our sampradhAyam, he is the first and primary AchAryan, as mentioned in our guruparamparai (lineage of AchAryas). He provides all the implements and aids for us to get interested in reaching him – he gave vEdhas (fountainhead of knowledge, divided into rig, yajur, sAma and atharva), SAsthra (religious treatise), purANa (ancient literature such as vishNu purANam, gAruda purAnam etc), ithihAsa (epics such as SrI rAmAyaNam and mahAbhAratham), created AzhwArs and AchAryas to explain what he had told or done in vEdha, SAsthra, purANa and ithihAsa, showed his exalted thirumEni (physical form as seen in archA mUrthi, as evidenced in various dhivyadhEsams) –  he does all these things so that we move away from the worldly pleasures in this samsAram and take the initial steps towards him . As seen earlier, he does not create desire in us for us to reach him, but develops the desire once we show the initial spark. He is indeed a great teacher, guru.

thvamEva vidhyA – you are the knowledge preached to us. How can he be “knowledge”? He provides the vEdhas which provide knowledge. Since various parts of vEdhas and vEdhAnthas (upanidhaths, the end part of vEdhas) are under his control and he is the entity explained or propounded in these, he is indeed the knowledge.

dhraviNam thvamEva – you are the wealth. Here wealth does not indicate only monetary wealth but all the entities which are enjoyed – for example, garland, sandal paste, food stuff, property etc. Not only the perceptible entities, but even the imperceptible entities such as parabhakthi, paragyAnam etc (which we had seen in chUrNai 5) are called as wealth. His exalted feet are the path for us to reach him and these are considered wealth.

thvamEva sarvam – whatever has been left unsaid is also you.

mama dhEva dhEva – Having given up everything to hold on to you, you are my lord and master. You are the lord of nithyasUris and mukthAthmAs in SrIvaikuNtam and you are my lord too.

Let us now move on to chUrNai 8.