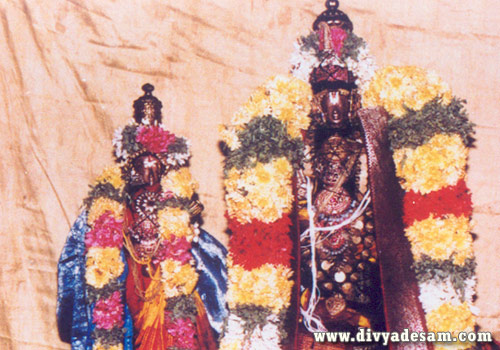 After sending messages through messengers, the message which was given to the messengers went deep into AzhwAr’s heart, and AzhwAr started visualising those words; due to overwhelming experience, he thought that emperumAn was standing in front of him and speaking to him; emperumAn realised such special state of AzhwAr in his divine heart, being unable to bear AzhwAr’s suffering, he came and showed his face to AzhwAr and took her [AzhwAr in feminine mood] away; he sends AthivAhikars (those who can travel through space) to bring some of his devotees to him; he sends garudAzhwAr to bring some of his devotees to him; he himself comes for some as said in varAha charama SlOkam “nayAmi” (I will carry); in that manner, he arrived and covered parakAla nAyaki with the top portion of his aththavALam (upper cloth) and carried her with him; her divine mother who was guarding her from close, observed that she was missing from the cot; she then speaks about the nature of parakAla nAyaki, how she cannot survive without her daughter, her greatness which makes the other person feel for her in this way and her loss and calls out for her daughter.

What does it mean by emperumAn carrying parakAla nAyaki away? What is the inner meaning for that?

While she was having experience in his mind, it was so clear that it felt like external experience for her. varAha charama SlOkam is explained here: