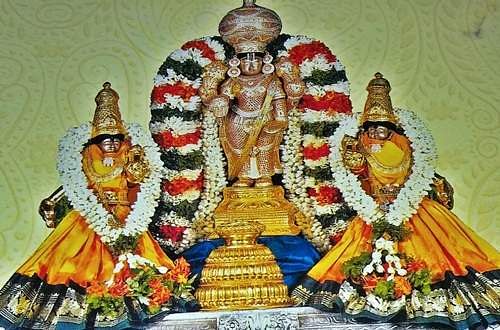 While everyone was focussed on self-interest, thirumangai AzhwAr said “Be totally dependent on sarvESvaran and surrender unto sIrAma viNNagar” and instructed others; unlike that, while he analysed himself, he observed that sarvESvaran, who is mercifully residing in thiruvAli, himself pursued [AzhwAr] and arrived [at thiruvAli];  AzhwAr said “You, who are the ultimate goal, have entered in my heart though I have not prayed for the same; you have created such craving in me that I cannot live without you; in such a setting, I cannot survive if you leave me and hence I won’t let you leave; there is none, more than I, who needs your mercy; hence you should mercifully accept my nithya kainkaryam” and prayed for kainkaryam at the divine feet of emperumAn who is the apt goal; since he did not get that eternal kainkaryam immediately, being unable to remain patient, he manifests his urge and concludes the decad.