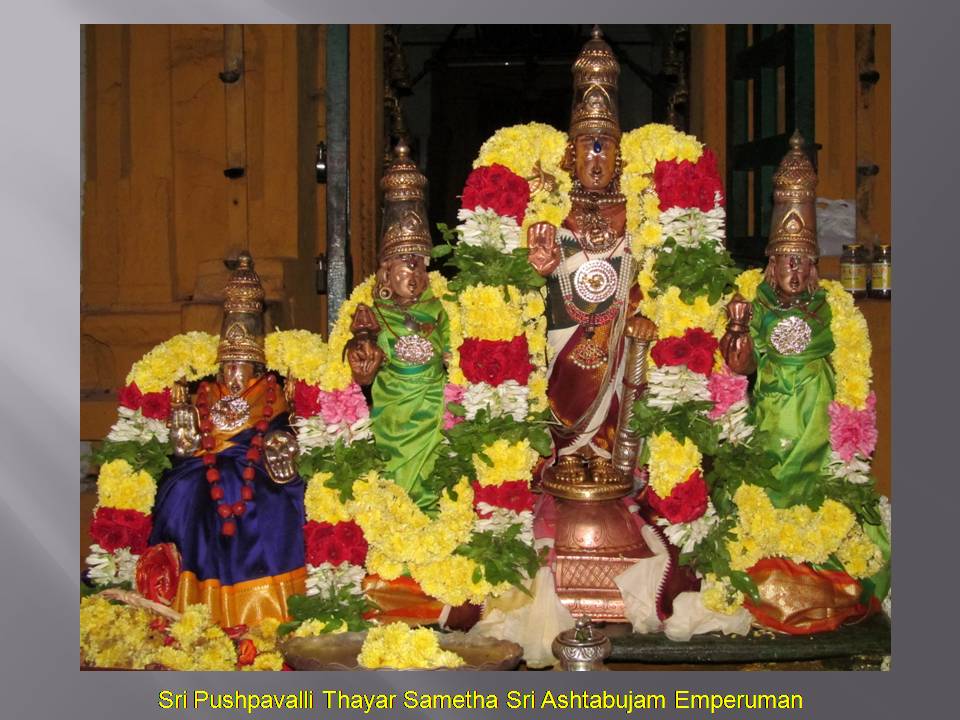 This place [thiru-attabuyakaram] is where he stands, being unable to say as in SrI rAmAyaNam AraNya kANdam 10.9 “hrIrEshAhi mamAthulA” (I am feeling immensely ashamed) [this is when the sages complained to SrI rAma about their difficulties where he felt embarassed for not having helped them till then]; he will not be the refuge if he is not remaining in that manner.

parakAla nAyaki, without knowing what to do and what not to do, was standing, sitting, falling down, rising and being bewildered; seeing this, her divine mother called out for him highlighting his nature; also she herself spoke about him; by these acts, she acquired a little bit of clarity; emperumAn’s qualities were deeply filled in her heart. She became pacified thinking that emperumAn would come for the rescue of those who are in danger. Subsequently, meditating upon thiruvattabuyakara nAyanAr (emperumAn in this dhivyadhESam), fully visualising him, due to that overwhelming visualisation, she saw emperumAn in her mind as if seeing him directly as in “uruvu veLippAdu” (visualisation of emperumAn in close proximity as if he is really present); she says that she started speaking to him and he responded; the relatives who were there said “Are you bewildered? What shall we say about this?” parakAla nAyaki says “I asked thiruvattabuyakaraththu nAyanAr in this manner. He responded to me” to her mother and friends, and explains those words to them.