In the middle ten – Not stopping with thinking about it in his mind as for spending time, he fainted out of overwhelming love, and he nurtured the longing for seeing Him with his eyes, and fainted as he could not see Him in person as he expected, and as others talked about her being fainted like this, the mother saying those words about her daughter – this is how these pAsurams were set.

In the third ten – Seeing her state, her friend wished to get her to calm down, and hence asked her about what had happened, and since this was about the story of what happened with Him, she sustained herself and talked to her friend about it; then as there were no questions or answers, her suffering due to separation reared its head; she got involved in sending messengers. Since He did not show up after that, anger due to love-quarrel reared its head. If this had extended over time like it did for nammAzhvAr, then He might have come and showed Himself. Due to this AzhvAr’s delicateness, anger left in the middle itself, and the state of desperation came back as before. Even in this state she could sustain herself only if He came and showed Himself. Since that was not there, parama-Bhakthi that was born for nammAzhvAr in “muniyE nAnmuganE [thiruvAimozhi – 10.10]”, was born for thirumangai AzhvAr at this point; so expressing His ananyagathithvam (not having any other refuge than Him), and expressing his having blemishes and so having no good deed in Him, in this pAsuram, AzhwAr wails, “Oh! You who are having love, are not showing up even in this stage!”.

Since for thirumangai AzhvAr in the place of supremacy it is avathAram (incarnation), he is calling emperumAn based on incarnations of rAma and krishNa, and the archAvathAram (deity form). 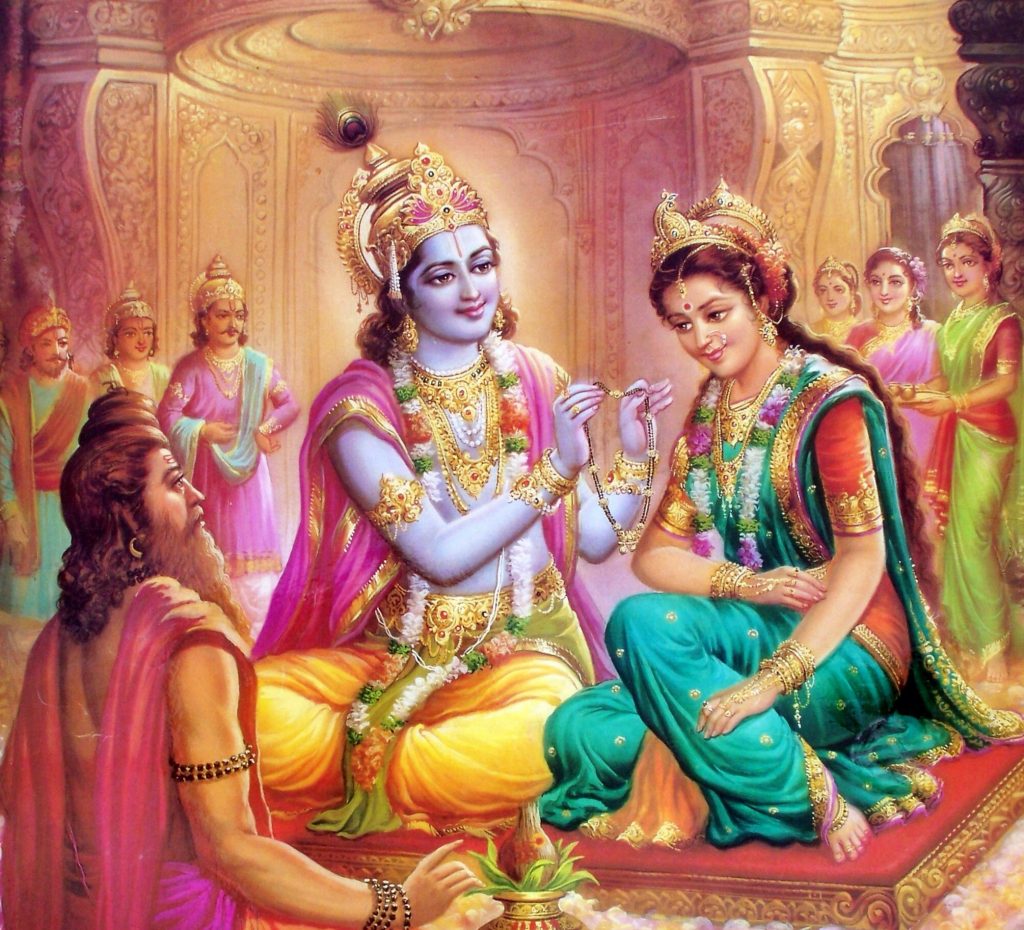 nappinnai thinking about only krishNan

Ayar kulam magaLukku – for nappinnai pirAtti who incarnated as the best woman for the clan of cowherds,

anRu – once upon a time,

alai kadalai kadaindhu – Him who churned the milky ocean having waves splashing,

adaiththa ammAn thannai – Him, the lord who constructed bridge (in salty ocean),

kodum silai vAy – Him who in the grave bow

saram thurandhu – set the arrows and shot them

kulam kaLaindhu venRAnai – and destroyed the clan of asuras and won,

thOLinAnai – Him who is having shoulders

kunRu eduththa – that lifted the gOvardhana mountain as an umbrella,

nediyAnai – Him, the perumAL who is the most eminent that others,

nAy adiyEn – I who am a lowly one like a dog,

anRu etc. – He is talked about as showing up for His lovers. First, AzhvAr divines about His helping nappinnaip pirAtti.

anRu – At that time also a danger happened like today. Considering the beauty of nappinnaip pirAtti, deciding that her groom should be the one who is having the ability to protect her, and hence it was established that winning the bulls as the condition for giving her daughter in marriage; so before krishNan came for that, the shivering of nappinnai is the shivering with the thought that she might become related to someone else.

Ayar kula magaLukku – For nappinnai who was born in noble clan; thinking that it would not be possible to get nappinnai unless born in an equally noble clan, is the reason why krishNa had come and took birth as nandhagOpar’s son.

araiyan thannai – Equivalent to destroying enemies and getting back a kingdom and ruling it, is His winning the bulls that were in His way to get nappinnai, and getting the delightful nappinnai. Like how He removed the hurdles and helped Her get Him, should He not remove the hurdles for me and come to me – parakAla nAyaki asks.

alai kadal etc. – He is divining about the way perumAL helped SrIdhEvi and seethAp pirAttis. To get periya pirAtti He churned the ocean. To solve the loneliness of seethAp pirAtti, He bridged across the ocean. Giving nectar to dhEvas, giving their places back in rAmAvathAram are all side effects only. ALavandhAr knowing well this inner thought of emperumAn, had divined “yadharThamamBhoDhiramanThyabhanDhi [sthOthra rathnam – 37]” (Only to get Her did emperumAn churn the ocean; only to get Her did He construct bridge across the ocean).

ammAn thannai – If You do not come here and show yourself to me who is longing for You, not only would You lose your name as a big lover of ones who love you, you would also lose the supremacy attributed to you for giving, as a side-effect, the nectar to and removing the poverty of dhEvas who became poor due to the curse of sage dhurvAsa and came to you asking for help, and giving back their places when brahmA et al lost their places of living due to rAvaNan – she says.

arakkar kOnai mALa – For the death of rAvaNan the head of rAkShasas whose living, using the boons they obtained, was troubling for others.

kodunjilai – using the arrows from bow that is having greatness as said in “dheeptha pAvaka sankASai: [SrI rAmAyaNam – yudhDha KANdam – 16-23]” (bows are like burning fire), and “svarga mArga praBhAvanam [SrI rAmAyaNam – kishkindhA KANdam – 17-8]” (bow that would send one to paramapadham).

kulam kaLaindhu – Making the clan of rAkshasas to be destroyed. What about viBheeshaNAzhvAn? Is he not a rAkShasa?

Based on viBheeshaNa’s own thoughts, and based on rAvaNan calling him as a destroyer of own family (and so does not belong), and based on the thoughts of SrI rAma, SrI viBheeshaNAzhvAn belongs to the clan of IkShvAhu, that is SrI rAma’s clan.

While only rAvaNan did the mistake, it was such a heavy one that his whole clan got destroyed. Like how if one is loving towards emperumAn, then its benefit reaches all series of people in his chain of relationship, if one performs bad deeds towards Him, then that also would affect all the people in the line of relationship with such person. Anger towards rAvaNan ended up in destruction of his clan of rAkShasas. Due to the friendship towards mahArAjar (sugreevan), the clan of monkeys flourished.

venRAnai – Like how He destroyed the clan of rAkShasas without missing anyone, He won the war while making sure not even one from the clan of divine monkeys had any trouble.

kunReduththa thOLinAnai – Making the girls of five lakhs families get the experience by creating desperation in them that they cannot survive without seeing krishNan, by holding the gOvardhana mountain as umbrella using the strength of His arm. By this, she asks – Should You who created the longing that does not look for anything other than You, not make me enjoy You?

viri thirai neer viNNagaram maruvi – For helping – those who are living after that incarnation, those who send messengers, and those who get involved in quarrel out of love, is why He lives in thiruviNNagar.

viri thirai neer viNNagaram – place that is suitably cool having plenty of water to match the delicateness of ermperumAn.

maruvi – Leaving paramapadham and living in archA (statue) form in this material world that causes sorrows, is due to excessive love towards His devotees. For a farmer, it would be apt for him to sleep in the place where water flows to the fields, instead of sleeping inside his house. emperumAn is “paththi uzhavan [nAnmukan thiruvanthAdhi – 23]”.

nALum ninRAnai – Him who is standing till the end of period of kalpa.

thaN kudandhaik kidandha mAlai – If He is in standing position, one might think that there is some place else He might be going to. Preventing that thought, Him who is lying down in a resting position in thirukkudandhai that removes difficulties, like saying that He would not leave until all the people of the material world is fully taken with Him to paramapadham.

What is the reason for His being in this world in the positions of standing, sitting, and lying down?

mAlai – It is because He is having excessive love towards His devotees.

nediyAnai – Him who is long; Is it possible for me to talk fully about how much He gives Himself to His devotees? I can only say that He is limitless.

nediyAnai – Him who is easily attainable for others, is being a hard-to-reach-flower for me, she says.

nAyEn – Born in this birth (like a dog) which roams into any house having doors open, and being hit and thrown away from each such house entered, owner having to take bath even if he touches out of happy friendliness;

adinAyEn – Me not having any other place to go than You, such that it is only You who would see me or go away from me, based on your considering of our relationship. Whether it is the time of surrendering or of union, for this AzhvAr there is only Akinchanyam (not having any other source of strength), and sva-dhOsha-kyApanam (presenting own mistakes). That is his greatness.

At the time of surrendering to Him he said, “nAyEn vandhadaindhEn [periya thirumozhi – 1.9.1]. Here when enjoying/experiencing Him, he is saying, “adi-nAyEn”. When this AzhvAr is at the stage of getting his blemishes removed and is going to reach Him, why say like this about himself? It is because this AzhvAr is such, that he thinks that all the good that happened to him are done by emperumAn as instruments for enjoying emperumAn.

What is the reason? –

nammAzhvAr was free from worldly attachment from the time of birth itself, so getting him to gain more and more devotion towards Him is what emperumAn had to do for that AzhvAr. So He made that AzhvAr to be able to say “adhanil periya en avA [thiruvAimozhi – 10.10.11]”.

ninaindhittEnE – Earlier in thirumaNangollai, there is one acceptance He did as He accepted without expecting any qualification from AzhvAr. I thought that that grace should be there till the time AthmA lived. In the state of being parakAla nAyaki the lover, that voluntary grace of emperumAn is said as gAndharva type of wedding, that is, natural union. I thought that such natural union with You should exist till the time AthmA exists, is the thought here.