If periya thiruvadi took Him away, then as said in “yasyaithE thasya thadhDhanam [mahABhAratham – Adhi parvam – 1-77-22]” (~wealth obtained by someone would belong to the one whom they depend on), when emperumAn is under your control, garudAzhvAn who is His property, would also be in your control only. Moreover, garudAzhvAn is naturally subservient to the divine wives of emperumAn. In both these ways, what is the problem in asking garudAzhvAn to not leave? It could be done only if he alone was present with Him; everyone from nithyaviBhUthi came and surrounded Him. He too, unlike earlier, was unapproachable with completeness of His form and greatness; so I could not go near Him and exchange words – so she says in this pAsuram. 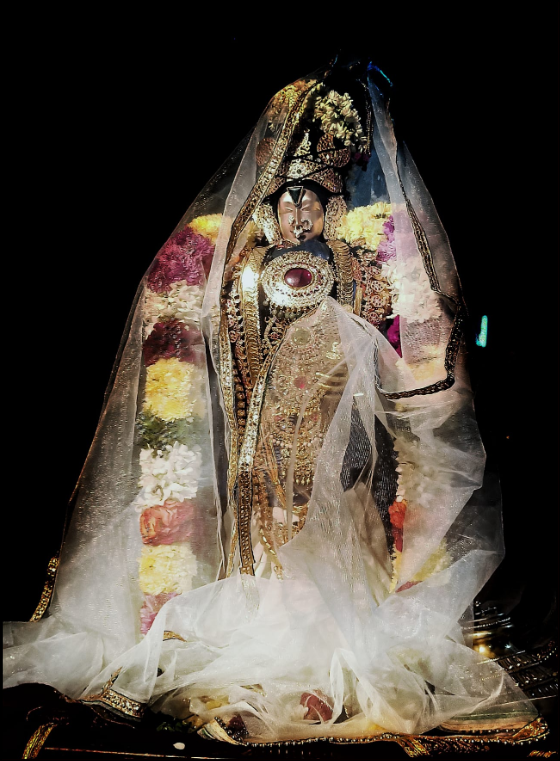 ulaguNda – He who kept in His divine stomach all the worlds during annihilation,

peruvAyar – having such a huge mouth,

ingE vandhu – came to the place I was in,

poru kayal kaN – in my eyes that are like kayal fish fighting with each other,

karumugil – the colour of rainy clouds

maNdi uNda – which after drinking water such that only sand remained

perum pauvam – in the big ocean that is having

peru – and (the stomach of cloud) still having enough space to eat anything more;

arum thavaththu – and the devout ascetics

sUzha – would stand surrounding Him,

and for me to sustain myself when He left me,

UrenRu – said that His place is

pOyinAr – and He left separating from me;

at the time of His leaving itself,

irukaiyil – from both my hands,

iru kaiyil sangu ivai nillA – Not only did He leave, He made unavailable too those things that might calm me down. This is how He left.

kaiyirsangu nillA – Even as He left, longing came into me; saw the bangle in hand – bangle went and stood in front of Him (bangles slipped away even before Him); even if He has left, if the bangles that helped in enjoyment with Him had stayed, I could have seen that and tried to calm me down; may be it is because the arm became thinner – thinking so she saw the other arm;

ivai nillA – Since He is not controllable by my hands (not under my control), He left; should these which are under the control of my hands (worn in my hands), leave too?

ivai nillA – these bangales won’t stay, even if He might stay.

nillA – Like He left even after my telling Him – don’t go, even after pulling it back into my wrist several times, they slipped every time; so she says nillA (won’t stay).

ellE – Oh! (Word that shows sadness). Whether sentient or non-sentient, connection with me is enough for them to not help. Even thinking that it is mine has not made them help; reason for Him not helping is my connection only.

pAvam – Let Him go if He wants to, but reason for the things which were available in my hands to leave is my sins only.

ellE pAvam – Like there is no limit to His good deeds, I have not seen any limit to my sins! Over and above the sin that prevented me from enjoying Him who came here by Himself and mixed with me, the greatness of my sins is such that those that could calm me down are also not helping.

ilangoli neer etc. – She is talking about his form becoming brighter after His union and leaving. Here my body has lost all its colour and is down.

ilangu etc. – This phrase upto peruvayiRRa is showing an example about the greatness of His form that made her lose colour and go down. That is, that His form is like the dark clouds that drank just the water from the whole of sea and without salt etc., and made the ocean empty.

As said in “en oLi vaLaiyum mAniRamum koNdAr [thirunedunthANdakam –23]” (He took away my bright bangles and great colour), His form was as if the brightness in my form and depth of its beauty went and entered Him (and so He became even brighter).

perum-pauvam – This talks about the ocean of pure water that surrounds the seven seas made of salt water, etc.

maNdiyuNda – drank along with the sand from the ocean; or drank with great urge and eagerness. Having great enthusiasm when coming to her for union, and drying up the ocean that is her beauty – such is the brightness in His divine body.

peruvayiRRa – Not getting satisfied even after taking in everything in Him, but having continuous interest in wanting more.

karumugilE oppar vaNNam – By this – it is not talking about emperumAn’s natural colour; it is talking only about the colour that He gained because of winning her over. Like a thunder light embracing dark rainy cloud, in addition to His natural beauty, the beauty of her also got into Him, and His beauty doubled.

maNdiyuNda – Oh I the sinner became the ocean that is drank by the clouds, instead of being the floor to which it rains.

perunthavaththar etc. – Oh you did not get to see how the completeness of His form was, how those who had surrounded Him were, and the greatness of it all was.

perunthavaththar etc. – It is not just one or two who surrounded Him when He left me. Like how the dhEvas surrounded and protected the nectar from the ocean, His people came and surrounded Him after He left me – she says. As said in “Bhakthair-BhAgavathais-saha [saiva purANam, vAyu purANam]” (emperumAn who cannot be known easily by any level of thoughts, is present in the great world of vaikuNtam, along with thAyArs, devotees, (those who are immersed in meditation), and servants), and as said in “vaikunthaththu amararum munivarum [thiruvAimozhi – 10.9.9]”, this talks about nithyasUris (those always living in SrIvaikuNtam).

perunthavaththar – Having the devotion that is asceticism. Devotion is mentioned using the word asceticism in “vaNakkudaith thava neRi [thiruvAimozhi – 1.3.5]”.

Here, by perunthavaththar, it talks about nithyasUris who are dedicated to doing service to Him, and by arunthavaththu munivar it talks about those who are focused more on enjoying emperumAn’s divine qualities. Former ones do services due to devotion, and latter ones do meditation on His qualities due to devotion. That is why it is shown here that the asceticism that is devotion is present in both these types of nithyasUris.

sUzha – Since they understand that they are servants and He is the lord, they surround Him to protect Him. As they are having love towards Him, they surround Him so that nobody else could come close; so I could not go near and stop Him from leaving me.

oru kai etc. – Even if I cross the surrounding devotees somehow, He is standing as the supreme light as said in “sOdhi veLLaththinuLLE ezhuvadhOr uru [thiruvAimozhi – 5.5.10]” , and so is not approachable.

oru kaiyil sangu oru kai maRRu Azhi Endhi (holding conch and discus in His hands) is how He is the ultimate of supremacy. These nithyasUris also do mangaLASAsanam to emperumAn based on discus and conch, like how periyAzhvar did as “vadivAr sOdhi valaththuRaiyum sudar Azhiyum pallANdu [thiruppallANdu – 2]”.

oru kaiyil sangu etc. – The hand that held my hands, and the hand that held my feet are the hands that are destiny for nithyasUris. Like how my hands, legs, etc., became destiny for those hands, those hands became the destiny for them. Like how unparalleled His simplicity was when He mingled with me, His supremacy was also unparalleled as He left me and joined with nithyasUris, and conch and discus. Like how there was no limit to the simplicity He showed when He mixed with me, there was no limit to the supremacy He showed when He left.

ulaguNda peruvAyar – By this – it is not talking about the greatness of saving the world from destruction during the time of annihilation. Since it is SrI rAmapirAn who came, it is talking about His nature. That is – Like how during annihilation the world does not have any shelter other than Him, when He came to me, it was like He did not have any other place to depend on.

ingE vandhu – Only by His coming would the jeevAthmA be able to experience Him (paragatha-sveekAram) – is the sense obtained by this phrase. Like how He came incarnating to save the jeevAthmas, He came here on His own to give enjoyment.

porukayal kaN neer arumba pulavi thandhu – She is saying that this is the benefit (sadness) I got due to His coming and mingling with me.

poru kayal kaN – Other than being an example to each other, the eyes that don’t have any other examples to compare.

kayal kaN – It is comparing her eyes with fish, because like how fish keep moving, her eyes were moving about in excitement due to happiness when He came to her.

neer arumba – The eyes that were happy in that way, have become like this where the tear drops sprout.

arumba – Saying ‘sprouting’ instead of saying ‘flowing’ is – due to the dryness inside because of fire that is separation, tears are not able to flow.

pulavi thandhu – Giving sorrow. As said in “veevilinbam miga ellai nigazhndhanan mEviyE [thiruvAimozhi – 4.5.3]”, He who gives happiness to those who reach Him, is the one who gave me sorrow.

thandhu – This is the big wealth He gave by opening His sack of wealth. Actually it is a great blessing to suffer like this when separated from Him. Since this did not come to her by own efforts, but given by emperumAn’s generosity – she says thandhu.

punal arangam etc. – For me to sustain my life when He leaves, He told me when leaving “my place is thiruvarangam”.

In this pAsuram, ordering of words that gives these meanings is – “ulaguNda peru vAyar ingE vandhu en poru kayal kaN neer arumba pulavi thandhu, ilangoLi neer perum pauvam maNdi uNda peru vayiRRa karu mugilE oppar vaNNam – perunthavaththar arunthavaththu munivar sUzha – oru kaiyil sangu oru kai maRRu Azhi Endhi – punal arangam Ur enRu pOyinAr – iru kaiyil sangu ivai nillA ellE pAvam” (~ EmperumAn considering me as shelter came here, gave sorrow that tears sprouted from my fish like eyes, He who gained the colour like dark clouds with big stomach that drank all the water from the ocean and made it dry – was surrounded by nithyasUris who are servants and meditators – holding conch in one hand, and discus in the other – He went away saying that His place is thiruvarangam – Oh! the bangles that could calm me down would not stay in both of my hands, that is the level of my sins).