This pAsuram also reveals the words spoken by the nAyakan who is engaged with the beauty of the nAyaki’s eyes.

eri – for fire
nIr – for water
vaLi – for air
vAn – for sky
maN – for earth
Agiya – as indwelling soul
emperumAn thanadhu – for emperumAn who is my benefactor, his wealth
vaigundham annAL – she, who is like SrIvaikuNtam (having enjoyability)
kaNNAy – being called as eyes
aru – cruel
vinaiyEn – I, having sins
uyirAyina – life-giving airs
kAvigaL – red water lily
uNNadhu – foregoing food
uRangAdhu – foregoing sleep
uNarvu – knowledge (about true nature of AthmA)
uRum – those who have attained
eththanai yOgiyarkkum – for even the distinguished people who carry out meditation
eNNAy – to think about
miLirum – being radiant
iyalvinavAm – they have that nature

She is like SrIvaikuNtam, which is the abode of sarvESvaran who remains as the indwelling soul of the five elements, fire, water, air, sky and earth.Her two eyes are like red water lily and are the life sustaining airs for me.  Her eyes, which are radiant, are such that even great yOgis, who keep constantly meditating on sarvESvaran, foregoing their food and sleep, would keep thinking of.

uNNadhu . . . – unable to sustain themselves through the pleasures available in this world, with the intellect that this world and its materials are to be renounced, being firm in their minds that only the AthmA which is the goal to be attained is apt, considering that even that entity AthmA is not independent but a conduit for obtaining knowledge about sarvESvaran – even for such yOgis

eNNAy miLirum iyalvinavAm – if such people, as described above, were to become the target of these eyes, even they will discard the supreme entity who they can attain as their nature, and consider these eyes as eminent.

eri . . . – the causal factors of the five elements are representative of the effect factors too [whatever is enjoyed through these five entities]. sarvESvaran has all these as his wealth.

emperumAn – sarvESvaran’s vibhUthis (spiritual and materialistic realms) are the benefits for one. Apart from his auspicious qualities, his vibhUthis are also apt for him.

thanadhu vaigundham annAL – unlike the materialistic realm which is created and destroyed repeatedly, she is like his nithyavibhUthi (SrivaikuNtam) which is never destroyed and which is his natural abode as well as confidential to him.

kaNNay . . . – when such a lady came near me, her eyes, which are the most important limb in her form, which are like the entity AthmA which does not change or does not get destroyed, and which, unlike the AthmA, remain independent and cause harm, indeed harmed me.

aruvinaiyEn – I have carried out such sinful activities that the entity which should protect me, is harming me.

uyirAyina kAvigaLE – when they are with her, they remain as her eyes; when she comes near me, they are like my life.

uyirAyina kAvigaLE – it appeared as if life took a form to harm me.

svApadhESam (distinguished meaning): Thus, for the SrIvaishNavas who are enjoying the SrIvaishNavaSrI  (wealth of service to sarvESvaran) of AzhwAr, this gives their position of dhEvum maRRaRiyEn (we do not know of any other deity). They cherish him because of connection with sarvESvaran. This states how his SrIvaishNavaSrI is so complete that they do not cherish sarvESvaran but cherish him. Those who are engaging with charamAvathi (ultimate position) will not engage with prathamAvathi (primary position) [in other words, AchAryan takes precedence over sarvESvaran, which is the underlying principle of SrIvaishNavam] 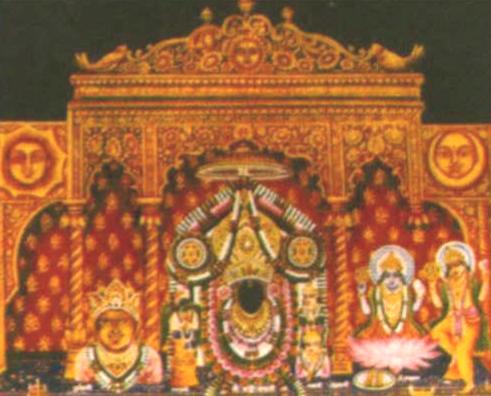 There are two divine abodes here – SrI badhari and badharIkASramam; among those, bhagavAn’s presence here is similar to that of a nursing mother who consumes medicine to cure the disease of her toddler. emperumAn, as nara rishi, being the well-wisher, performs thapasya (penance) here to reform the chEthanas (bound souls), remains without any shortcoming in him, where our lack of approaching him is the only fault; hence let us go and surrender unto him – says thirumangai AzhwAr to his divine heart. Are there any pAsurams where he instructs his divine heart? Yes, previously he said “vadhari vaNangudhum” (let us worship SrI badhari) in every pAsuram of previous decad and also said in third pAsuram of previous decad “aRidhiyAgil nenjam” (Oh heart! If you are knowledgeable) and in this decad too in fourth pAsuram “thuNivini unakkuch cholluvan manamE” (Oh heart! I am giving you a firm advice) – in this manner, throughout these pAsurams, there are instructions to his divine heart. This is the abode of nArAyaNa (rishi) who bestowed the thirumanthram which he meditated upon and recited previously after highlighting that he received the same.