Oh heart! When sugrIva surrendered to SrI rAma, emperumAn bent his beautiful bow to shoot the arrows to make the body of the very powerful, distinguished one named vAli fall apart; such sarvESvaran is present in an expansive manner and is giving audience in the cool, vast gardens where fragrance is blowing, in the distinguished himavAn (Himalayas mountain range); there, huge clouds having small droplets are making tumultuous sounds; large peacocks having feathers, are climbing and dancing to have their lower stomach rub on the peaks of the mountains which are difficult to climb; try to go and reach the dhivyadhESam named thiruppiridhi which is having vast ponds.

This pAsuram comes under the classification of madhiyudan paduththal in thamizh literature. This signifies that the leading man, who had separated the previous day, returns the next day and expresses his desire to the leading lady and her friends when they are guarding the paddy fields (from birds). The opinion is that he expresses his feelings to the friends and, bewildering them, tells them to inform his desire to the leading lady.

mAyOn – belonging to thiruvEngadamudaiyAn (lord of thiruvEngadam), the one with amazing activities
vadathiruvEngadanAda – those who are dwellers of thirumalai which is on the northern side
valli – like a creeper plant
kodigAL – oh women!
nOy – (my) disease
uraikkilum – even if mentioned
kEtkinRileer – you are not listening
O – alas!
numadhu – your
vAyO – mouth?
adhu anRi – or else
val vinaiyEnum – me, who has the sins (to say these words)
kiLiyum – even the parrot
eLgum – to quiver (after hearing)
AyO – is it the sound “AyO”?
thoNdaiyO – is it the lips which are like the reddish fruit
adum – affected (like this)
uraiyIr – please tell the reason for this disease
aRivaridhu – unable to ascertain
The term aRaiyO refers to a battle cry.

Oh women who are like the creeper plant and who are dwelling in thiruvEngadam hills which are to the northern side and for which thiruvEngadamudaiyAn, who has amazing activities, is the lord! You are not aware, on your own, of my disease of separation and are not listening to me when I reveal it to you. You should tell me as to what is troubling me. Is it your talk which is troubling me? Or am I, having lot of sins, the reason for this? Or is it the sound “AyO” which you make to drive away the parrots which are sitting on the trees? Or is it your lips which are reddish like the fruit?

mAyOn – one who has amazing activities. Why is he [AzhwAr] talking about amazing activities here? While emperumAn has paramapadham (SrIvaikuNtam) which is beyond one’s words and mind, he left that and took residence atop thiruvEngadam hills, as said in nAnmugam thiruvandhAdhi pAsuram 47 “gAnamum vAnaramum vEdum udai vEngadam” (thiruvEngadam which has forests, monkeys and hunter-tribe people). This simplicity, even when he is so supreme, is the reason which makes AzhwAr to address him as one with amazing activities.

vallik kodigAL – both terms valli and kodi would refer to women. What is the need for using both terms? This is to affirm that they do not have any of the qualities of masculinity and are full of feminine qualities only. Since creeper plants need to cling on to a supporting pole, he is stressing on the need for holding on to emperumAn for sustaining oneself. The leading man is the only supporting pole and all the other women look up to him as their support.

nOyO – being separated from her, I am neither able to live nor give up my life.

nOy uraikkilum O kEtkinRileer – Looking at my state, shouldn’t you all have come to me and comforted me saying “Oh, your situation has become like this”? Instead of that, I, who am affected with this disease, am coming to you and, I am asking you the reason for this disease. In other words, while you should have got this disease due to separation from me, I have been afflicted with this. This is very strange. You do not have to give any treatment for getting rid of this disease. It is enough if you listen to my outpouring.

uraiyIr – he is imploring those who are not listening to his words “Please listen” thus manifesting his desire towards her. After listening to him, the leading lady’s friends tell him “You have realised on your own that you have the disease. What is there for us to say?” To this, the leading man responds saying “I do not know the reason for this disease. You should tell me that”

numadhu vAyO – is your blossomed face the reason for my disease?

adhu anRi valvinaiyEnum kiLiyum eLgum AyO – is it the sound “AyO” that you make to drive away the parrots (which have come to eat the grains in the field which you people are guarding)?

thoNdaiyO – is it because of your reddish lips?

adum – all these make me perish.

aRaiyO idhu aRivaridhE – I do not know as to which of these troubled  me and caused this disease. For not knowing the reason, he is saying the words aRaiyO as if he were raising a battle cry.

svApadhEsam (distinguished meaning) – SrIvaishNavas were engaged with the qualities of AzhwAr’s AthmA (soul) as well as his dhEham (physical form) such as his pAsurams, his splendour etc, without making any distinction among them.

We will take up the 11th pAsuram in the next article. 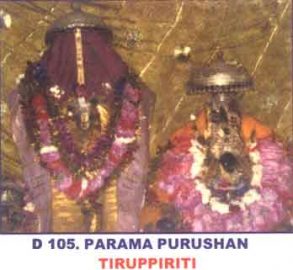 thirumangai AzhwAr having meditated upon the nature of samsAram (material realm) and his own attachment towards worldly pleasures, explained in the previous decad “emperumAn considered such suffering itself as the reason, accepted me out of his nirhEthuka krupai (unconditional grace) and manifested his svAmithvam (lordship)”; rAmAvathAram was spoken about in periya thirumozhi 1.1.6 “ambinAl arakkar verukkoLa nerukki” (suffocated with his arrows to cause fear in the demons) and thirumanthram too. svAmithvam (lordship) and saulabhyam  (easy approachability) are the most important meanings of this thirumanthram. Just as a farmer would build a hut in his field and protect it, arriving at the residence of the entities to be protected and protecting them is saulabhyam. Due to being present in ugandharuLina nilangaL (dhivyadhESams and other abodes where he eagerly arrived and stayed) and protecting the world, his svAmithvam indicates that he is the owner, is shining well. His act of being present as antharyAmi (all-pervading super-soul), waiting to help, without expecting the request of the entities, is due to his svAmithvam. Unlike that, his saulabhyam is well manifested by his presence in temples, to be seen and enjoyed for those who desire to do so, immediately upon having such desire. When one (who is in this world) desires to enjoy bhagavAn after acquiring knowledge about his relationship with him, one cannot immediately serve such bhagavAn with the present body in paramapadham; when one acquires such desire, one can enjoy with the present body only in these abodes in this world. AzhwAr desires to go to all the abodes which are the ultimate manifestation of emperumAn’s saulabhyam and enjoy there; while desiring so, AzhwAr’s desire is not limited to thirumalai (thiruppathi) which is the boundary for thamizh language, and hence will extend up to himavAn (Himalayas mountain range) which is the boundary for such divine abodes; AzhwAr goes up to thiruppiridhi which is in himavAn and sets out to enjoy that abode, along with his divine heart.

In the previous decad, the elimination of hurdles in rAmAvathAram was highlighted through periya thirumozhi 1.1.6 “ambinAl arakkar verukkoLa nerukki” (suffocated with his arrows to cause fear in the demons); through that, AzhwAr remembers about sugrIva mahArAjar being tormented and driven out by vAli and was staying alone; even when he was not requesting for help, SrI rAma went to his place and voluntarily eliminated his enemy and helped him as said in SrI rAmAyaNam kishkindhA kANdam 4.21 “sa rAmO vAnarEndhrasya” (That SrI rAma, was seeking sugrIva’s help). Oh heart! Similarly, to help us, emperumAn has mercifully arrived in thiruppiridhi to help us! You try to go there and surrender unto him – AzhwAr tells his heart in this manner. Previously AzhwAr was attached to those aspects which are visible to his eyes; even after acquiring knowledge about bhagavAn, due to the previous vAsanA (impression), he is going to divine abodes which are visible to the eyes, and enjoying them. It is said in thirunedundhANdagam 6 “thAn ugandha Ur ellAm than thAL pAdi” (going to all the divine abodes of emperumAn which are dear to him, praising his divine feet).