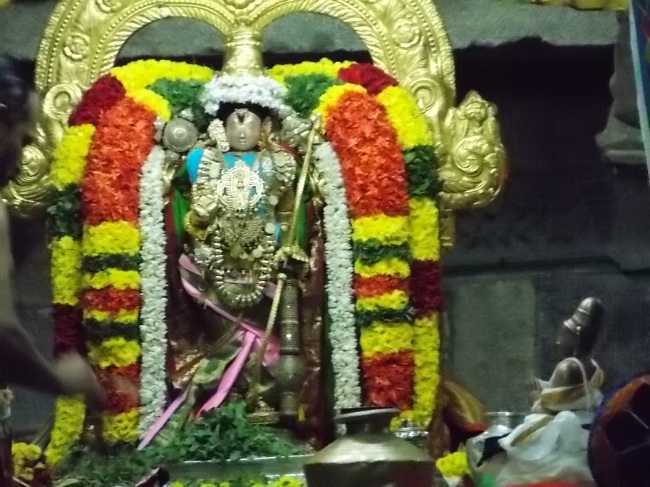 AzhwAr observed that even after totally surrendering to vAnamAmalai emperumAn in sirIvaramangalanagar, emperumAn did not appear in front of him. AzhwAr thought “perhaps emperumAn would accept my surrender in thirukkudandhai” and hence surrenders to thirukkudandhai ArAvamudhan emperumAn highlighting his ananyagathithvam (lack of any other refuge).

First pAsuram. AzhwAr says “I have seen you reclining in thirukkudandhai, making me melt being infinitely enjoyable by me with your beauty and your unconditional relationship”.

emperumAn is my unconditional lord, where my quench is never fulfilled even after eternally enjoying him; oh one who is having infinitely enjoyable greatness! You are agitating me to dissolve and melt my body which is having love as the mood/form towards you, losing firmness to become watery; you are resting in thirukkudandhai which has abundance of heavy paddy crops which appear like fans swaying and having rich water; your abundant beauty and decoration are shining; I enjoyed these by seeing with my own eyes. This implies – AzhwAr has only seen emperumAn and has not interacted with him yet.

Second pAsuram. AzhwAr says “You who assumed many incarnation for the sake of your devotees, are not mercifully glancing at me; what shall I do?”

emperumAn who is my lord, is having a pure form for me to acquire sathva guNam [purely good qualities]; he is showing that form to let me enjoy him and to ensure that I don’t lose my existence; he assumes various incarnations in all species out of his own desire; with the beauty in those forms, capturing the hearts as said in “pumsAm dhrushti chiththApahAriNAm” he appears majestic; oh one who is resting with your distinguished lotus flower like divine eyes in thirukkudandhai where there is abundance of reddish big lotus flowers blossoming everywhere on the water! What shall I do? Implies that – while all lotus flowers are blossoming, your two lotus like flowers [eyes] are not blossoming on looking at me.

Third pAsuram. AzhwAr says “I who am an akinchana (empty handed), do not want my desires fulfilled from anyone other than you; you who made me like this, should see that I serve at your divine feet forever”.

What activity shall I do [to protect myself]! Who [else] is the protector! What are you planning to do to me? I won’t pray to anyone else other than you to fulfil any of my desires. Oh one who is mercifully resting in thirukkudandhai which is surrounded by abundantly firm fort! You kindly see to it that I who am your servitor hold on to your divine feet until the time I am uplifted, for as many days as it may take. aru indicates AthmA which is atomic in nature.

Fourth pAsuram. AzhwAr says “I am suffering having not been able to see you who have descended in thirukkudandhai and resting here even after your being sarvESvara (supreme lord) and I am having the desire to see you”.

emperumAn is having endless qualities, wealth etc and greatness of going beyond the reach of those who have the ability to see further [and further], as much as they can see; he is having all of the world at his service; he is having a distinguished form which is the goal; oh such emperumAn who is resting in thirukkudandhai which is [made up] of those who have great love towards you! To see you and enjoy as desired, I am grieving and looking at the sky, crying out like those who have great devotion and those who worship you. Also explained as crying like a child and worshipping like a matured person.

Fifth pAsuram. AzhwAr says “Having the desire to see you, I have done many acts to invoke your mercy and yet I have not seen you; you should yourself see that I attain your divine feet”.

I cry, worship, dance and see, sing, blabber, look around in all directions due to this powerful sin of love which has embraced me, and hang my head down feeling ashamed. Oh one who is having reddish lotus flower like divine eyes, and resting in thirukkudandhai which is having abundance of attractive water-rich fields! You find out the appropriate means to reach your divine feet for me who is very needy [of your protection].

Sixth pAsuram. AzhwAr says “Since I having been captivated in your enjoyable nature and cannot exist with other worldly aspects, you have to eliminate the hurdles for me in attaining you, and find out the means to attaining you and mercifully seeing to make it work for me even without my knowledge”.

You are mercifully resting in thirukkudandhai which is of those who are having natural glories due to enriched living (of experiencing bhagavAn); you are the controller for nithyasUris; you are like the most enjoyable tune of  the musical instrument yAzh; you are like the eternally enjoyable nectar, one who is enjoyable to the tongue through sthuthis [words of praise]; you are enjoyable to the mind, since you are the result of knowledge; still, you are like the best among the lions, one who is great and hence cannot be comprehended; (I) having seen the ancient aspect of reaching your divine feet and existing exclusively for you, how many more days do I have to exist separated [from you] in this pit of inappropriate desires which is difficult to fill and is dug (through inappropriate pleasures)? Mercifully sever my ancient sins and help me reach your divine feet which is apt for my true nature.

Seventh pAsuram. AzhwAr says “Just out of your mercy, you manifested your beauty etc and made me exist purely by serving you; now, as I cannot exist without your divine feet, please bestow me your divine feet and eliminate samsAram (my connection with this material realm) for me”.

emperumAn is appearing majestic due to his uncontrollable independence, is having reddish divine eyes, is having dark cloud like form which is the abode for previously explained radiance, is having a fire like reddish tall firm form like that of a pearl mountain, is my lord who manifested four shoulders along with that form and accepted me as his servant; you accepted my services through speech etc to have me never separated from your mercy; oh one who is the recipient of my such service in thirukkudandhai appearing along with lakshmi! I will not remain relaxed after this [seeing you being the benefactor along with pirAtti]. Bestow me your divine feet and eliminate my connection with this body along with the traces.

Eighth pAsuram. AzhwAr became so perplexed that he could not think about emperumAn since emperumAn did not appear even after AzhwAr saying “thariyEn” (I cannot sustain); he says “it does not matter whether you protect me or not; let that be so; but you should mercifully see that I am able to meditate upon your divine feet; this is what I need now”.

I am not having any other protector, whether you eliminate my sorrow or not; oh one who is very amazingly beautiful, who is mercifully resting in thirukkudandhai and is having the divine chakra with rounded mouth as weapon! When my body becomes weakened, prANa becomes shaken and the final stage of leaving the body arrives, you only have to allow me to conduct myself holding on to your divine feet in a singular manner without losing the mental strength.

Ninth pAsuram. AzhwAr says “You who bestowed me acceptance towards you and enjoyed me to consider your divine feet as the goal for me, should show me your beautiful walk just as you showed the beautiful reclining posture”.

You being the lord, made me to accept by placing me at your divine feet with the knowledge of their being the means and the goal; you are the leader of the leaders of nithysUris such as anantha, garuda, vishvaksEna et al who are free from disturbances; you are the cause for everything; you are having a form which is greater than all; oh one who is resting in thirukkudandhai which is reached by most expensive, attractive precious gems which are spreading their radiance in all directions to be praised by the world which is removed of the shakiness due to doubt of difficulty  [in attaining him]! You should come for me to see. asaivu il ulagam – asaivu – the world that is swaying in the ocean of sorrow gets captivated in his beauty and praises him. It can also indicate the paramapadham which is unshakable. Or the world can said to be praising emperumAn who is moving his divine body from left to right, while reclining.

Tenth pAsuram. AzhwAr says “You are present inside me and are greatly tasteful, but I am unable to see you physically; though you are present as the easily approachable archAvathAram and I have surrendered to you, how long do I have to suffer in grief like this?”

Instead of walking towards us with your  beautiful form to be seen by the eyes and enjoyed, you are appearing inside me without a [physical] form revealing your amazing qualities; [on top of that] you are also triggering great taste inside the heart of mine who am your servitor, the heart which is the abode of my soul, with an eternal auspicious form which is free from decay and destruction; you accepted my service by speech to destroy my inexhaustible sins; oh one who is having thirukkudandhai as your distinguished abode and being present there! Though being your servant, should I, who am existing exclusively for you and having no other refuge, still suffer with no interaction with you as desired?

Eleventh pAsuram. AzhwAr says “those who learn this decad without any faults will be very enjoyable for SrIvaishNavas just as a kAmuka (beloved boy) is desired by kAminis (beloved girls)”.

krishNa sucked the life through the bosom of the demoniac lady who had bones which resembled a collection of wooden bars and eliminated the enemy/hurdle; nammAzhwAr, the leader of AzhwArthirunagari considered such krishNa’s divine feet which were revealed to him as the only means to fulfil his desire; such AzhwAr mercifully spoke this distinguished decad which is sweeter than the flute which is the source for the sound and tune, among the thousand pAsurams. Those who can recite this decad having been rid of their ignorance, with the same emotion as AzhwAr, will be cared for, by those [celestial damsels] who are having eyes like that of deer, while doing brahmAlankAram [decorating the liberated soul]. Also explained as – just as damsels would desire for their beloved, such devotees who recite this decad will be desired by SrIvaishNavas.