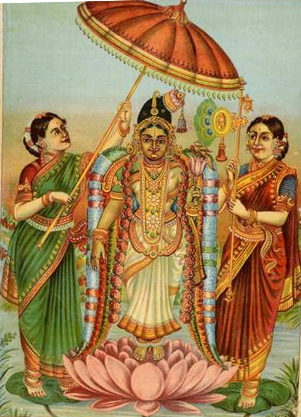 Now, from  the sixth to fifteenth pAsuram, ANdAL nAchchiyAr wakes up ten cow-herd girls as representative of waking up the five lakh cow-herd girls in thiruvAyppAdi (SrI gOkulam). These pAsurams have been organised in such a way that she wakes up ten devotees who are experts in vEdham.

Sixth pAsuram: In this, she wakes up a cow herd girl who is new to krishNAnubhavam. This cow-herd girl is satisfied experiencing kaNNa all by herself. This is the prathama parva nishtai (being anchored in first stage) in experiencing emperumAn. If one understands being together with (other) devotees, it would be the charama parva nishtai (being anchored in ultimate stage).

Birds are flying, chirping, as you can see. Can’t you hear the loud sound emanating from the white coloured conch which is blowing from the temple of emperumAn, who is the lord of garuda, who himself is the chief of these birds?

Oh little girl (who is new)! Wake up! emperumAn [as kaNNa] drank the poison as well as the life of demon pUthanA who came in the form of kaNNa’s mother; stretched his legs in such a way that the demon Sakata who was full of deception was dismembered; he reclined on the mattress of AdhiSEshan at thiruppARkadal, and he is the causative reason for this world. munis (sages) who meditate on such emperumAn and yOgis (ascetics) who carry out service to emperumAn, meditate on that emperumAn and get up in the morning, without giving any trouble to him who is residing in their hearts. Even as they get up, the huge sound of “Hari Hari” which they utter entered our heart and cooled it.

Seventh pAsuram: In this, ANdAL is waking up a cow-herd girl who is well versed in krishNAnubhavam. However, this girl is staying inside her house in order to hear the sweet voice of ANdAL and her friends.

Oh ignorant (who despite having devotion towards krishNa is not realising it)! Can’t you hear the chirping of the Kingcrow bird’s “kIsu kIsu” in all directions? Can’t you hear the sound of churning of curd caused by the movement of shaft by the hands of cow-herd girls, who have fragrant and beautiful tresses and whose ornaments of gold coins and gold beads are making noise? Oh one who is the leader of the cow-herd girls! Even as we are singing about kaNNa who is the incarnation of nArAyaNa, could you remain lying like this? Open the door.

Eighth pAsuram: In this she is waking up a cow-herd girl who is very much liked by kaNNa and who is very proud because of that.

Oh girl who is liked by krishNa! The sky in eastern direction is becoming lighter. The bullocks have been let out for a short time to graze outside and are roaming. We have come to the entrance of your house, stopping girls who are going for a bath considering it as the ultimate benefit. Wake up! If we go and worship kaNNa, who tore the mouth of the demon kEsi, who killed the wrestlers during the festival of bows conducted by kamsa and who is the leader of nithyasUris, he will analyse our shortcomings and bless us speedily.

Ninth pAsuram: Here, she wakes up a cow herd girl who is with the firm belief that emperumAn himself is the means [to attain him] and who is enjoying various charming things with emperumAn. This girl is like sIthAppirAtti who told hanumAn “SrI rAma himself will come and save me”.

Oh the daughter of my maternal uncle who is sleeping on a comfortable bed inside a mansion which is studded with faultless gems, with auspicious lamps shining and fragrant smoke wafting gently! Remove the latches of the carbuncle doors. Oh mAmi (wife of maternal uncle)! Wake up your daughter. Is your daughter dumb? Or is she deaf? Or, is she tired? Has she been kept under protection? Has she been tied down with any spell, to sleep for a long time? We have recited several divine names of emperumAn such as mAmAyan (one who has amazing activities), mAdhavan (consort of SrI mahAlakshmi), vaigundhan (SrI vaikuNtanAthan) etc. Still, she hasn’t woken up!

Tenth pAsuram: In this ANdAL wakes up a cow herd girl who is dear to kaNNa. She is of the firm belief that emperumAn is the means to attain him and is firmly engaged in that, due to which she is much liked by emperumAn.

Oh the girl who has observed penances to continuously enjoy heaven! Though the door has not been opened, will they (those who are inside) not, at the least, utter a word from inside? Did kumbhakarNa, in an earlier time, who fell into the mouth of yama because of emperumAn, who has the divine name of nArAyana, who is praised by us to live for a long time and who grants us service, lose to you and hand over his quality of sleeping for a long time, to you? Oh one who has a beautiful sleep! Oh one who is like a rare ornament! Clear up [from your sleep] and open the door.

Eleventh pAsuram: In this she wakes up a cow-herd girl who is very much liked in brindhAvanam, like kaNNa. In this pAsuram, the importance of following varNASrama dharma (following the rules of one’s class and stage in one’s life) has been shown.

Oh the one who is like a golden creeper, born in the clan of herdsmen, who milk many clusters of youthful cows, who reach the dens of enemies and destroy their strengths and who are faultless! One who is having a waist similar to the spread hood of a snake which is in its nest, and who is like a peacock in its habitation! Come outside. Though all of us, your friends, who are like your relatives, have come to the courtyard of your mansion and are reciting the divine names of emperumAn kaNNa who has the complexion of a bluish cloud, why are you, who are fit for our affection, still sleeping without stirring or speaking?

Buffaloes which have young, nursing calves, taking pity on their calves, are crying out and increasing the quantum of milk in their udders, thinking of their calves. The excess milk thus secreted is making the house very muddy. Oh one who lives in such a house and is the sister of the cow-herd boy who is having the eminent wealth of krishNa kainkaryam! Though we are holding on to the entrance to your house, with dew falling on our heads, and are singing about emperumAn rAma who, in anger, killed rAvaNa , the head of beautiful lankA, and who gives delight to the mind, you are not speaking. At least now, wake up. What a lengthy sleep is this? All the people residing in thiruvAyppAdi have come to know of your sleep.

Thirteenth pAsuram: In this, she wakes up a cow-herd girl who is herself admiring the beauty of her eyes, in solitude. Since eyes generally denote knowledge, it could be said that this girl has complete knowledge in matters relating to emperumAn. She is of the opinion that kaNNa will come looking for her, on his own. Since kaNNa is referred to as aravindhalOchanan (one who has eyes which are like lotus), she is one who has matching eyes to his.

All the girls (who are observing nOnbu) have reached the place earmarked for observing nOnbu, singing the valorous acts of emperumAn who tore the mouth of the demon bakAsura who came in the form of a stork, and who effortlessly destroyed rAvaNa who is the epitome of all harm. The planet Venus has risen and the planet Jupiter has disappeared from the sky. Birds are dispersing in various directions, seeking food. Oh one who has eyes similar to cat and doe! Oh one who has natural femininity! On this auspicious day, are you sleeping in your bed, deceptively (enjoying emperumAn alone) instead of joining with us and having a bath in the cold water?

Fourteenth pAsuram: Here, she wakes up a girl who had given word that she would wake up everyone but still is sleeping in her house.

Oh the one who is complete [in all qualities], who took a vow that you would come and wake us all up! Oh one who is without any shame! On one who could speak well! In the pond at the backside of your house, the red water lilies have blossomed and the blue lily has closed its petals [signifying dawn]. sanyAsis (those who have renounced everything) are going to the temple, with their saffron clothes and white teeth, to blow the conch [signifying opening of the temple]. Wake up to sing about the supreme being who has the divine disc and divine conch held in the beautiful divine hands and who is having reddish lotus-like eyes.

Fifteenth pAsuram: In this, she wakes up a girl who is waiting anxiously to behold the sight of ANdAL and her friends coming to her mansion.

Girls outside: Oh one who is like a youthful parrot! How sweet is your way of talking! Are you sleeping even after all of us have come here?

Girl inside: Oh girls who are complete in all respects! Do not call out to me angrily, like this. I am coming out immediately.

Girls outside: You are very smart in your way of speaking. We know your rude words as well as your mouth for a very long time.

Girl inside: You people are experts in the way of speaking! Let whatever I do be incorrect. What should I do now?

Girls outside: Wake up fast. Do you have any special benefit?

Girl inside: Have all those, who are supposed to come, arrived?

Girls outside: All have arrived. You could come out and take a head-count yourself.

Girl inside: What am I to do after coming out?

Girls outside: Come out to sing about kaNNa who killed a strong elephant, who is capable of draining the strength of his enemies and who has amazing activities.