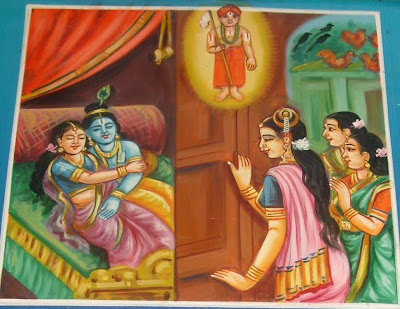 In the sixteenth and seventeenth pAsurams, ANdAL is waking up in samsAram, representatives of nithyasUris such as kshEthrapAlas (guards of the town), dhvArapAlas (guards at the entrance), AdhiSEshan et al.

Oh the one who is guarding the divine mansion of our swAmy (lord) nandhagOpan! Oh the one who is guarding the arch which has flags! You should remove the latch of the door which is embedded with gem stones. kaNNa, who has amazing activities and who has the divine complexion of bluish gem stone, has promised us yesterday itself that he will give us the resounding drum. We have come with purity in our hearts, to wake him up. Oh our lord! Without rejecting this request, you, who are affectionate towards kaNNa, should open this door.

Seventeenth pAsuram: In this, she wakes up SrI nandhagOpan, yaSOdhA and nambi mUththa pirAn (balarAman).

Oh our swAmy (lord) nandhagOpa who donates vasthram (dress), water and food! Please wake up. Oh one who is the head of the cowherd girls who have slender frames! Oh one who is the beacon of the clan of cowherd girls! Oh yaSOdhAp pirAtti, our leader! Be aware. Oh the king of celestial entities who pierced through the sky to rise up and measure all the worlds! You should wake up from your sleep. Oh one who has the victorious anklets made of reddish gold on his divine feet, balarAma! Both you and your brother kaNNan should wake up from your divine sleep.

In the eighteenth, nineteenth and twentieth pAsurams: ANdAL thinks that there is some shortcoming in waking up kaNNan emperumAn. She realises that she has not had the recommendatory role from nappinnaip pirAtti. In these three pAsurams she  celebrates the greatness of nappinnaip pirAtti, the intimacy between her and kaNNan emperumAn, her unlimited enjoyability, her youthfulness, her beautiful divine form, her quality of being his sweetheart and her recommendatory role [in requesting emperumAn to shower his mercy on chEthanas]. Our pUrvAchAryas would say that desiring only emperumAn and forgetting about pirAtti is similar to the state of sUrpaNakA and desiring only pirAtti, leaving aside emperumAn, is similar to the state of rAvaNa.

Eighteenth pAsuram: Since emperumAn did not wake up however much she tried, she thinks that she could wake him up if she tried through the purushakAram (recommendatory role) of nappinnaip pirAtti, and does that. This pAsuram is one which emperumAnAr was very fond of.

Oh the daughter-in-law of SrI nandhagOpa, who has the strength of an elephant and strength of shoulders such that he does not have to step back from a battle! Oh nappinnaip pirAtti! Oh one who has fragrant tresses! Open the entrance door. See how the hens are chirping, from all directions! Look at the flock of cuckoo birds which are chirping from the shed put up for creepers. Oh one who has fingers holding on to a ball of flowers! Open the door with happiness, with the bangles on your beautiful hands resounding well, with your divine hand which is like a reddish lotus.

Nineteenth pAsuram: In this, she wakes up kaNNa and nappinnaip pirAtti, alternatively.

Oh one who is sleeping, keeping your broad divine chest on the divine bosoms of nappinnaip pirAtti whose tresses are well decorated with bunches of blossomed flowers! You have got on top of the cot whose legs are made of elephant’s tusks, with the lamp burning. Please open your divine mouth and speak a word [to us]. Oh one who has her eyes decorated with black pigment! You are not allowing your consort to wake up even for a moment. Wouldn’t you be away from him even for a moment? Not letting him to come near us is neither apt for your svarUpam (basic nature) nor for your svabhAvam (basic character).

Oh emperumAn kaNNa who has the strength to remove the hurdles of thirty three and a crore celestial entities by acting ahead! Wake up. Oh one who has the honesty to protect devotees! On who has the strength to protect! Oh one who has the purity to trouble the enemies! Wake up. Oh nappinnaip pirAtti who has divine bosom like golden dome, who has reddish mouth and slender waist! Oh one who is like periya pirAtti (SrI mahAlakshmi)! Wake up. You should bestow on us materials for our nOnbu such as circular fan made of palm leaves, mirror as well as your husband kaNNa and you should bathe us immediately.