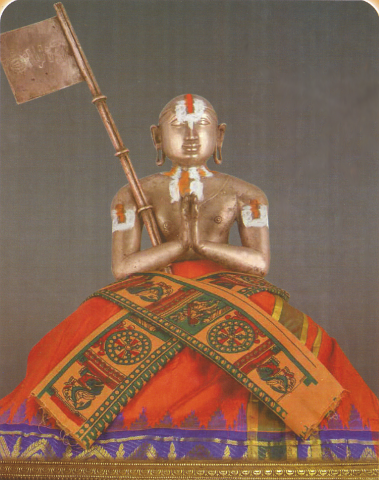 Seventy first pAsuram. emperumAnAr too accepted his request and looked at him with his distinguished glance, thus enlarging amudhanAr’s knowledge so that he will engage with him firmly. amudhanAr feels contented, looking at his great fortune.

Oh rAmAnuja who has the quality of magnanimity due to which you accepted me under you and had greatness! My wavering mind fitted well with your divine feet which complement each other. Affection also increased without any limit for those very sweet lotus-like divine feet. My activities too became totally devoted to your divine qualities. All my past sinful deeds were destroyed by your activity of showering grace on me.

Seventy second pAsuram. amudhanAr becomes joyous thinking of another great benefit which rAmAnuja rendered to him.

Displaying his quality of magnanimity, rAmAnuja destroyed those who were creating trouble and who were anchored in other philosophies [which did not accept vEdhas]. He established the sacred path of vEdhas on this earth. Reminiscing this, with affection in his heart, he mercifully placed me in the group of those who have completeness in their qualities and who praise him with affection. How amazing is this!

Seventy third pAsuram. When told that he could sustain himself with the knowledge and affection bestowed on him by rAmAnuja, amudhanAr responds saying that he cannot sustain himself by any means other than by constantly thinking of rAmAnuja.

rAmAnuja has the magananimity of instructing everyone without considering that the meanings are great [and the people are lowly]. He has mercy which will not tolerate the sufferings of others. He has the coolness of moon in removing sorrows and giving happiness. He imparts great and eminent knowledge to the people in the world who do not even know that they do not have knowledge [about emperumAn], thus protecting them. I do not have anything to sustain myself with other than the strength of considering him as the protector.

Seventy fourth pAsuram. amudhanAr feels happy thinking of the ease with which emperumAnAr achieved compared to emperumAn himself in the matter of winning against other philosophies.

vEdhams exist forever and have not been composed by any person. emperumAn who has amazing knowledge and power, destroys those who cross his order and who have bad conduct in not following the tenets of vEdhams, through his sharp, divine disc. emperumAnAr who is magnanimous like a cloud which precipitates rain for everyone, who has many auspicious qualities and who is our leader, wins over those who do not believe in vEdhams or who interpret vEdhams incorrectly through plans which come to him at each moment.

SrIrangam has fields in which conches will yield beautiful pearls. Even if periya perumAL who resides permanently in Srirangam, comes in front of me holding the divine disc and divine conch in his divine hands, manifesting his divine beauty etc, unsettles my mind which is totally devoted to you and tells me “I will never leave you”, your auspicious qualities will surround me on all sides and pull me towards them, showing their eminence.

Seventy sixth pAsuram. Pleased after hearing this from amudhanAr, emperumAnAr mercifully thinks as to what he could do for him. amudhanAr reveals his desire firmly.

thiruvEngadam which also has the divine name of thirumalai, has beautiful, fully established fame, flowing, long water bodies and is much desired; SrIvaikuNtam is a beautiful divine place; thiruppARkadal is praised by the knowledgeable persons as the abode for emperumAn to take rest while thinking of ways to protect followers. Whatever happiness these three divine places give you, I get the same happiness from your divine pair of lotus-like feet which are sweet and complement each other. Hence you must mercifully give these to me.

Seventy seventh pAsuram. amudhanAr feels contented after rAmAnuja gave him his divine feet just as he had desired and asks him as to what else he is mercifully going to do for him.

emperumAnAr has bestowed on me the most distinguished grace which he had not given to anyone else. He drove away the kudhrushtis who were wrongly interpreting the many vEdhas, with meanings mentioned in those vEdhams themselves. Through his fame he had pervaded the entire world. He removed my previous sinful deeds with their scent. What is he thinking to do for me further, in the divine mind of that magnanimous rAmAnuja?

Seventy eighth pAsuram. amudhanAr speaks about the troubles taken by rAmAnuja to correct him and says that after rAmAnuja has corrected him, his heart will not consider wrongful activities.

Deciding that I cannot be corrected from outside, you undertook troubles which cannot be even thought of, deceived me well since I would have stopped you had I known what you were intending to do and entered my mind. You corrected the fault of AthmApahAram (thinking that AthmA is independent) which I was nursing in my mind. You made me to be a servitor to the consort of SrI mahAlakshmi, by correcting me, just as converting an arid land into an arable land. After you have done all these, no wrong meanings (wrongful activities) which are inimical to my heart, will fit there.

Seventy ninth pAsuram. amudhanAr feels sorry for samsAris (those who reside in the materialistic world) who, though having desire in being uplifted, are lying in a pitiable condition, having lost the hard-to-get knowledge.

rAmAnuja, who is protecting the truthful philosophy in this world, drove away the bAhya and kudhrushti philosophies which continued to spread wrong knowledge about AthmA and was waiting to see if anyone would come with desire in knowing about truthful philosophy. Instead of accepting him as one among them, people of this world are searching for a deity who will uplift them, with their bodies drying up due to worries in their minds. Alas! How they are suffering!

Eightieth pAsuram. When rAmAnuja asked him to forget about the others and reveal what his belief is, amudhanAr says that he will continue to serve those who are affectionate towards the people who are involved with matters related to rAmAnuja.

rAmAnuja is such that all the great people will celebrate him with great joy, from wherever they are staying. I will carry out kainkaryam through my mind, speech and body, without separating from them ever, in all places, at all times and in all states, to those who constantly think of those who believe that rAmAnuja’s divine names are their refuge.