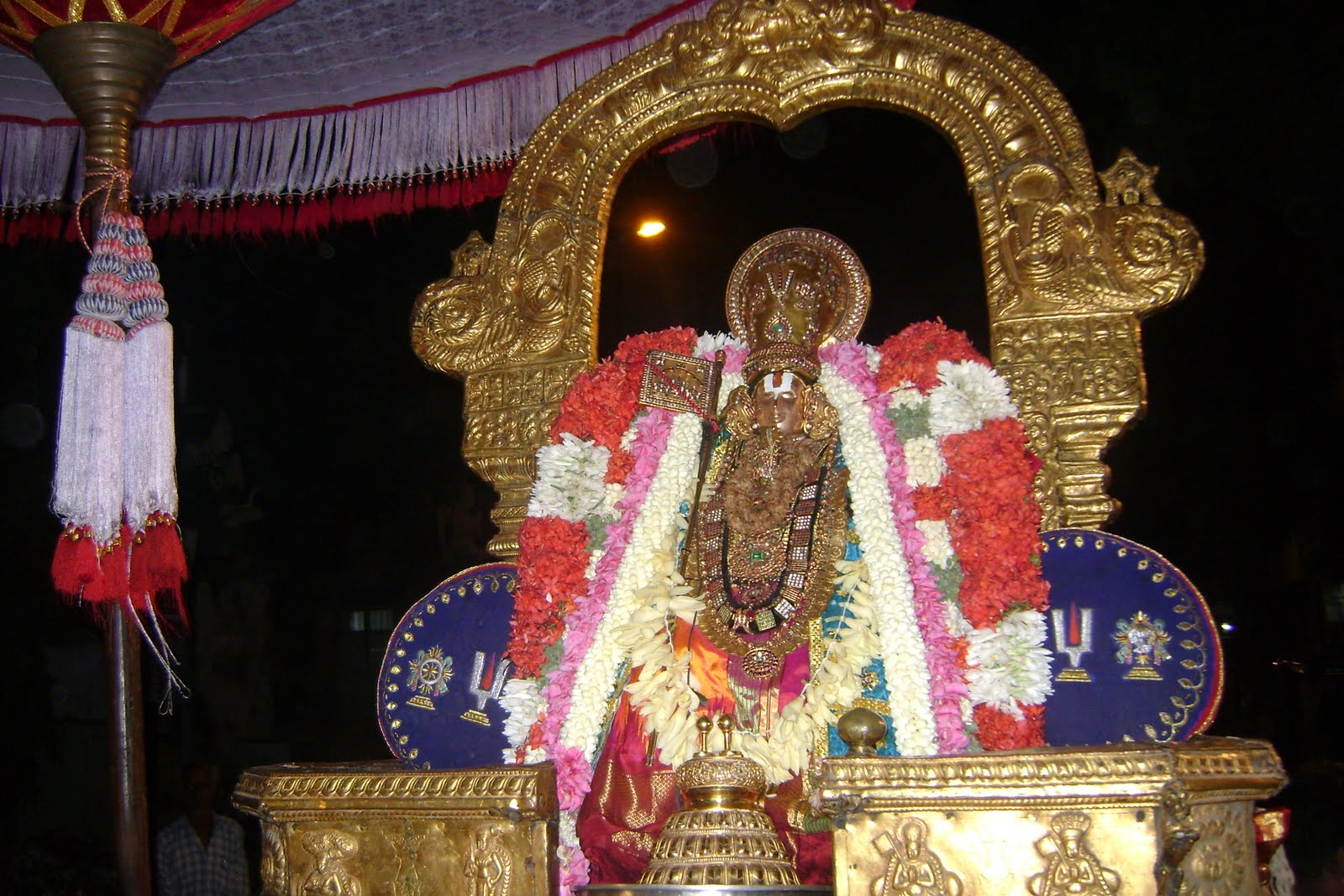 Forty first pAsuram. He says that this world which was not corrected by emperumAn was corrected well due to the incarnation of emperumAnAr.

When our lord, the consort of Sri mahAlakshmi, incarnated in this world in different forms such as human, animal etc and manifested himself to the eyes of people here, they did not see that he is the lord. However, when rAmAnuja, who considered the gain and loss of the followers of emperumAn as his own, incarnated, they got the knowledge which they could not get with their own efforts, and became the followers of SrIman nArAyaNan.

Forty second pAsuram. He is joyous stating that emperumAnAr, with his supreme grace, protected him when he was engaged with worldly pursuits.

I was such that I was caught in the quagmire of desire of not looking at anything other than the bosoms of women who had decorated themselves with apt ornaments. rAmAnuja, who instructed that periya perumAL,the consort of SrI mahAlakshmi, is the lord for all AthmAs and who is without any fault, causelessly and mercifully lifted my AthmA from that quagmire and protected me.

Forty third pAsuram. Reminiscing the way rAmAnuja took him under his wings, feeling very happy, and looking at the people of the world, he tells them to recite the divine names of rAmAnuja and that they will get all benefits.

Oh the fortunate ones because of emperumAnAr’s incarnation! I will tell you all who do not realise the greatness of this matter. rAmAnuja has the glory of driving away kali (fourth among the four epochs) which rages against righteousness. Recite the divine names of that emperumAnAr. As you start reciting, the wealth of your devotion will multiply; knowledge will increase; you will realise the taste of nectar in your mouth. All the cruel sins will disappear totally.

Forty fourth pAsuram. Seeing that no one was engaged in matters related to emperumAnAr despite his instructing them about his greatness, he feels sorrowful about their nature.

Those who live in this expansive world will desire to know as to which the greatest benefit is. rAmAnuja knows the three styles of thamizh, namely prose, music and drama; he knows the four vEdhas of rig, yajur, sAma and atharva; he knows all the innumerable dharma SAsthras (treatises on the path of righteousness) minutely; he also has innumerable auspicious qualities and he is celebrated by SrIvaishNavas. When I tell them to recite the divine names of such rAmAnuja [since they do not realise that reciting his divine names is the greatest benefit], they are not doing that and are asking as to what is the greatest benefit. Alas! How are they like this?

Forty fifth pAsuram. Reminiscing how rAmAnuja corrected him causelessly when he was like the people of the world, being averse towards rAmAnuja, he says that he cannot say through words the great benefit that rAmAnuja has bestowed on him.

Oh rAmAnuja! There is no benefit greater than your divine feet. There is no means other than your divine feet to lead us to that benefit. You have not shown any distinction between those who have realised these two truths fully and me, who has absolutely no clarity in this and have given yourself to me [taken me under your wings]. It is beyond words for me to state this truthfully.

Forty sixth pAsuram. Reminiscing the benefits bestowed on him by rAmAnuja, losing out to his quality, he worships at the divine feet of rAmAnuja.

thiruvAimozhi, mercifully given to this world by nammAzhwAr and celebrated as the dhrAvida (thamizh) vEdham, made the six bAhya mathams (those which do not believe vEdham) crumble down completely. rAmAnuja who learnt and knew such thiruvAimozhi entered my heart mercifully so that even I, who had no knowledge about it, gained clarity [as mentioned in the earlier pAsuram about knowing the benefit and the means to attain that benefit]. We bow down to such rAmAnuja who has auspicious qualities which have spread in all directions.

Forty seventh pAsuram. emperumAnAr creates a taste in everyone towards emerpumAn (engages them with emperumAn). Reminiscing the benefits that such rAmAnuja had done for him, amudhanAr says that there is no one who is his equal.

rAmAnuja mercifully stated the truthful knowledge that periya perumAL alone is the refuge and the supreme entity who is to be worshipped by everyone in this world. Such rAmAnuja entered my heart, stayed there, without distinction between day and night, as if there is no other place equal to that and removed my bundle of sins which could not be eliminated by me through my efforts. There is none who is my equal, because of his mercy.

Forty eighth pAsuram. Hearing his words, rAmAnuja told him that this happiness will not last for him either if amudhanAr leaves rAmAnuja or vice versa. Responding to that, amudhanAr says that when the refuge for his lowliness is rAmAnuja’s mercy and and the object for rAmAnuja’s mercy to give refuge is his lowliness, there is no reason for either of them to separate from the other.

For my lowliness which does not have any parallel, there is no refuge other than your grace, which accepts me only because of that lowliness. For that grace too, only the lowly people are the receptors. Hence there is no refuge [for your grace] other than my lowliness. Oh rAmAnuja who has the greatness to be spoken of by those who are without any faults! Since this is the benefit for both of us, what is the reason present for us to separate needlessly?

Forty ninth pAsuram. Reminiscing the abundance that the world has got after the incarnation of rAmAnuja, he feels joyous.

Honey flows from blossomed flowers of lotus like water to irrigate the fields in SrIrangam. emperumAnAr is constantly keeping the divine feet of periya perumAL, who is reclining in the big temple at SrIrangam, on his head and is experiencing it by immersing in it. Since emperumAnAr incarnated on this earth and is fully engaged in the path of vEdhas, the path of righteousness which was earlier in an affected state has now got enlivened; the six false philosophies which did not accept vEdhas have got annihilated; the cruel kali also has got destroyed.

Fiftieth pAsuram. He feels happy thinking about the deep affection that he has towards the divine feet of rAmAnuja.

The two divine feet of emperumAnAr, who has auspicious qualities which are natural, ancient and which have spread throughout the world and who is the lord of all ascetics, have the quality of shining in the divine hearts of supremely qualified people. They [divine feet of emperumAnAr] will create fear in the hearts of those who do not believe in vEdhas and those who wrongly interpret vEdhas and will act alternately [be good to some and be bad to some]. They accepted and donned the collection of verses composed by me, which are packed with abundant and famous faults.